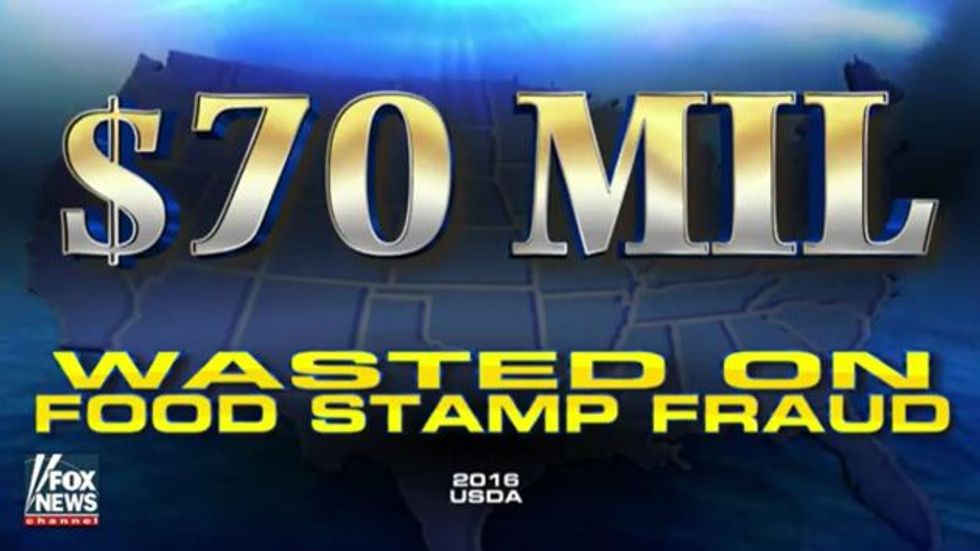 Oh, this? Never mind this.

Ohai there, Fox & Friends! What's up? Have a new fake story "just asking" whether we need to eliminate food stamps because there's "record levels" of "fraud" in the system? What's that? You're actually correcting the story and apologizing for it? Well! Knock us over with a feather! Maybe one from the Giant Chinese Donald Trump Chicken.

On Wednesday, Fox & Friends ran a breathless story alleging 2016 had seen a record amount of fraud in the Supplemental Nutritional Assistance Program (SNAP), which replaced the old paper food stamp coupons with a government-issued EBT card, albeit one that still isn't well-camouflaged enough that rightwing morons won't scream at families using the thing. Among other things, they had that big onscreen image up there claiming there'd been $70 million in food assistance fraud, attributing the number to the USDA, and asking the hard-hitting question, "So is it time to end the program altogether?" Which is kind of a stupid question, like asking whether we should eliminate funding for PBS because Jerry Falwell thought a Teletubby was gay. OK, bad example. It's more like saying "Ford had to recall some defective cars. Should we eliminate the Interstate Highway System?"

In any case, the USDA told the Washington Post, Nuh-uh, that number's not from us:

“We are not quite sure where this came from,” a USDA spokesperson tells the Erik Wemple Blog. “We saw that there was a story on Breitbart. We have not issued a report on this recently. There is no new rate that we’ve published. So we’re not quite sure why they’re so interested in stirring this up.”

Yr Wonkette likes how Erik Wemple calls himself "the Erik Wemple Blog." More of us should use that variation on the editorial "we." So, no, not an accurate number, and Fox has a very loose definition of "fraud," anyway, usually suggesting that somehow all SNAP beneficiaries are eating crab legs, organic salmon, and lobster -- it's always seafood with these people, which is how you know it's not the 1970s, or they'd be condemning all the food stamp bums eating steak.

Now, there is a USDA report from 2013 that addressed the issue of one kind of food stamp fraud, the "trafficking" of benefits, where unscrupulous retailers illegally exchange cash for SNAP benefits; that report found a tiny increase between 2009 and 2011, from 1.0 percent of SNAP benefits to 1.3 percent, but also that trafficking overall was way down from the mid-1990s, when it was 4 percent.

Also, too, the report said the dollar amount of that 1.3 percent fraud rate actually came to a much higher dollar cost: About $853 million, not $70 million. As Wemple notes,

So even as it reported that food-stamp fraud had hit an all-time high, Fox News was actually reporting a preposterously low number for food-stamp fraud. Only a program as idiotic as “Fox & Friends” is capable of such feats.

The apology noted the long-term reduction in trafficking since the '90s, but we still have some quibbles -- Huntsman could have pointed out that 1.3 percent is a pretty low rate of fraud for such a big program, and as the 2013 report noted, the 2009-2011 increase in fraud appeared to be related to the growth in the SNAP program during the Great Recession, as more retailers were authorized to participate in SNAP. Whenever the next USDA study on trafficking is done, it seems reasonable to expect the trafficking rate will decline. It will never be zero, though, so don't expect Fox to ever say, "Gosh, that's an impressively well-run program."

We have a feeling the main reason Fox did an on-air correction was that they got the chance to say the dollar amount of fraud was actually higher than what they initially reported, regardless of the overall reductions in fraud: EVEN BIGGER NUMBER! END THE SNAP PROGRAM! SOMETHING SOMETHING LOBSTER AND ALSO CANNED CLAMS!

Which, in a way, is a bit of a relief. We were worried that, combined with the Cubs winning the World Series and Donald Trump winning the presidency, a Fox News correction and apology might truly have been a sign of the Apocalypse.