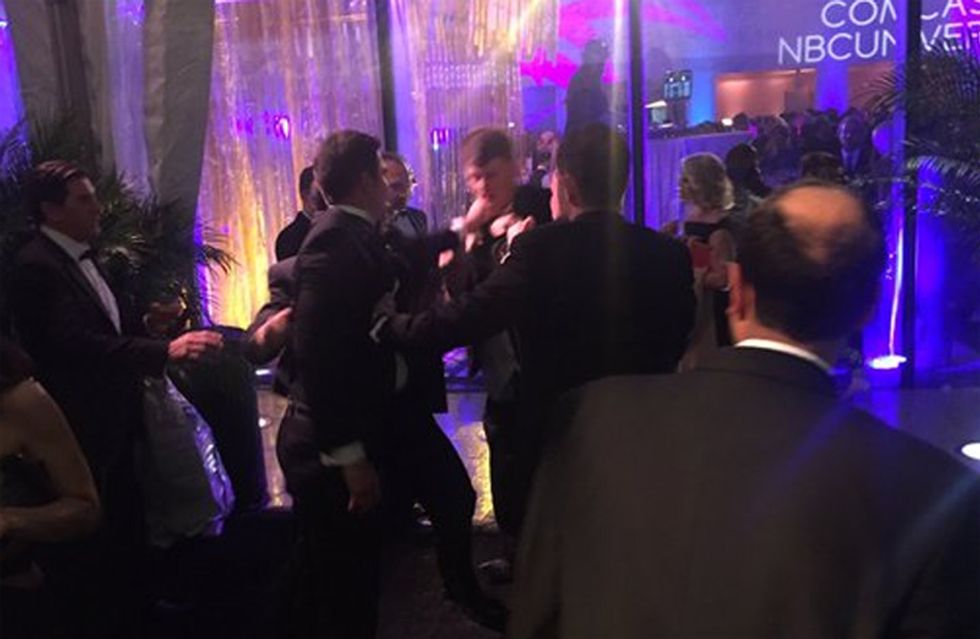 Fox News's insufferable little prick Jesse Watters got himself into a brief fuck-tussle with Huffpo reporter Ryan Grim Saturday night at the MSNBC afterparty following the White House Correspondents' Dinner. Watters, best known now as Bill O'Reilly's smug underling who does deadly unfunny person-on-the-street interviews, used to specialize in "ambush" interviews where he would pop up at journalists' homes, and ask them loaded questions, like "Why haven't you stopped beating puppies with copies of the People's Daily Worker while reading Mein Kampf to toddlers?" The Washington Post has an exciting account of the action -- which, we should note, all took place at a party "held at the soaring U.S. Institute of Peace building in Foggy Bottom":

Here’s how it went down, per several witness: Grim and Watters were among a group located in a heated tent just outside the main party area. The two apparently don’t have a personal relationship, but Grim realized who Watters was and recalled a beef he had with the “O’Reilly Factor” correspondent that dated back to 2009, when Watters, known as an “ambush journalist,” had engineered an on-camera confrontation of writer Amanda Terkel, now a HuffPo colleague of Grim. Terkel’s account of the incident was headlined “I Was Followed, Harassed, And Ambushed By Bill O’Reilly’s Producer.”

Grim decided to give Watters a taste of his own medicine, whipping out his camera phone and filming him. Watters didn’t take well to this, eventually snatching the phone away from Grim and putting it in his pocket. Grim set out to retrieve it, and a scuffle ensued. No cinematic sparring or broken beer bottles, witnesses said, but the two flailed around a bit, upending a table and bumping into several people.

No doubt we'll be hearing all about the inherent thuggish violence of the Liberal Media, since Grim clearly started it by trying to get back the smartphone Watters had quite reasonably grabbed and pocketed. The fight was quickly broken up by Sean Spicer, the Republican National Committee communications director, who said he was "Just trying to keep the peace." We're disappointed he didn't have the presence of mind to shout, "Gentlemen! You can't fight here! This is the Peace Institute!"

Chez Pazienza at the Daily Banter had some decidedly unpacifistic thoughts about the tiff:

On more than one occasion I've vocalized an ongoing fantasy I have that involves myself or someone I've paid a tidy sum of money to hitting Watters in the face repeatedly until the self-satisfied smirk that's become his trademark at Fox News is wiped clean off. Granted, it's only a fantasy, but if you know anything at all about Jesse Watters, you know that any individual with a thimbleful of empathy or intelligence wouldn't mind seeing something like this happen. Violence is wrong, sure. But let's face it -- some people just cry out to have it visited upon them.

That's not very peacey, man. Still, we are at least sympathetic to the idea that "somebody needs to buy Grim a nice bottle of Macallan 25 because just by taking a swing at Jesse Watters he did the Lord's work." Let's not make a habit of encouraging violence, though, because you know, we've got Rules, right? Mr. Grim has not addressed the incident beyond a couple of tweets later that night:

Asked for comment, a Fox spokeswoman said the most Washington thing ever: “Jesse will address the issue tomorrow night on The O’Reilly Factor.” Meanwhile, Grim was unrepentant. “Ambush guy can’t take getting ambushed,” he said. “Maybe he should think about his life choices.”

Christ, you know what this means. We have to set our Tivo to record the stupid "O'Reilly Factor." Thanks a hell of a lot, Ryan Grim.