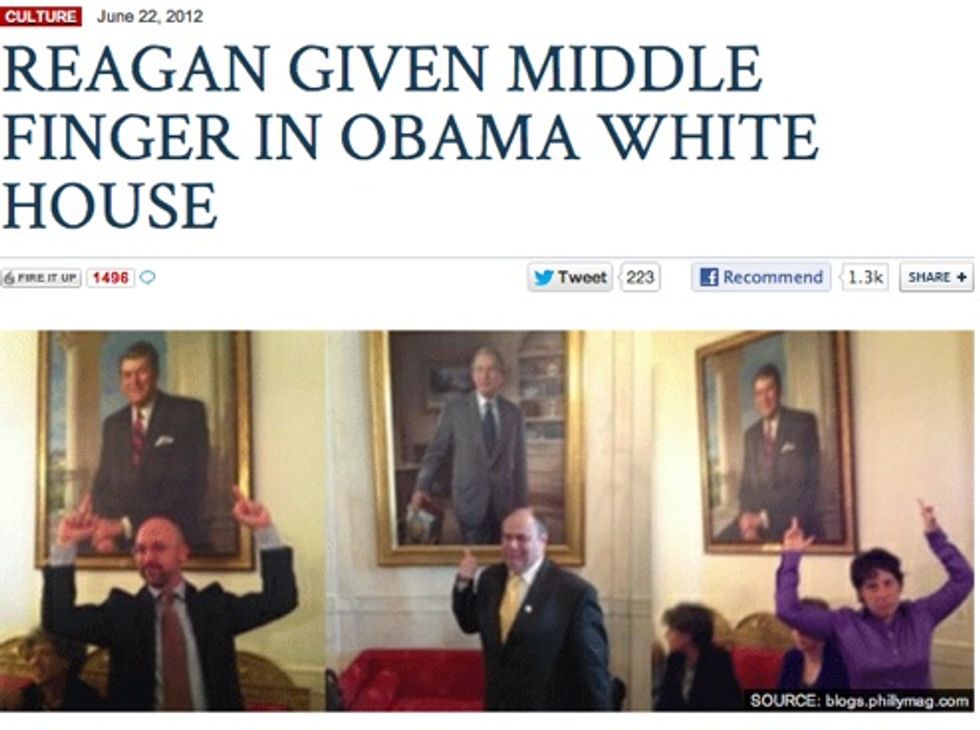 It's Friday, should we allow Fox Hip Hop BBQ Nation to troll us? Oh, it's never a choice. Here's the latest: "REAGAN GIVEN MIDDLE FINGER IN OBAMA WHITE HOUSE." The photo shows Barack Obama and Michele Obama and Eric Holder wearing Che shirts and, yes,flipping off St. Ronaldus Magnus. Or are those just some gay people from Philly? Democrats all look the same.

Fox Nation links to an article in Philadelphia magazine, which bears the more appropriate headline "What Happens When You Let Gay Philly Activists Into the White House."

Last Friday, an attaché of important gay people from Philadelphia made a trip to Washington D.C. as invited guests of President Barack Obama for the White House’s first-ever gay pride reception. There, they danced to the sounds of a Marine Corps band; they dined on crab cakes and canapés; they hand-delivered letters from concerned citizens like this 18-year old who has had four people close to him gunned down, and noted rhyming raconteur CA Conrad; and some of them took advantage of photo opportunities to give the late President Ronald Reagan the middle finger.

Why President Obama instructed them to do this is a real question. It's not like gay activists would have any reason to dislike Ronald Reagan, who didn't acknowledge AIDS as a problem for the first six years of his presidency. Thank God we only have a few more days until the Supreme Court rules that Obama is no longer president.