Fox News And GOP Expose Robert Mueller As Kenyan Obama Gay From Hillary-Town, It Is Just So Obvious 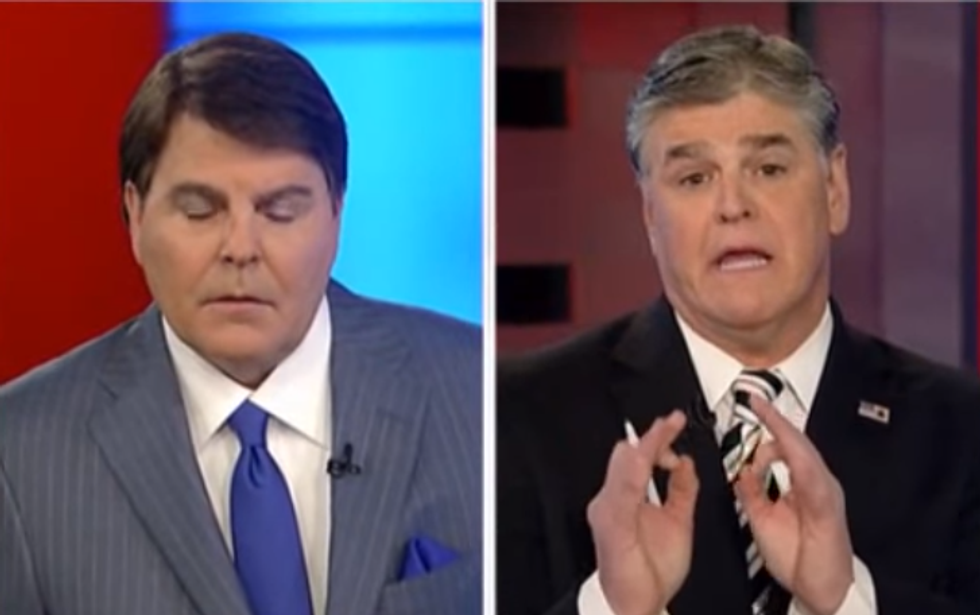 We say that because it's obvious special counsel Robert Mueller is getting VERY CLOSE and things are getting VERY HOT in the kitchen for Trump and his people in the Russia investigation. If Wonkette can see the outlines of a massive quid pro quo between the Trump campaign, the Russian government, and all their various cut-outs, not only to steal the election, but to institute something much greater, where rich fucks conspire with each other to basically steal the world and run off with the profits, then Robert Mueller can probably tell you the whole goddamn story through interpretive dance or shadow puppets or, hell, he could put on a wig and some big opera lady boobies and sing it to you in Italian. BUT YET HE WON'T. He's holding his cards very close, and he'll let us know things when he's ready for us to know things.

All this means the GOP and its slobbering cockwaffles at Fox News are in APOCALYPSE mode, throwing every piece of shit at the wall they can find to discredit Mueller and discredit the FBI, in a desperate attempt to either convince Donald Trump to try to pull a Saturday Night Massacre, or to set up a scenario where Trump can pardon 50 people in one fell swoop and (32 percent of) PEOPLE WILL BE OK WITH IT. (Or both.)

We're not going to scour the internet for one million examples of this fuckery. Instead, we'll give you two prime examples of the genre, both available thanks to the wonders of "YouTube." The first is from Chris Hayes's show Thursday night, and it is a compilation of truly batshit Republican congressmen like Louie Gohmert and Matt Gaetz, telling new FBI Director Chris Wray about how the FBI sucks and Robert Mueller sucks and your mom sucks, blah blah blah blah blah. Here, watch it!

Here are some dumb pull quotes from dumb GOP congressmen:

JIM JORDAN: "If you kicked everybody off Mueller's team who was anti-Trump, I don't think you'd have anybody left!

MATT GAETZ: "Did Bob Mueller recruit people to his probe that had a bias against the president?"

Louie Gohmert gave Wray a laundry list of names of FBI people he's heard on Fox News, asking if they were BIASSSSS against Trump. Wray defended each and every one of his people, which probably just proves the squirrels inside Gohmert's brain are right that Wray is part of the DEEP STATE CONSPIRACY!

One of the names they're so het up about is Peter Strzok, whom Mueller fired from his team for sending anti-Trump sexts to his FBI girlfriend. Strzok is their new Pizzagate and Benghazi and Michelle Obama Whitey Tape, all wrapped up in one FBI dude. Of course, intelligence and expertise have a well-known liberal bias, so if Mueller is picking the FBI's best and brightest for his team, he's probably going to end up with a few good men like Strzok, as opposed to a bunch of paste-eating Trump supporters who play with their poo. Of course, there's zero indication Strzok's personal political beliefs interfered with his ability to do his job. Regardless, Mueller fired him! Get it, Republican dipshits? Mueller found a person he thought might appear biased and he got rid of him. Problem solved, right? The fuck you say!

That is their whole "scandal" with Strzok. Oh, and we forgot, Strzok led the investigation into Hillary Clinton's emails, and she hasn't been executed for EMAILS, therefore he is bad. In these people's addled shit-fer-brains, if you don't accept as Gospel Truth that Hillary Clinton is a murderous radical Benghazi email crimer, then you are obviously not qualified to do an FBI job.

They are also pissed off about one of Mueller's prosecutors, name of Andrew Weissman, who spoke approvingly of former acting attorney general Sally Yates telling Trump to fuck off with his Muslim ban, instead of doing what a REAL AMERICAN would have done, which is bow before King Trump and kiss his taint, regardless of the legality of what King Trump was doing.

Yes, these Republicans are bad at being Americans, and their "scandals" are dumber than dogshit, just like Uranium One was. ("Uranium One" seems to have barked itself to sleep as soon as Michael Flynn was caught doing "uranium.") Did you expect something of substance? You are silly.

Here's a Fox News Two Minutes Hate rage frottage clip of Sean Hannity and Gregg Jarrett (Fox News "legal" "analyst"), furiously rubbing their dicks up against each other while they say the FBI is now THE LITERAL KGB. (It's funny because the actual rebranded KGB -- now called the FSB -- led by former KGB guy Vladimir Putin, helped steal the election for Sean Hannity's daddy Trump. Isn't that funny?)

Somne transcript, along with what Wonkette would have said had we been a guest on Hannity:

JARRETT: I think we now know that the Mueller investigation is illegitimate and corrupt. And Mueller has been using the FBI as a political weapon. And the FBI has become America's secret police ... It's like the old KGB that comes for you in the dark of the night, banging through your door!

HANNITY: By the way, this is not a game. This is not hyperbole you're using here!

JARRETT: No! Ask Paul Manafort. They came for him and broke through his front door ...

HANNITY: And if it can happen to him, Gregg ...

JARRETT: It can happen to all of us!

WONKETTE: First they came for Paul Manafort, but I did not care because I was not a foreign agent money launderer for Russia and Ukraine, allegedly.

As a bonus, CNN's Brian Stelter lovingly collected screenshots of Fox News this week, starting with Tucker Carlson caterwauling about a "tainted probe," which is funny, because that's what we call Tucker Carlson's penis:

These are such weird, mentally and morally undeveloped people. We would feel sorry for them if they weren't destroying America.

For an exhaustive roundup of state-run Fox News North Korean propaganda TV and its behavior regarding Mueller, there's a Media Matters for that.

Sure wish somebody would make a simple tweet explaining what this all means. Oh hi, Sarah Huckabee "Poot Lips" Sanders in 2016!

If there is any silver lining to this fuckery, it's that the American people are decidedly not buying it. According to the latest from Pew Research, Trump's approval rating is a weak and sad 32 percent. Fully 59 percent of Americans believe Trump people either "definitely or probably" colluded with Russians, and 56 percent either "somewhat" or "TOTALLY OMG" trust Robert Mueller to do a fair investigation. In other words, a very large majority of Americans are not falling for the time-wasting unpatriotic horseshit being spewed by Donald Trump, GOP congressmen, or the fucking loons on Fox News. They've got about 30 percent of the American people on their side, and it seems these days that those 30 percent are pretty much the ceiling when it comes to supporting Trump.

Of course, that pant-shitting moron 30 percent might riot when Robert Mueller starts locking folks up in earnest. But we guess we'll just cross that bridge when we get there. Considering their track record, it's just as likely they'll start busting their Keurig coffee machines again and, left with no coffee, go to Starbucks, hand over seven bucks, and insist to their bemused baristas that their name is "TYRANNY!" or "URANIUM ONE!" because making baristas write that stuff on coffee cups really sticks it to the liberals.

Shit's gonna get weirder from here. Get ready.