Fox News: Eric Holder Really Should NOT Have Shot Those Cops In Ferguson! 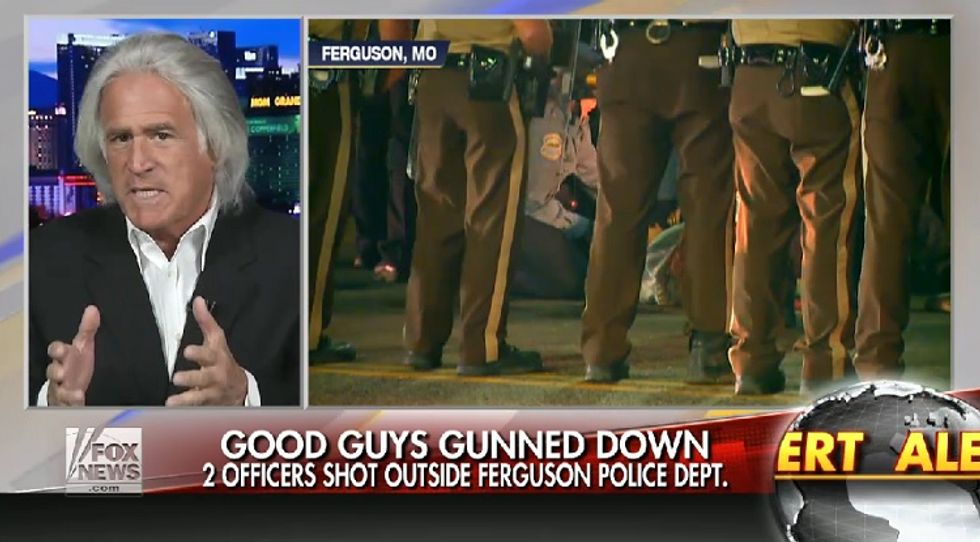 While two police officers were still hospitalized after being shot in Ferguson, Missouri, early Thursday morning (they have since been released), and police have no suspects, Fox News and other rightwing sources have identified the true culprits: Attorney General Eric Holder and everyone who's ever protested against police brutality.

Fox & Friends treated us to a double dose of analysis; first, Las Vegas attorney Bob Massi, one of Fox's go-to analysts for explaining how white people are victimized by Eric Holder, explicated how Eric Holder had personally incited the shootings of the cops by being far too incendiary in the Justice Department's report on systemic racism in Ferguson's police and court system.

Massi was particularly incensed by Holder's "inflammatory" suggestion that Ferguson needed to make changes, citing a Friday press conference when Holder said "We are prepared to use all the power that we have … to ensure that the situation changes there." When asked if that could include dismantling the police force, Holder said, "If that's what's necessary, we're prepared to do that."

Massi explained that Holder was secretly sending a coded message to thugs that it was just peachy with him if they murdered some cops:

“The attorney general of the United States, you don’t make a statement like that,” Massi said. “That sort of casts the net not only on Ferguson, but it’s all about perception. When you cast the net, these police officers who protect us every day, this incites race relations in this country worse than it’s ever been. … When you say you’re going to dismantle a police department if they don’t fix it, it incites race relations. It incites riots.”

We suppose that we could point out that other police departments with systemic problems have also been dismantled, such as the department in Jennings, Missouri, which was disbanded in 2011 after a federal investigation due to corruption and racial issues. That action was accomplished without any riots, but then again, Jennings is where Darren Wilson was employed before working in Ferguson, so ultimately, we guess Massi could argue that by dismantling the Jennings department, Holder also was responsible for killing Mike Brown.

Massi also noted that since the protest continued until after midnight, the protesters were obviously trying to cause trouble and maybe provide cover for violence: "Who goes together at 11 or 12 o'clock at night, unless it's designed to make it more difficult for officers... It's almost like a predisposed move to cause this kind of problem." Steve Doocy did at least note that there have been nightly protests in Ferguson since August, but quickly moved on to encourage Massi to explain his belief that the investigation of the Ferguson PD was initiated only because there was no indictment of Darren Wilson. Elisabeth Hasselbeck also chimed in to note the correlation between the release of the DOJ report on Ferguson and the shooting: "And now, fuel on the fire, less than a week later, we are seeing the dots connecting here in Ferguson."

Just to make sure the bingo card was full, Massi closed by asking, "Where's Al Sharpton about the two police officers who just got shot? Where's he at?"

“I kept hearing yesterday the protesters finally got what they wanted, Chief Jackson stepped down,” Roorda said, referring to Police Chief Tom Jackson’s resignation. “They didn’t get what they wanted when Tom stepped down. They got it late last night when they finally, successfully shot two police officers.”

Brian Kilmeade wanted to know why people were even rallying at all, considering that six people have already been forced out of Ferguson government positions. "The Justice Department ruled in a way in which I imagine was right up your alley. What else do you want?"

“Dead cops, that’s what they want,” Roorda said. “Let’s not pretend like they wanted Tom Jackson’s resignation or they’re mad because Mayor Knowles is still there. They want dead cops. That was their goal all along and that was their goal last night.”

The two police officers who were injured have now been released from the hospital, so apparently Roorda will have to revise his statements to clarify that the protesters' unslakable thirst for police blood is still not satisfied, so perhaps to be on the safe side some more protesters' heads need to be busted.

For his part, verbal triggerman Eric Holder issued a statement calling the shootings "inexcusable and repugnant":

I condemn violence against any public safety officials in the strongest terms, and the Department of Justice will never accept any threats or violence directed at those who serve and protect our communities — from this cowardly action, to the killing of an officer in Philadelphia last week while he was buying a game for his son, to the tragic loss of a Deputy U.S. Marshal in the line of duty in Louisiana earlier this week. Such senseless acts of violence threaten the very reforms that nonviolent protesters in Ferguson and around the country have been working towards for the past several months. We wish these injured officers a full and speedy recovery. We stand ready to offer any possible aid to an investigation into this incident, including the department's full range of investigative resources. And we will continue to stand unequivocally against all acts of violence against cops whenever and wherever they occur.

Yr. Wonkette anticipates that Holder's suggestion that "reform" of any sort is necessary will be deemed an insult to the memory of the injured officers and a call for additional mob violence. Why must he be so divisive and inflammatory?

Oh, actually, we don't have to anticipate anything of the sort -- moments after we typed that paragraph, we looked at the Gateway Pundit, where Former Stupidest Man On the Internet Jim Hoft had this insight on the Holder statement:

In Holder’s fantasy world these protesters are nonviolent.

And apparently protesters also are responsible for people firing guns from several hundred yards away from the protests, because they just are, OK?