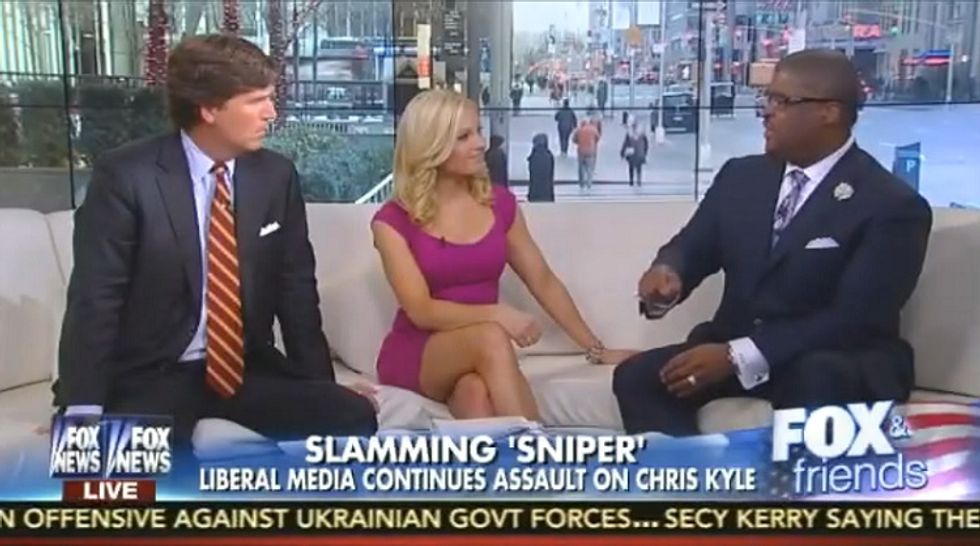 In case you missed it, the latest litmus test for whether you Love America Enough is whether you are an enthusiastic supporter of the movie American Sniper, which you have to love or you are a hater. You see, Michael Moore said unkind things about the movie's glorification of snipers, who are the kindest, bravest, warmest most wonderful Americans you've never seen because they are invisible like ninjas, and therefore The Entire Left hates America all over again, and now it is the sacred duty of all rightwing media to RAGESCREAM AT THE AMERICA HATERS WHO HATE CHRIS KYLE PERSONALLY AND ARE PISSING ON OUR BOYS' GRAVES.

And so we get this bit of stuff from Sunday's edition of Fox & Friends, in which we learn that Howard Dean also hates America for noting that professing love for American Sniper has become a rightwing shibboleth, and also Michael Moore is a bad American all over again for suggesting that Jesus wouldn't shoot people (or at least wouldn't use a .50 caliber rifle with a scope). Here's Moore's latest provocation, although Fox only includes the first tweet in its video:

And because Michael Moore speaks for all of The Left and all of Hollywood (which is where Clint Eastwood's Hollywood movie about snipers was financed, produced, and is making a tidy profit), we can look forward to more things like this very interesting video, in which Tucker Carlson, Anna Kooiman, and Charles Payne explain why saying anything against this excellent movie is a slur on the Troops, and indeed on America itself:

saved American lives, and he went through a tough struggle to do it, but it was a job that had to be done. Look at the death toll that we had, protecting people in a different country because that's what America does.

We are willing to bet that the statistics on annual Iraqi deaths before 2003 and after 2003 just might not back up Mr. Payne's claim there, but that is indeed what America does. Then Payne gets rolling on the idea of America as the World's Policeman, and he lays down some pretty important history for us:

We've been the world's policeman, and guess what's happened over the time we've become the world's policeman? A billion people in other countries have moved into the middle class. We had India on TV earlier; if it wasn't for Americans dying around the world, the rest of the world would be in abject poverty. We have saved the planet, and if we go away as America's policeman [sic], it's gonna be hell to pay for everyone.

Anna Kooiman was so impressed that she had to slap the couch and thank him for that authentic patriotic gibberish. Payne was not able to say exactly what particular quality of American death tolls led inevitably to boosting foreigners into the middle class, but we have no doubt that it can be explained. Now, if those ungrateful bastards in India would just give us some credit for how we saved them from Saddam Hussein or maybe from Hitler and his henchmen who stole the Lost Ark. And then they showed a clip of Sarah Palin railing against Hollywood for not understanding why Americans so intensely love the Hollywood movie that she loves so much, the end.