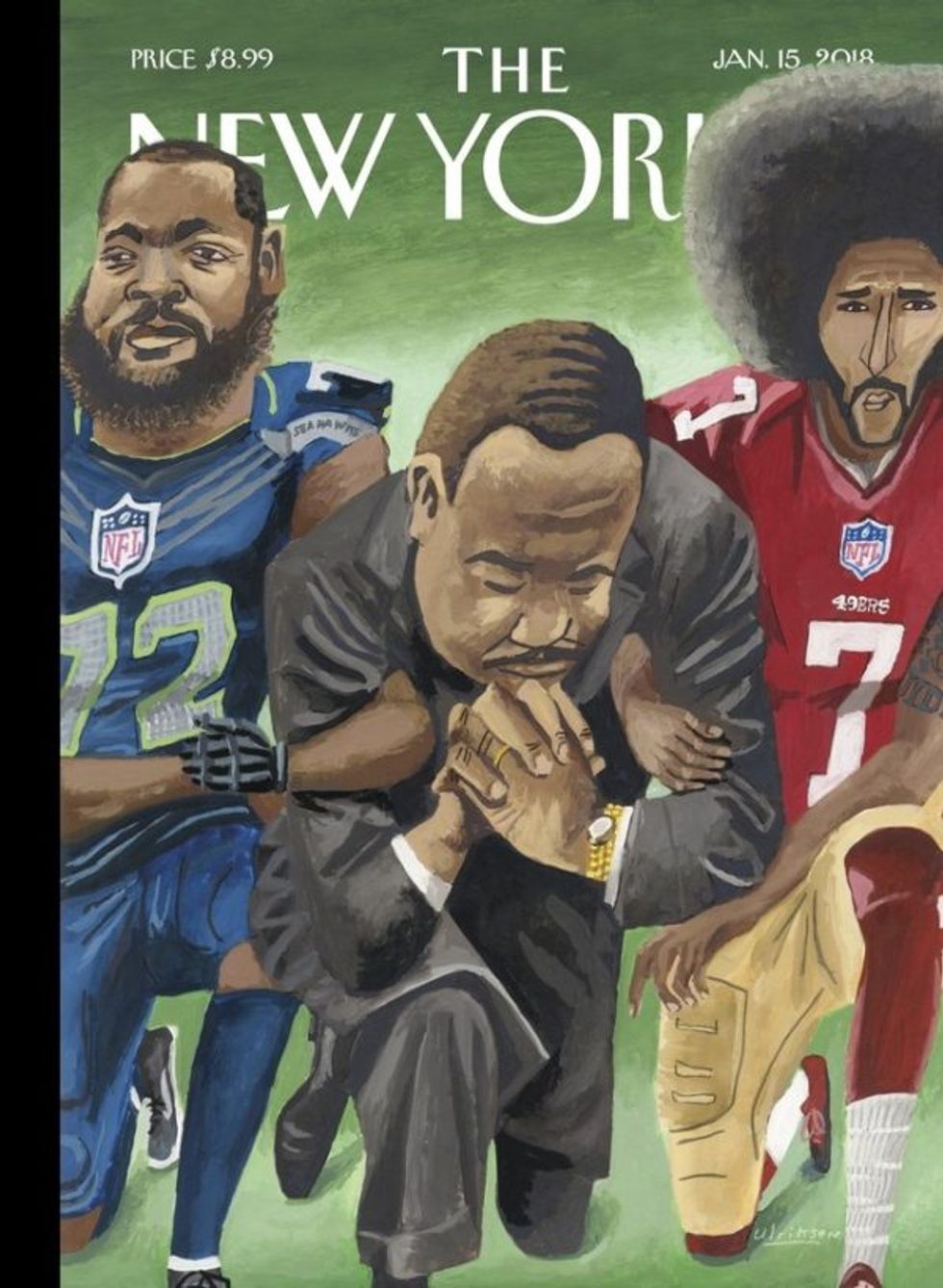 Martin Luther King didn't care much for protests, after all. He knew Jesus would fix stuff, eventually.

Fox News would like to wish you a happy Martin Luther King Day, but essayist Jeremy Hunt, a US Army officer and, according to his Twitter bio, a "Follower of Christ," sure is sad to see how The Liberals have politicized Martin Luther King Day. He's especially bothered by this week's New Yorker cover and by what artist Mark Ulriksen said about his cover painting, titled "In Creative Battle" (from a line in King's Nobel Prize acceptance speech about the "creative battle to end the long night of racial injustice"). Why do liberals insist on making King Day all political, he wonders?

Obviously, he must have been thinking of this sort of dishonest political use of Martin Luther King's image:

Mr. Hunt, who is African-American and a Trump supporter, is very sad to see Martin Luther King's legacy "twisted" to support messages that King himself would not necessarily agree with. In his Fox essay, he rips the "media’s need for political controversy," as embodied in that very divisive illustration:

The New Yorker magazine decided to use Dr. King to touch on the continuing raw nerve that is NFL’s national anthem protests, with its cover depicting Dr. King kneeling alongside Colin Kaepernick and Michael Bennett, two of the instrumental leaders in the controversy. The cover’s artist, Mark Ulriksen, says the inspiration for it came after he asked himself: “what would King be doing if her were around today?”

He goes on to say: “How would you feel if you had to show up at work every day and salute a country that treats black people like second-class citizens? I’m glad that Colin Kaepernick and Michael Bennett are making it political. I’m sure that if King were around today, he’d be disappointed at the slow pace of progress...”

For shame, New Yorker and Mark Ulrichsen, for shame! You see, it's just impossible to say what Martin Luther King would have thought about the radical idea of black lives mattering, or about police shootings of unarmed black men:

This day shouldn’t be about whether or not Dr. King would support the national anthem protests. Frankly, no one will ever know.

It is utterly impossible to even venture a guess. Mr. Hunt was quite insistent about this on his Twitter when the New Yorker previewed the cover last week:

Yup, never disparaged America, except for now and then, like in his not-as-popular-as-the-nice-Dream-speech "Why I Am Opposed to the War In Vietnam," which for some reason conservatives seem to forget King ever delivered:

Mr Hunt would much prefer we focus on the apolitical Martin Luther King, who brought America together through "his teachings on love, his commitment to ministering the Gospel, his dream of equality for all people."

And what did Martin Luther King teach us that Mr. Hunt thinks we should focus on? Certainly not politics. Instead, says Hunt,

[It] is precisely Dr. King’s teachings that we ought to embrace in order to combat the very forces of division the media seems determined to encourage and enflame.

In his famous book “From Strength to Love,” Dr. King wrote “only through an inner spiritual transformation do we gain the strength to fight vigorously the evils of the world in a humble and loving spirit.” As a Christian minister, Dr. King asked God to examine his own heart first. He believed that “darkness cannot drive out darkness; only light can do that. Hate cannot drive out hate, only love can do that” —and thus he knew that authentic inner change must first begin in himself.

See! It's about inner transformation through Jesus, and there's not even a mention of segregation in there, let alone economics (Hunt was very unhappy with a CNN opinion piece for suggesting King might somehow be against climate change or for socialism today). Get yourself some inner peace and love everyone, and for heaven's sake don't demonize those you disagree with. Fair enough -- King did argue for hate to be met with love, and Christian love at that. But it was also Christian love that sought political ends. King may have welcomed it if Bull Connor had realized Jesus wanted him to see black children as fully human, but more immediately, King wanted Connor to be prohibited from turning fire hoses and police dogs on those children, and to let their parents register to vote, regardless of the state of Connor's soul.

Hunt ends with a call for us all to be a lot nicer in our politics, so no one will be upset, because heaven knows King never wanted anyone to be upset:

Indeed, it will take an “inner spiritual transformation” to change the vicious nature of our political discourse -- just as Dr. King taught us over fifty years ago.

Regardless of the national anthem debate, we can all at least agree that when Dr. King knelt—he knelt in prayer.

Of course, King was praying for something decidedly political, as the King Center pointed out in September:

King and 250 others were arrested on Feb. 1, 1965, shortly after they knelt to pray in Selma, Alabama -- on charges of parading without a permit. They were at the Dallas County Courthouse to demand black voters be registered -- not to pray simply for its own sake. And at other demonstrations, those who knelt to pray got a billy club in the head, because why would God listen to prayers from troublemakers like them?

King's youngest daughter Bernice seems to have the crazy idea he'd be kneeling for civil rights today, even though she doesn't even work for the New Yorker:

Worth noting: a nice white lady replied, "dont compare king to flag and america haters...King bent the knee in prayer!!! NOT during national anthem!!!!" Wouldn't want some radical black lady disrespecting MLK like that.

King himself was actually attacked and beaten by a Nazi during a speech to the SCLC. He didn't fight back, and told the room not to hurt the assailant, but to pray for him. It should be noted, however, that this literal turning of the other cheek came at the end of four days of very political strategizing.

Also, we'll go waaay out on a limb and suggest Martin Luther King would know that nobody in the NFL is debating or protesting the National Anthem. He was prayerful and political, not a damned idiot.

UPDATE/Postscript: It's one of those days when we get in a hurry and forget stuff: Hunt's essay ends with a thought similar to what prompted King to write "Letter From a Birmingham Jail":

Let this day serve as a reminder that now -- more than ever -- we should follow his example and pray that someday America would lay aside bitterness and contempt and, instead, choose unity and understanding.

Seriously, Mr. Hunt? In the hope that you're merely not aware of what you just said, Martin Luther King was not big on just praying that people will be nicer. His prayer was always accompanied by action. And to suggest that the best response to police killings of unarmed black men is to just pray for a kinder America is, frankly, truly offensive on Martin Luther King Day.

Tell us your prayers in this, your OPEN THREAD.

Yr Wonkette is supported by reader donations. Please click here to help the cause.