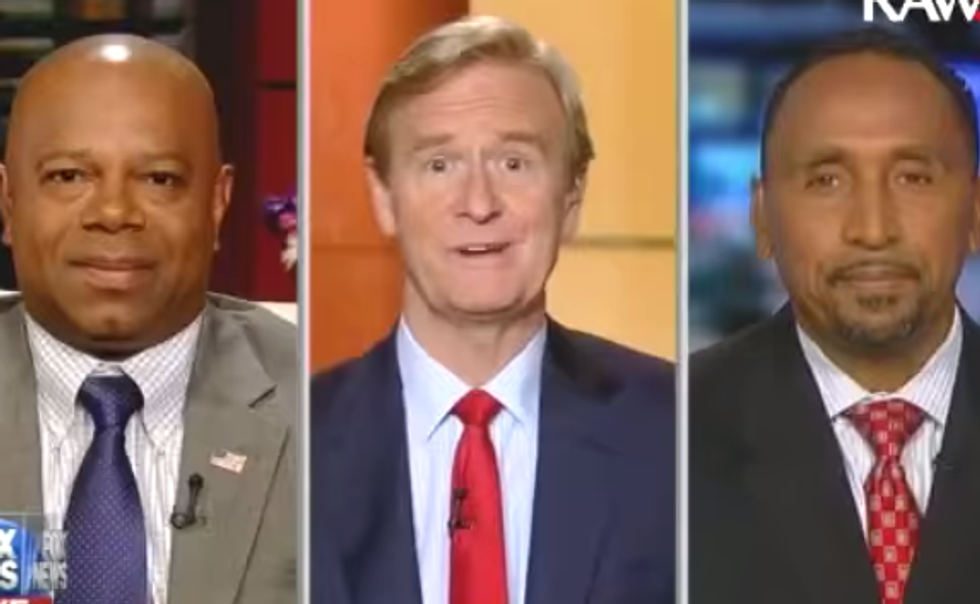 In the aftermath of the Charleston shootings, many people are grasping for answers and trying to have a discussion about enduring racism in the United States and what can be done about it. Wingnuts at Fox News are currently Doing Their Part, by whining about how it's NO FAIR that President Obama gets to say "nigger" and they don't, because that's not racial transcendence! Obama appeared on Marc Maron's "WTF" podcast, and attempted to have a grown-up conversation about the state of racism today:

Obama also talked about how mass shootings don't happen in other countries the way they do here and -- WAIT A MINUTE, "Fox & Friends" has a little problem with this! Why does Obama get to say the word when all the rest of us have to say "N-word"??? If he's saying it on the podcast, what's stopping him from saying it to America, at the State of The Union address?

Anchor Bret Baier tried to say a sane thing about it, explaining that Obama "has the prerogative, I guess, to say those things, when talking about racism, from his personal knowledge, and [he] has a unique perspective, as the first African-American president." No, Bret, that will not do. Here are the stupidest responses from the "Fox & Friends" adult daycare center, on the subject. To be fair, these hosts may be more used to hearing white people mischievously say it under their breaths at the country club, and not so used to hearing it out loud:

I think many people wondering [sic] if it's only there he would say it, and not perhaps in a State of the Union, or a more public address.

DAVID WEBB (a black Fox contributor who says things the white contributors like to hear):

I'm not shocked by Obama using the N-word. He's playing into this narrative because it supports what he needs to push and his agenda. He says that we basically have not evolved as a society, that racism is still institutional in the United States, and it's not, because we don't have codified law, we don't have social acceptance. As a matter of fact, we have overturned racism. There are always going to be racists. [...]

It's a big difference when the president uses it. Could you imagine if a Ted Cruz or somebody on the Republican side used it, in the same context, what the reaction would be ... The fact is that this president went below the dignity of the office, and I'd rather focus more on the issue, which is we've evolved as a society, but he's pushing this racist narrative, or this institutional racism narrative, for pure political gain, when we have evolved way beyond that as a society.

You hear that, white Fox News viewers? Institutional racism is OVER, therefore you don't need to worry your pretty little heads about it.

The question is, if you feel it's okay for the President of the United States to make this kind of comment, is it okay for him to stand in the briefing room of the White House to do it? In front of a joint session of Congress, State of the Union? Should he use that word there if he wants to talk about racism?

You would think the president of the United States had gone on television and started hurling racial slurs AT people. Of course, this is a very hard subject for many white people of the conservative variety, because they really, really, really think they're being denied something by not being allowed to say "nigger." And since THEY don't get to say it, well then Black President has just sullied the entire office of the presidency, by saying it, in a discussion about racism.

So there you have it. Racism is over, except for the president, who is the Real Racist, according to the Civil Rights experts who work for Fox News.