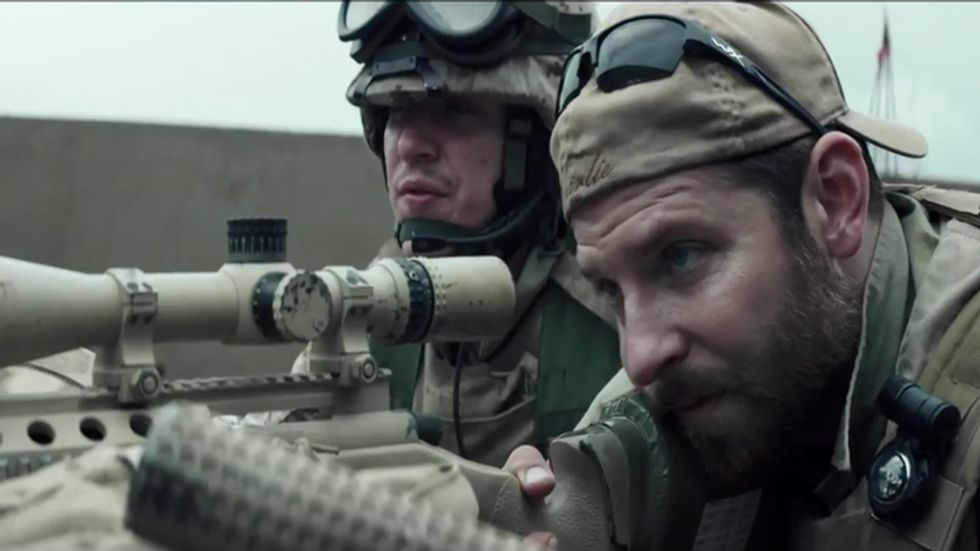 Here's a true story about Todd Starnes. Recently, I was at a party and mentioned that I was writing about Todd Starnes. The person I was talking to didn't quite know who Todd Starnes was until I said, "People make jokes about him drinking pee on Twitter. Pee jokes guy. Big hat." Then she was like "ohh, that guy! Yeah. That's the only reason I know who he is. The pee jokes." So good work everyone, I guess.

In any case, Todd Starnes talked about American Sniper, firing back (yes, ha ha ha) at Michael Moore, who tweeted this a few days ago:

I'm not entirely sure why Michael Moore is pretending to care about Christian theology, or why he thinks the obviously true statement that Jesus wouldn't have been a sniper is a devastating rhetorical turn. Jesus also wouldn't have been a NASCAR driver, a documentary filmmaker, a gynecologist, or a Wonkette writer. Also who cares? In any case, Todd Starnes took this opportunity to traffic in typical racist and anti-Muslim garbage meant to titillate his listeners' blood lust and tickle them with the mental images of the imagined liberals looking dutifully shocked at this unabashed racism and Islamophobia:

“I’m no theologian,” Starnes opined. “But I suspect Jesus would tell that God-fearing, red-blooded American sniper, ‘Well done, thou good and faithful servant for dispatching another Godless jihadist to the lake of fire.’”

Not sure we agree with you a hundred percent on your theology work there, Lou.

Based on the autobiography of Chris Kyle, the Iraq War-era Navy SEAL who (says he) became the deadliest sniper in American history, American Sniper is the story of a man hollowed out and used up, a human being emptying himself of humanity to fill himself with violence. He returns to Iraq over and over to kill and watch his friends be killed, unsuccessfully attempting to cope with death by dealing more of it. But it is not in Iraq but during the scenes of his stateside leave that we are able to clearly see the toll the war has taken on him. In Iraq, he is allowed to be the weapon that he has become, but at home he is supposed to be an actual human being, a task for which he becomes increasingly and fundamentally unsuited. It is to the illustration of this toll that Eastwood refers when he calls his movie anti-war.

But the 15 minutes of the film that follow Kyle's final return home fundamentally undermine the careful and subtle work that the film does in showing how even soldiers who survive can be casualties of war. American Sniper gives short shrift to the deep trauma Kyle suffered, quickly reassembling his broken soul and offering glib solutions to his purposelessness. It transforms Kyle from a cautionary example into a figure who can be Properly Martyred, an event relegated to a vague one-sentence epilogue before cutting to the credits, which run over documentary footage from the real Chris Kyle's funeral procession. This is one problem with the film. Some critics have identified a second problem: whenever American Sniper deviates from the autobiography upon which it is based, it tends to flatter the real Chris Kyle. For instance, the film injects him with a thoughtfulness and ambivalence about the people he killed that is absent from the book, and depicts him as humble and honest about his legacy when he quickly became an exaggerator and serial liar upon returning home. We here at Wonkette think that posing the film's lack of fidelity to the historical record as its primary problem is a mistake. If American Sniper presented itself as wholly fiction instead of a true story, or if it presented Kyle as a cold-blooded killer and ended immediately upon his return home, it would still be deeply flawed.

American Sniper is not interested in humanizing any of the Iraqis, presenting them only as a series of faceless and interchangeable threats to be evaluated and disposed of. In the world Eastwood constructs, the most charitable description an Iraqi person can hope to merit is "helpless," and even they are viewed in the way one views an animal when its foot is stuck in a trap: blindly desperate, less than human, and at most to be pitied, not empathized with.

Todd Starnes is a clown, but lots of people manage to convince themselves that being racist and anti-Muslim is interesting, brave, and iconoclastic in a culture which is already racist and anti-Muslim. Our culture already treats Muslims and anyone who "looks like they could be a Muslim" as something less than human, their lives as expendable, their deaths as only worth counting as entries into a ledger for bragging rights. Any story, to some extent, flattens out the characters furthest from its center. One story cannot tell all truths, and every story doesn't have to have be a morality tale. But the problem with American Sniper is that it's not just one story, but that it is yet another story. It is yet another story in which the closest a brown person can get to innocent is "suspect," yet another story that dehumanizes those whose humanity is already denied, yet another story which transforms brown people into bodies, whether they live or die. Even if the movie had powerfully depicted the effects of war on an American soldier and their family, it's hard to see how such a film could constitute a strong anti-war statement at all. In the sociopolitical environment in which we live now, such films can make us feel gratitude and pity for the soldiers we've sent. They don't make us rethink our wars, they make us want to order more drones.

As to Starnes, we're just lowly Wonks, not Starnesologists, but we suspect that he is drunk on his own pee and perhaps needs to look into some kind of 12-step program. For people addicted to their own pee.