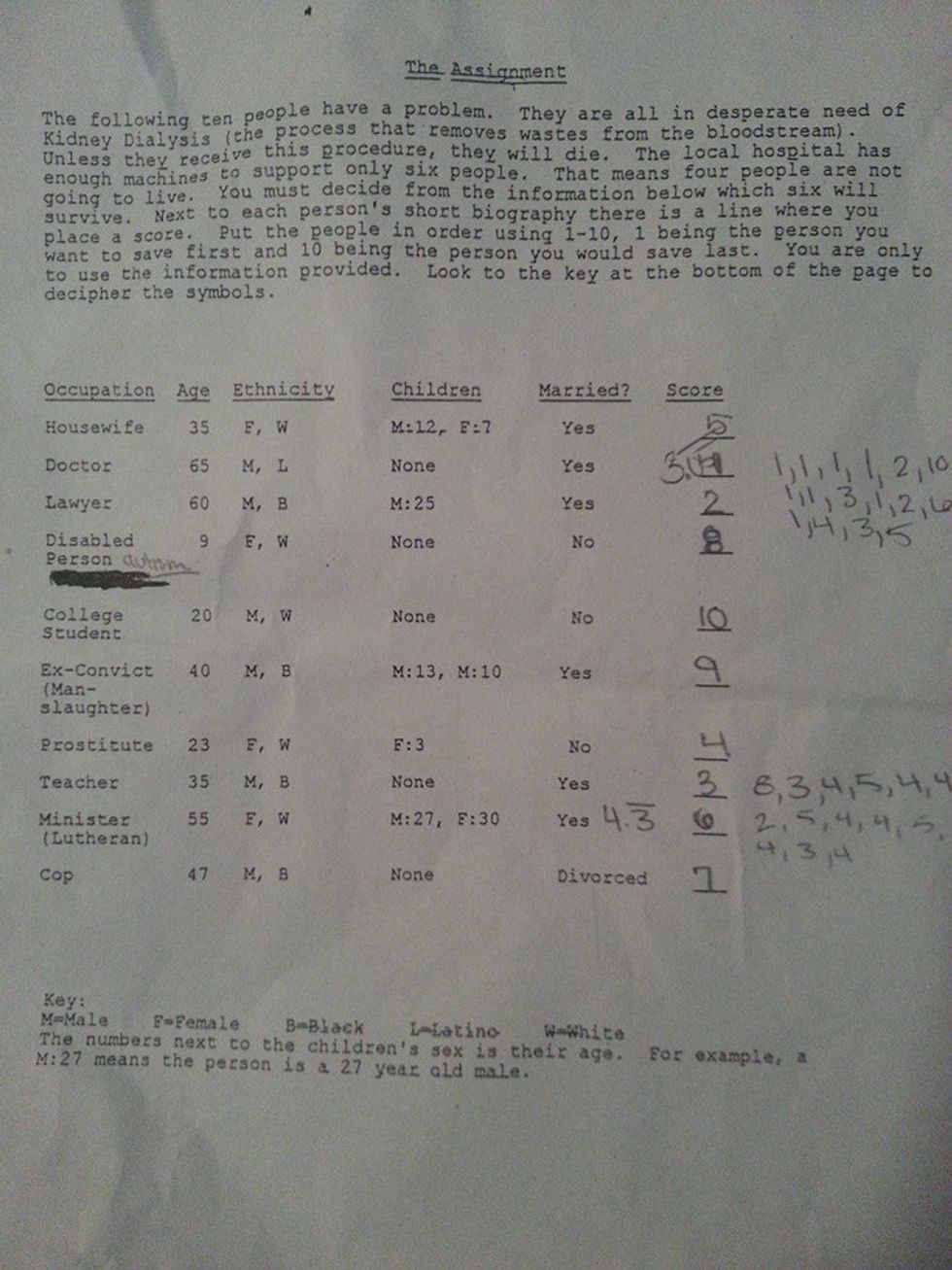 Fox News Radio's bipedal panic robot Todd Starnes has discovered yet another element of Obamacare's insidious plot to kill grandma: A sociology class at St. Joseph-Ogden High School in St. Joseph, Illinois, that was given an assignment to decide which of ten fictional characters would receive life-saving medical treatment:

The lesson involves 10 people who are in desperate need of kidney dialysis.

“Unless they receive this procedure, they will die,” the lesson states.

But there’s a problem. The local hospital only has enough machines to support six patients.

“That means four people are not going to live,” the assignment states. “You must decide from the information below which six will survive.”

Starnes is pretty sure that's a lesson in death panels right there, even though exercises in ethical dilemmas like this have been around forever -- we remember rightwing Christians complaining about them in the 1980s as part of the threat of "secular humanism." But this one mentions scarce medical resources, so of course it has to be part of a plan to get kids ready for the ugly new realities of Obama's America.

According to the worksheet I received, the student opted to spare the doctor, lawyer, housewife, teacher, cop and Lutheran minister.

The others weren’t so lucky.

Among those unceremoniously dispatched to the hereafter were an ex-convict, a prostitute, college student and a disabled person.

“The first thing I thought was they were desensitizing kids to death panels,” he told me. “They are preparing them for it.”

Jarratt also had a sneaking suspicion that the assignment was part of the Common Core standards, because duh, communism.

The school's principal, Brian Brooks, refused to admit any involvement in an evil scheme:

He said the purpose of the lesson was to teach students about social values and how people in our society unfortunately create biases based off of professions, race and gender.

“The teacher’s goal is to educate students on the fact that these social value biases exist, and that hopefully students will see things from a different perspective after the activity is completed,” he said.

That’s all well and good if you were the doctor -- but try telling that to the 9-year-old disabled kid.

It's going to be really difficult to explain anything to a fictional 9-year-old who exists only in a worksheet, but it's great to see that Todd Starnes cares so much about nonexistent people. Cut food stamps for real children, but no fictional ones must ever be harmed.

Starnes is not moved by the principal's lame excuse:

No matter what how the school tries to explain it, a group of young kids was deciding who got to live and who got a death sentence.

And needless to say, Sarah Palin is trumpeting Starnes' column as proof that she was right all along, because as we all know, there's a pretty seamless connection between thought exercises in Illinois high schools and national health policy:

Consider this school teacher's assignment which mandates that kids undertake the task of deciding the fate of characters in an exercise that can obviously be considered a numbing lesson in “death panels.” Unbelievable ...

We should hope that influential adults could teach the next generation that it is never ethical, it is never right, for our government to take steps towards the destruction of the sanctity of innocent life. And the way to do that is for our culture to condemn and reject the insensitive callus that grows in a society by this kind of thinking. The teacher could hopefully explain how Orwellian and wrong this thinking is. And she'd go on to declare our right to LIFE, liberty, and the pursuit if happiness, upon which American exceptionalism was built. I challenge her to do so.

Precisely. The teacher should emphasize American values, which would involve telling the class which of the fictional people has insurance or can afford treatment, and then the class could vaguely hope that a charity would provide help for anyone who doesn't.  Next, the kids could all roleplay being an HMO call center finding pre-existing conditions that could deny payment for any of the characters who did get treatment. And maybe they could wrap up by pretending to be the audience at a Republican primary debate, yelling "let them die!"