Fox News Shitmouth Has Thoughts About John McCain, To Shit Out His Mouth 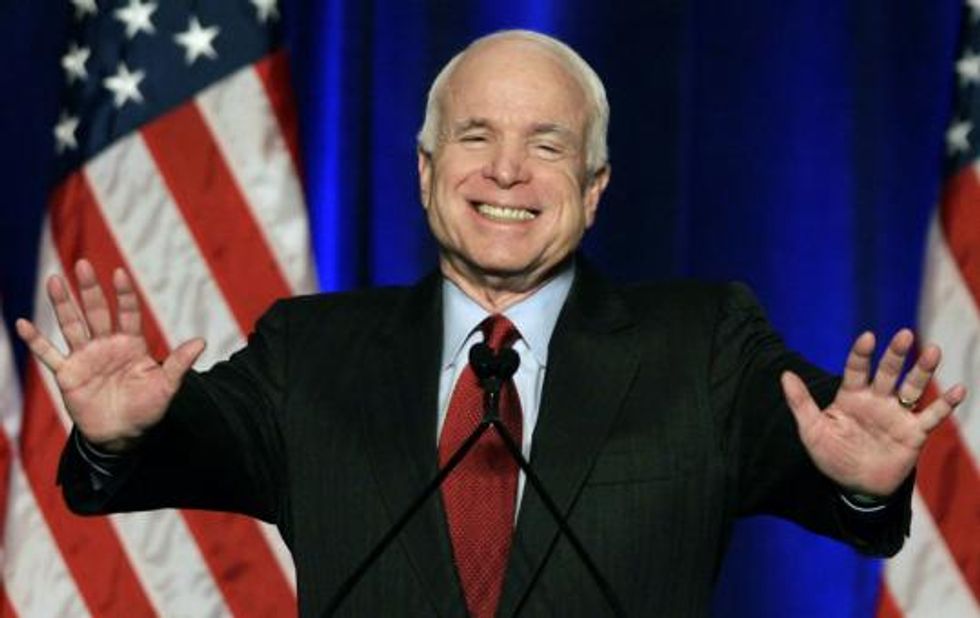 OH JOHN MCCAIN, YOU'VE GONE AND HURT FOX NEWS'S FRAGILE FEELINGS AGAIN! McCain, who is at home fighting brain cancer, took time out of fighting brain cancer in order to state unequivocally and for the record that, after Gina Haspel refused to say she thought torture is immoral, she is not qualified to run the CIA. You know how John McCain is about little things like torture and being a POW for FIVE AND A HALF YEARS, ALAN.

Fox News could not let this insult to Donald "Bone Spurs" Trump stand! He prefers people who never got captured in the first place! Also, Trump believes torture works, because he is an incredibly stupid man who probably saw some shitmouth on Fox News claim without evidence that it works. (It does not work.)

The fact is, is John McCain—it worked on John. That’s why they call him ‘Songbird John.’

DO THEY? Is that really how it is, Mister Big Man? No they do not, and no it isn't. Because according to the actual record, which is PRETTY FAMOUS if you aren't an old senile shitmouth, John McCain gave his Vietnamese captors the names of the Green Bay Packers offensive line, and said they were the guys in his squadron. There's no other evidence McCain spilled intel to his captors besides that incident, either. So if "they" call him Songbird John, that is very inaccurate. It should be Songbird John, FULL O' LIES.

That's not all he said, though. Crooks & Liars transcribed what came out of his shitmouth just before:

"If we have some terrorist and the possibility of five nuclear weapons going off in U.S. cities, i want to use any method that will determine where they are, when it's going to happen and how we can nullify them."

LOL, is this shitmouth speaking from his own military experience? Sounds more to us like a grunting old dick who passed his sell-by date sometime during the Clinton administration and whose kids played a joke on him and told him "24" was a documentary. But maybe that's just us.

Now, as Media Matters notes, the Fox host, Charles Payne, says he is very sorry Lieutenant Shitmouth up there opened his shitmouth, and Fox News was quick to say dude does not earn a paycheck from them to be a contributor. Regardless, we won't be surprised if this ends up in a presidential Twitter proclamation by morning.

As the Daily Beast reminds us, Lieutenant Shitmouth is a birther who thinks war with North Korea would be NBD because most of the millions of people who die will be North Koreans. He also thinks -- or at least thought at one point -- that the only reason we never found WMD in Iraq is because they hid them in Syria and other places in Not Syria, like Russia and China and France. Clearly, we are not dealing with America's Best People here.

But it's sad and stupid and fucking ridiculous that we are again litigating whether or not torture even works, as if 2003 and 2004 didn't suck hard enough the first time. But here we are! Snarling rage pube Dick Cheney has emerged from his hellmouth to regurgitate the blood of innocents about how torture is awesome, and Fox News is VERY SORRY IT HAD TO DO THIS, but it has now successfully mama bird-ed this shit into the president's gaping and gullible maw hole, so he can put it on the Tweeter next time he's feeling cranky.

God bless us, everyone. And now it is your Open Thread!