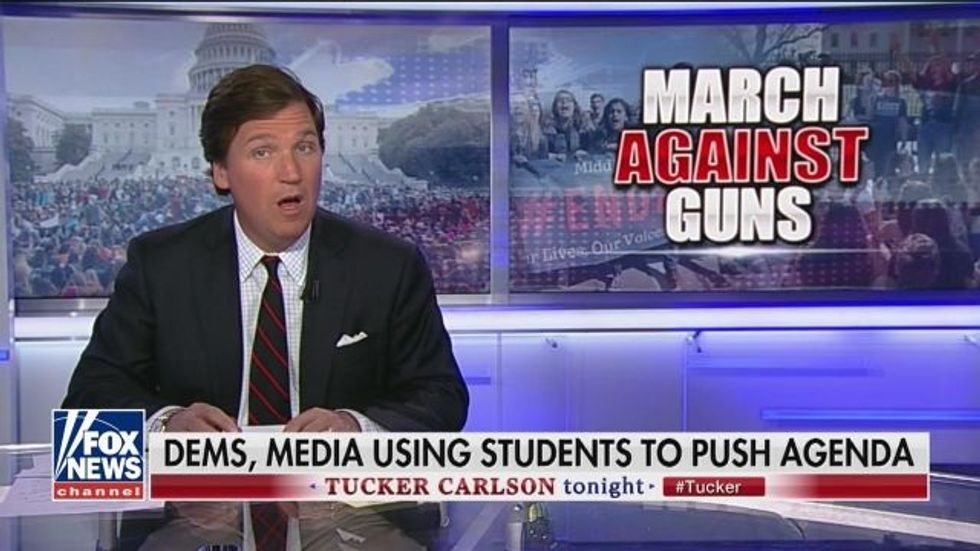 The boy just can't help lookin' like a dipshit, what with being a dipshit and all.

Fox News has a habit of substituting its own reality for what's going on in the rest of the world's news cycle -- for example, their alternative programming to Sunday's Stormy Daniels interview on 60 Minutes was Tucker Carlson's confused face asking whether the government is covering up UFO sightings. But despite lots of people claiming Fox News didn't cover Saturday's March for Our Lives, the network really did cover it. Albeit far less than other networks, and really, really badly.

The real red meat of Fox's coverage focused on what terrible people those kids are for trying to take away everyone's guns. Oh sure, the website for the march and the march organizers said the march was about a much more limited agenda -- banning the sale of assault rifles and high-capacity magazines, plus closing loopholes in background checks and raising the minimum age for purchasing rifles. But Fox News knows all about reframing, so its hosts and guests instead said the march was about ending the holy Second Amendment, banning all guns, and of course trashing the very Constitution itself, just like no one onstage at the march called for. Oh, and maybe forcing America to join "the new world order" -- somehow they stopped short of fretting about Chinese troops swarming out of the tunnels under WalMarts.

Tucker Carlson certainly had a busy weekend. Friday, on the eve of the march, he explained the march's entire purpose was to "demand that you be punished for crimes that others committed":

He went on to explain that the kids who organized the march were mere puppets of the wealthy elites who were REALLY running the show. Also, since the march organizers hadn't invited any pro-gun kids to take the stage, they were clearly not interested in democracy, not at all:

If you honestly don't care what the people who disagree with you think, if you believe they want to "murder more children," who are you? Well, you're angry. You're definitely not fit to be making policy for the rest of us. You are by definition an extremist. You should not have power if you really believe anyone who disagrees with you is evil and wants to kill the innocent.

The "Fox and Friends" Sunday show was really full of shock and horror at the kids' evil plan to take away everyone's guns. The kids were clearly passionate but clueless, and were obviously mere dupes of larger, more shadowy forces. Brian Kilmeade explained it just "goes against logic" that the kids don't want armed teachers there to protect them, because heaven knows, he'd want somebody "shooting back for me." Pete Hegseth -- maybe your next VA administrator, whee! -- explained he had very little use for Martin Luther King's granddaughter giving him a lecture on guns, because what does she even know about what one motivated Marine and his rifle can accomplish?

Spare me if I don't want to hear the sanctimoniousness of a 17-year-old. Listen, I get their point. They have a right to that point. It doesn't make them an expert on the Second Amendment at all. The Second Amendment is not just for hunters, it's not just for self defense. It's for free people to defend themselves and a check on the tyrannical government. These 17-year-olds should go back to civics class in my opinion. Good for you. You can protest. You've got your rights [...]

By Monday, Carlson was back, explaining that all those stupid screaming children aren't good for America, or for journamalism. No, not the ones screaming while their school was being shot up, the shrill little America-haters at the march. Enjoy his perfectly fair characterization of the march:

This is the problem with letting children write news stories. The articles tend to be dumb, and intentionally or not, they tend to be inaccurate and dishonest. Worst of all, they tend to reinforce the fantasy that complex problems have simple solutions, because that's what most children believe. In real life, nothing is simple.

We don't really know why the incidents of school shootings has risen, even as the proportion of households with firearms has dropped. We ought to do our best to find out.

The self-righteous kids screaming at you on television over the weekend aren't helping at all.

For a bit of contrast, Media Matters put together a nice little comparison of how Fox covered these terrible kids who want to trash the Constitution, versus their coverage of the poor oppressed white kids with legitimate grievances against political correctness who marched with torches in Charlottesville last summer (one of whom murdered a counter-protester, though why get into boring details):

Why aren't people more understanding of Nazis and more critical of shooting survivors, huh? If only the teens at the March for Our Lives had chanted "JEWS! WILL NOT! REPLACE US!" or "BLOOD AND SOIL!" they might have gotten kinder treatment on Fox.

Yr Wonkette sole source of funding is reader donations. Please click here to help us up our antidepressant dose.