Fox: When Will Barack Obama Stop 'Slut-Shaming' These Poor CEOs? 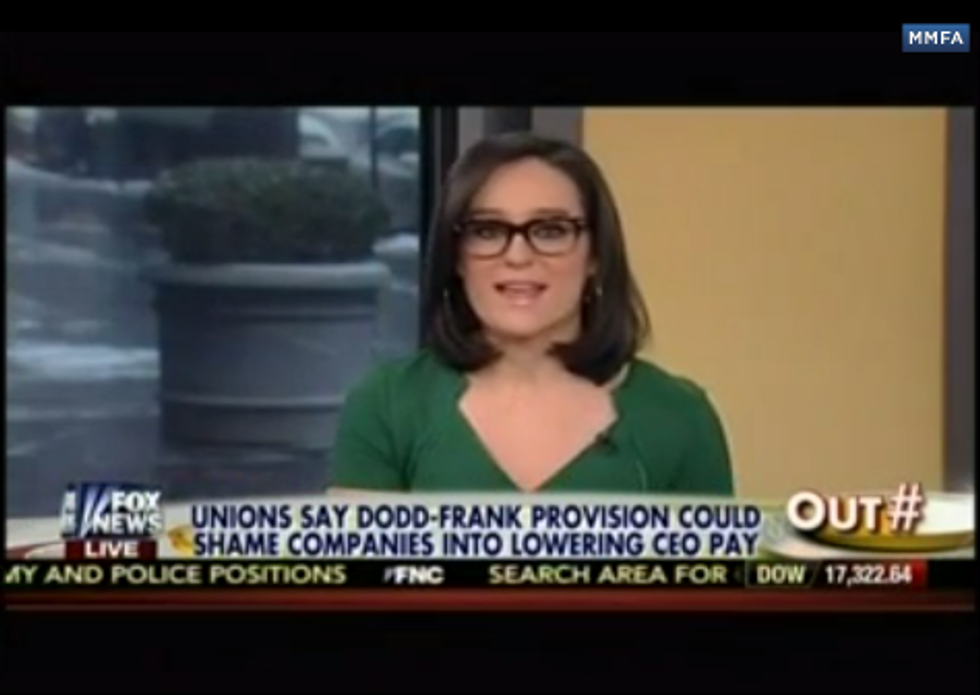 Do you know what kills freedom? Besides President Obama and Democrat Party and increased access to healthcare, obviously? Forcing bazillionaire CEOs to tell us just how many bazillions of dollars they make. No, really, it's true! The bobbledheads on Fox's Outnumbered said so, and they report so you can decide they must be right.

Here's Kennedy -- yeah, that chick who used to tell us what hair metal band video was coming up next on MTV -- econosplaining at us how a provision under consideration by the Securities and Exchange Commission, known as the pay ratio rule, would murder business. You know, more:

[It] would force publicly traded companies to disclose how many times more their CEOs earn compared to their basic employees. It’s just one of the regulations in the Dodd-Frank law that’s expected to be finalized this year. Labor unions and liberal advocacy groups backing the provision. They say it will shame companies into lowering CEO pay, but critics say the regulation would just force companies to compile complex data to determine the median salary of all their employees, which could cost them millions. It's already cost them millions of dolalrs!

No, we don't know what "basic employees" are either. The ones who don't get to private-jet to the office every day, we guess, and don't have keys to the executive washrooms?

We don't really need further explanation of just how unfair it would be to force companies to tell The American People just how much executives are squirreling away in their Cayman Island bank accounts, do we? Oh, what the hell. Tell us more, Totally Serious Journalist Kennedy.

Does that mean the "highest workers" are a bunch of whores? Yes, according to co-host Andrea Tantaros, that's exactly what it means. But not the way you think:

Slut shaming companies is not the job of the U.S. government at all. And that info already exists out there, by the way, Kennedy. They could pull up a lot of these reports, and there's plenty of people who work in the federal government who are sitting around picking their nose today at their computer who could do this on their own. That's not a good use of taxpayer dollars.

We had no idea our taxpayer dollars were paying for nose-picking, when they could be compiling this data their own selves, instead of making oppressed business executives send memos to their accounting departments to do it, and now we are outraged too! But that's not even the worst of it.

Also, Kennedy, the only people that should care about this are the shareholders. How much people make at the company. Otherwise, frankly, it's none of the government's business. But if they do want to do this, I think it would be helpful to tell us the difference between benefits that you get when you work for the government and a private company, or how easy it is to get fired at a private company, versus how hard it is to get fired at a government.

Sure, that makes perfect sense because we all know how those public sector CEOs are making all kinds of untold millions -- and all while picking their noses at their computers, no less! And you can't even fire them for any no-good-reason, like being a lady or a gay or a pregnant type person. Unfair!

Yes, the former VJ agrees, that would be "much more useful" somehow because reasons, ha ha, take that, public sector sluts! California is already considering similar legislation, which, she says, "is a handwritten invitation for corporations to leave that state." Probably on tofu-scented stationery too!

The show's Daily Token Dude Bo Dietl, outnumbered by all those ladies, agrees that yes, it is bad and wrong to make those rich whores confess just how rich they are and just how rich their "basic employees" are not.

Sorry, we don't have our nonsense-to-English dictionary handy, so we can't tell you exactly what that means, but we think it loosely translates to, "Screw you, workers, you're not up at 2:30 in the morning, so shut up already." We think.

The entire panel agrees with itself that forcing CEOs to disclose these numbers means corporations will not be able to find any good CEOs anymore, because it totally won't be worth those big fat checks if they have to admit how fat those checks really are.

"So the government should stay the heck out of corporations," Token Dude says. Yeah! And harumph! Now please explain how less regulation would create more wealth in this country ... somehow. How's 'bout you take this one, Kennedy?

Oh. Well, that settles that then. Plus, we all know this is a slippery slope to the government telling corporations how they should pay their workers, and then, hell, it's Marxist apocalypse o'clock, damnit.

"They're going to have a BMI for all corporations," Kennedy says, "not just publicly traded ones, and that, once again, kills freedom, and that is not ok."

Any questions? Besides, "What does Body Mass Index have to do with any of this?" Nah. That should explain it all for you. No large sodas for corporations, because fascism. And if you do have any questions, well, you're obviously just killing freedom. Probably while picking your nose. And that is not OK either.