Fox's Keith Ablow: Obama's Doing Ebola To America Because Of His African Affinities 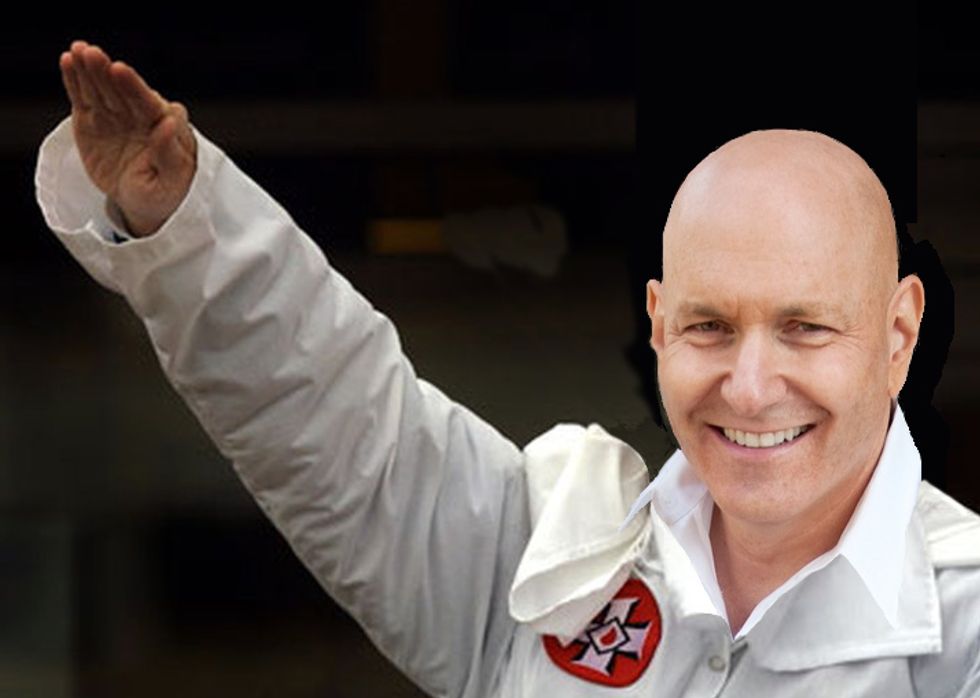 Worst Psychiatrist Ever Dr. Keith Ablow of the Fox Network's "Medical A-Team" -- they were accused of medical expertise they didn't have, we guess -- explained Tuesday why Barack Negro Blackity-Blackfella Obama is allowing Ebola to run rampant in the United States, if by "rampant" you mean one patient who's died and two nurses infected because their hospital was to containment what Fox is to reporting. Can you guess why Obama is letting -- nay, inviting -- the Ebola virus right into our homes? Could it possibly be because he is Not Truly American? Why, yes, yes it could!

On Fox News radio's The John Gibson Show, Ablow revealed, using all the finely honed psychiatric skills of a walking foreskin who purports to be able to diagnose people he's seen on television, that he had peered “deep inside the president’s psyche” and discovered the true reason that Barack Obama hasn't instituted a ban on travel from African countries with Ebola outbreaks. It's not because public health experts have advised the president that travel bans don't work. There's nothing psychological about that, for heaven's sake! No, the real reason is that Barack Obama is offended by the very notion of borders, and sees himself as a "citizen and leader of the world," primarily not as an American. Indeed, said Ablow, Obama doesn't much like the nation that elected him twice. "He has it in for us, as disappointing people, people who have been a scourge on the face of the earth."

You remember that big "Americans are colonialist nasties and we hates them. Hates them!" speech Obama gave at the United Nations, right? Keith Ablow is very sure he heard Barack Obama say that. So obviously, he's not going to seal the borders like any good patriot would. Ablow happens to know that Obama doesn't want to protect Americans, because after all, America has "visited a plague of colonialism" on the world, and so it's only fair that we open ourselves to dread disease. Ablow knows this because of psychology: Michelle wasn't proud of America, and Obama went on an apology tour, so this all just makes sense. "How can you protect a country you don't like? Why would you?"

“His affinity, his affiliations are with them! Not us! That’s what people seem unwilling to accept. He’s their leader. We don’t have a president.”

“We don’t have a president?” Gibson asked.

“We don’t have a president who has the American people as his primary interest, who believes the country has Manifest Destiny and has been a force for good,” Ablow insisted.

Ablow also had little hope that Obama could ever be persuaded to like America enough to protect it, because that's just how sick a human being that man is. He also explained how Obama became president because after the trauma of 9/11, the American People got a bad case of "national Stockholm Syndrome" and started identifying with the terrorists who attacked America, so we elected Barack Obama, someone they thought terrorists would like, to say to the terrorists,

"Look at this guy. We're gonna elect this guy president. Why would you attack us? We're not even voting for someone who likes us! This guy, who has names very similar to two of our archenemies, Osama, well, Obama. And Hussein, Hussein. Surely you won't attack us now, because we've got a shield here, of a guy who, as the leader of our country, says we're bad, so leave us alone."

Keith Ablow is some kind of genius! We remember thinking EXACTLY THAT when we voted for Barack Obama.

Or maybe there's another explanation for Ablow's comments. If we may do a bit of informed analysis of Dr. Ablow, based on having seen him on Fox quite a few times, we can understand his tortured psyche: Trapped among a group of sociopaths at Fox News, Keith Ablow finds himself compelled to say more and more ridiculous things about Barack Obama in the hope that someone in the medical field will see just how completely unhinged he has become and will rescue him. This may not actually be rightwing "news analysis;" it may in fact be a cry for help from a deeply tormented soul who cannot find a way to live with himself and the mockery he has made of his profession.

Or he could just be a racist asshole. That's a pretty good bet, too.