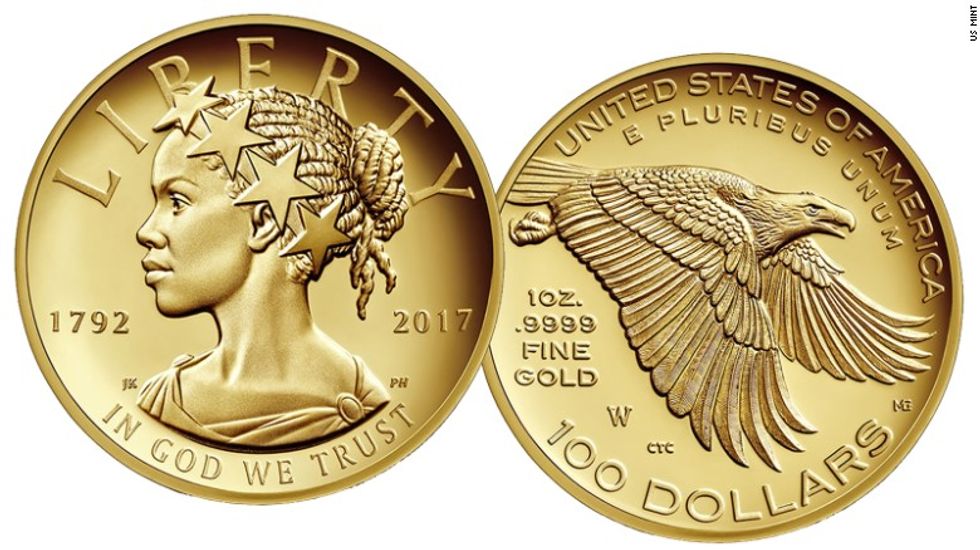 That image is very disturbing. I wish you'd have chosen something else. I realize that it's a shameful part of American history that we should never forget, but it's too much.

Earlier today, the U.S. Mint announced that, for the first time, a woman of color would be depicted as Lady Liberty on a piece of currency -- a $100 coin. While it doesn't do much to take the sting out of having Donald Trump as president, it's still a really pretty coin, even if you probably cannot spend it anywhere.

Of course, as we all know, there are a lot of racist white people out there who are incredibly sensitive about fictional characters they believe are white being portrayed as people of color. You may recall the time Megyn Kelly felt the need to assure all the children that Santa Claus was white.

Oh yeah, can't wait for her to join NBC! What a catch!

You may also recall the time internet racists lost it over Hermione Granger being played by a black actress in the London stage production of "Harry Potter and the Cursed Child," and then got even more mad when J.K. Rowling said she never specified what Hermione's race was. Or the time they got mad because they found out the character Rue in Hunger Games was black all along.

Keeping with tradition, many internet racists are now deeply upset by the portrayal of "Lady Liberty" as a black woman on a coin. Like this lady who didn't understand how Lady Liberty could be black when she was a gift from the French and therefore WHITE. You know, because there are not any black French people?

The original female personification of America, by the way, was Columbia, who -- though generally portrayed as white, because racism -- was depicted differently all the time, depending on the artist drawing her. I'm not sure why we can't do the same for "Lady Liberty."

Naturally, lots of them thought that this was somehow part of some kind of plot by the Obama administration, despite the fact that the President has nothing to do with who appears on a freaking coin. You'd think these patriots would know that, but ALAS!

In fact, one of them even wrote a whole entire article for conservative website "Freedom Daily" on the subject.

I really like how the title makes it seem like he waltzed over to Ellis Island, reached up under the Statue of Liberty's stone skirt and grabbed her by the pussy. But that seems a little bit more like our new president than our current one, no?

And re-writing our history is exactly what Obama’s doing. In a brazen final move to change our history, Obama is taking one of America’s most cherished and honored national symbols, with Lady Liberty getting a whole new makeover where she will now be inaccurately portrayed as an African American woman. [...]

Seriously Obama? Just because you hate white Americans does not mean that you can just rewrite history by changing one of our most iconic symbols so it represents the race of people you continually place over everyone else. What’s next? Are we going to change the quarters so George Washington’s image is of a black man?

Once again, the president doesn't decide who or what is on coins. If that were the case, Reagan probably would have made one featuring jelly beans. Also, the difference between "Lady Liberty" and George Washington is that George Washington was a real person. Though frankly, I would be cool with replacing him on the quarter with Dinah Washington, given the choice.

Another genius over on the Alt-Right subreddit felt that it was a personal assault on white people, because if they start letting non-white people on currency, they're all "fucked." Somehow. I don't know.

Imagine how sad your life has to be to fall into the throes of agony because there are people on coins you're probably never going to use in your life that are not the same race as you! Or upon seeing a fictional character you thought was white being portrayed as a non-white person?

I mean, these people are always talking about how people on the left are all "crybabies" and "snowflakes" and what have you -- but can you even imagine what they would do if they had to deal with 1/10th of what people who are actually oppressed go through? If they're traumatized by a damn $100 coin that's only going to be bought by collectors? They would fall down dead in a half hour, max.