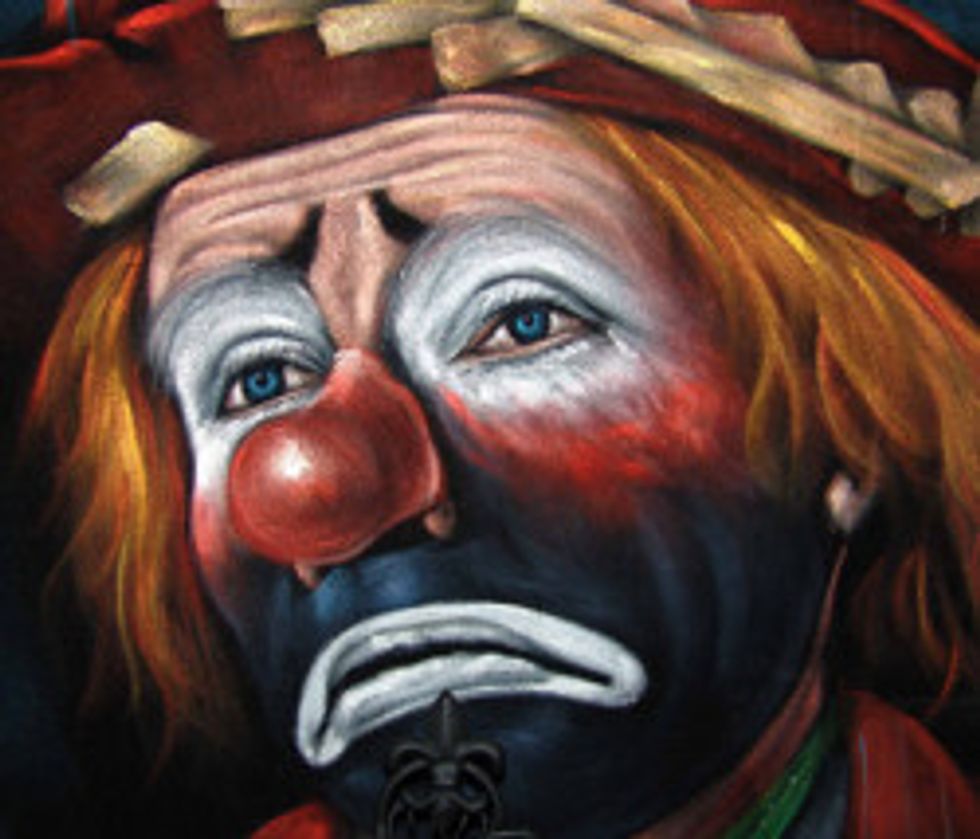 What a sad time it is to be wingnut muppet Frank Luntz. It seems that all these years of soaking in the corrosive environment of national politics have left the communications genius adrift in an existential midlife crisis. While most of us would deal with such a crisis by crying to our therapists or getting a tattoo, Frank’s solution is tospill his guts to Molly Ball over at The Atlantic. Gotta admit, it’s brave of Frank to put the pathetic details of his life online where people can feel sorry for him wonder if he knows that “karma” is not an Indian restaurant in Dupont Circle.

How sad is Ball’s story? SO SAD YOU GUYS. Does it make us feel anything resembling empathy for Frank Luntz? Maybe it would if it did not include passages like this:

It was what Luntz heard from the American people that scared him. They were contentious and argumentative. They didn't listen to each other as they once had. They weren't interested in hearing other points of view.

Hmmm, what could ever have led us to such a pass? One person with a possible answer is noted historian Frank Luntz, who last April laid the blame on conservative media figures. As we mentioned at the time, 2013 Frank Luntz did not place any of the blame on 1994 Frank Luntz, who had helped Newt Gingrich encourage Republicans in Congress to refer to their Democratic counterparts using words like “sick,” “corrupt” and “traitors.” Self-reflection did not appear to be one of 2013 Frank Luntz’s talents.

Luntz knew that he, a maker of political messages and attacks and advertisements, had helped create this negativity, and it haunted him.

Wow, could we be headed for a Lee Atwater-style mea culpa, only over a chicken pot pie at the Capitol Hill Club instead of on his deathbed?

But it was Obama he principally blamed. The people in his focus groups, he perceived, had absorbed the president's message of class divisions, haves and have-nots, of redistribution... Luntz now believed the people had been corrupted and were beyond saving. Obama had ruined the electorate, set them at each other's throats, and there was no way to turn back.

Sure, it was Obama pointing it out, and not floods of news stories about how CEO pay has shot up into the stratosphere while middle-class pay has stagnated, or the wealthy bankers causing the 2008 economic crisis with their “exotic financial instruments,” or Republican politicians taking every opportunity to blame poor people for being poor. We could go on and on here, but Frank Luntz is too thick-headed to listen.

He has changed his principal residence from Northern Virginia to a condo overlooking the Las Vegas Strip…Las Vegas, he says, represents "my chance to be intellectually challenged again" by a place that is "the closest thing to a melting pot America has to offer."

Intellectually challenged in Las Vegas? (He also owns a house in Los Angeles and an apartment in New York for when he needs a break from the intellectualism on display at the Circus Circus.) What intellectual challenge does Luntz think he’ll find in the steam trays of a $5.99 lobster buffet? Is he planning on ripping off a casino, Ocean’s Eleven-style?

But the sad really gets cranked up to eleven towards the end when Luntz talks about wanting to break into Hollywood and his love of The Newsroom.

Luntz would also like to break into Hollywood as a consultant, but he can't get his calls returned. He can't figure it out. He thinks it must be a partisan thing.

One of the constituencies attacked in the most vile terms by the conservatives Frank Luntz works for and enables are Hollywood liberals, who have heard over and over again how they are sick perverts forcing their terrible values down the throats of Real America. Now Hollywood won’t return Luntz’s phone calls. We’re going to go out on a limb and suggest that yes, he has probably burned a few bridges.

When he's at home in Los Angeles, The Newsroom is the high point of Luntz's week. He turns off his phone and gets a plate of spaghetti bolognese and a Coke Zero and sits in front of his 85-inch television, alone in his 14,000-square-foot palace. "That's as good as it gets for me," he says.

Hahahahaha, we can’t even. The image of schlubby sad middle-aged bachelor Frank Luntz all alone in his giant L.A. mansion brooding in front of his enormous flat-screen TV while the spaghetti bolognese goes cold and the Coke Zero goes flat might be the height of pathos. Or it would be, if it wasn’t clear from this article that Frank Luntz is still a clueless conservative asshole with the self-awareness of a rock. Frankly, after all he has done to create the poisonous discourse he now decries, we think a lifetime of loneliness is too good for him.