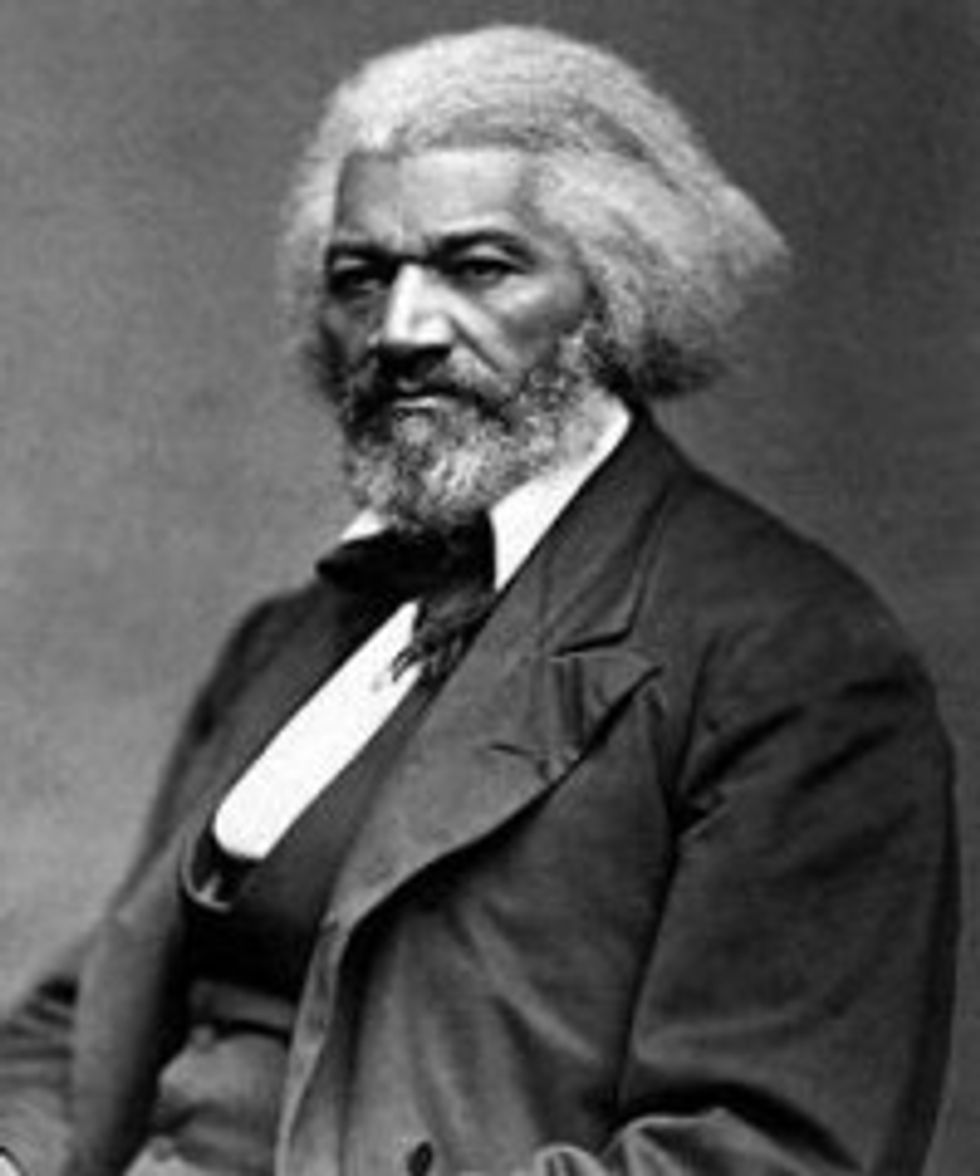 On Friday we were all fascinated by thetale of a Tea Party-sponsored minority outreach panel at CPAC gone horribly wrong. The head of a group we had never heard of, the Frederick Douglass Republicans, led the panel and had a very nice discussion with a young man who is in no way racist just because he praised segregation and asked why Frederick Douglass could not have been more grateful that his former masters had given him food and shelter. One would think such comments would be grounds for dismissal from decent society, but again, Tea Party. So good news for the indecent! FDR head (heh, see what we did there?) K. Carl Smith released a statement that after the panel, he and Scott Terry talked and Smith explained the FDR (heh) message and Terry bought a book, and they “left as friends.” Probably went right to the nearest roadhouse to pound a few brewskis and gripe about the woman reporter who really disrupted the panel by asking about the lack of minority women at the Seneca Falls Convention in 1848, because women, what are you gonna do, right fellas?

All of which led us to wonder: what is a Frederick Douglass Republican, and what is the group’s message of racial transcendence that it carried to CPAC so that Tea Party people can pat themselves on the back for having a black friend? So over the weekend, we took a look at the Frederick Douglass Republicans website. Hoo boy! Join us for some epic headdesking after the jump.

The first thing we can tell you is that a Frederick Douglass Republican is someone who apparently learned history from context-free nuggets of info he or she read on the back of a placemat in a Shoney’s somewhere in Arkansas, and then posted on the home page of the FDR (heh) website, in a field titled “Did You Know.”

Wow, Democrats sure were dicks, back in the nineteenth and first half of the twentieth centuries, before the party transformed from a mostly regional party based in the South into one that fought for civil rights and all the old racist Dixiecrats moved on over to the Republican Party and it became the mostly regional party based in the South. Again, we cannot believe how many times we have to keep saying these words: SOUTHERN STRATEGY! RICHARD NIXON! STROM THURMOND! DIXIECRATS! <headdesk>

Also, perhaps Frederick Douglass Republicans would like to know why the slave trade was abolished in 1808, when things were moving in the right direction and we were only fifty-seven years and incalculable amounts of bloodshed and human suffering away from ridding the country of the scourge of official state-sanctioned slavery. Also that it was not the trade per se that was abolished, just the importation of slaves from other countries. Here, we will Google it for them. Oh look, the answer is right there in the Constitution these morons claim to revere so much they have all but tattooed it on their chests. <headdesk>

Furthermore, yr Wonkette spent some time reading up on Frederick Douglass and while he certainly associated with the Republican Party a hundred and fifty years ago, we cannot for the life of us find the part of his biography where the great orator endorsed some of the fetish objects of modern conservative thought like states’ rights (a trope the South still uses to obfuscate the real cause of the Civil War) and unregulated capitalism. We’re also pretty sure that, seeing as how one of the great causes of his life was suffrage for African-Americans and women, he would not have liked all those anti-voter-fraud laws Republicans were pushing through before last fall’s election that mostly disenfranchised the minority voters who tend to vote for Democrats. Would Frederick Douglass have been okay with 102-year-old African-American woman Desiline Victor having to make multiple trips to her polling place and standing in line in Florida for over three hours to cast a vote? You FD Republicans go on and noodle over that one while we <headdesk>.

Douglass also fought hard for integration of schools because educational facilities for African-American children were so vastly inferior. Would he have been happy to see modern-day Republicans pushing to defund our education system when so many inner-city schools are still vastly inferior to the schools in more affluent (white) suburbs, thanks in large part to already unequal funding? We’re betting no. We’re also betting he would not have loved school vouchers, as his point was that all schools should be equally able to educate children, not that all poor, inner-city kids should equally have the opportunity to ride public transportation for four hours a day to go to schools far from their own families and communities. <headdesk>

Realistically, FD Republicans, there is no way to know what Frederick Douglass would think of today’s world because he is fucking dead. That is the nice thing about appropriating a dead guy’s image as a symbol for your own movement: he is not around to tell you that you are a giant jag-off.

Which brings us to this video where K. Carl Smith tells a roomful of patriots at a Tea Party boot camp what it means to be a Frederick Douglass Republican. As best we can tell, he simply appropriates the name Frederick Douglass, adds the word Republican to the end of it, inserts some blather about freedom and liberty, and presto! He has created a foolproof shibboleth to ward off the accusations of racism that dastardly liberals forever hurl at the Tea Party. Not required, obviously: a fact-based understanding of Frederick Douglass’s life and work.

K. Carl Smith, you fit in perfectly in the modern Republican Party. Not because of your politics, but because you are a two-bit huckster selling Rocco Farnsworth’s Amazing Phantasmagoric Race-Neutralizing Tonic to a bunch of rubes with the collective IQ of dryer lint. You’re a goddamn hero of capitalism.