Freepers Excited About Prospects Of New Civil War, Yet Again 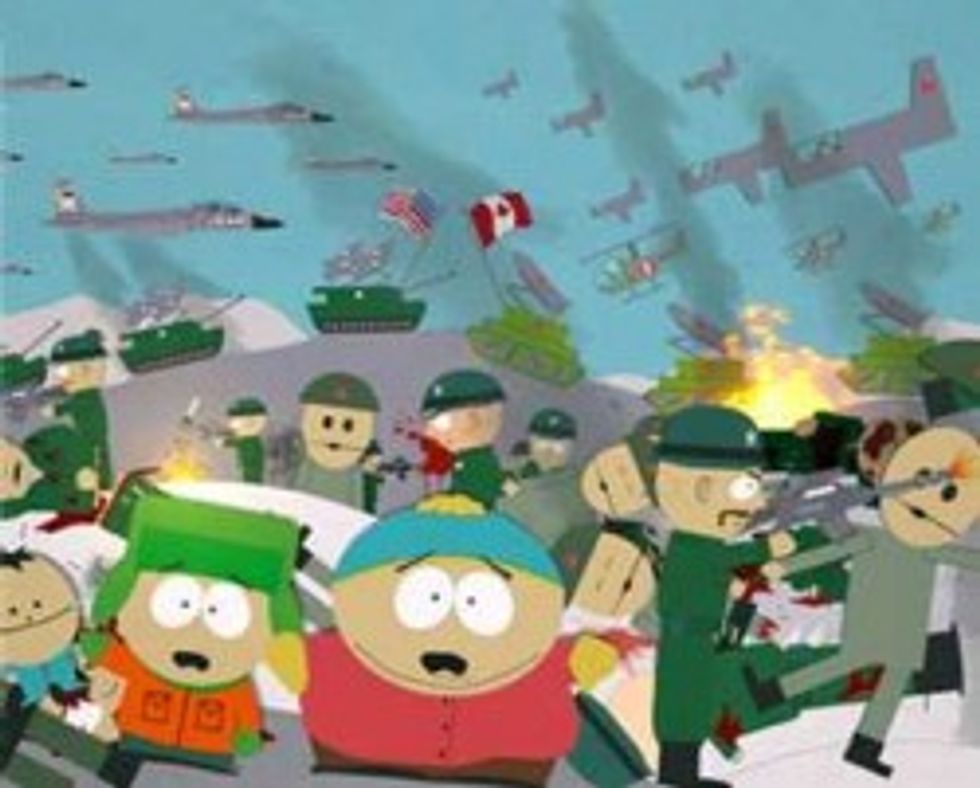 Our friends over at Free Republic do not have a lot of confidence that U.S. America can possibly last much longer, what with all the socialism and the welfare and the fiat money and the welfare and the food stamps, also Obama will take everyone's guns. Also, welfare. So they are ever vigilant for the first glimmer of a chance to actually refresh the Tree of Liberty with the blood of tyrants, or at leastto talk about what they'll do for sure when SHTF, which they are totally ready for. Heck, their serious concern about a second Civil War is so deep that FR even uses a "CW2" tag so readers can keep track of the many posts on the topic. The latest addition to the ouvre is "When The Music Stops -- How America’s Cities May Explode In Violence," by one Matt Bracken, which originally ran on the Western Rifle Shooters Assn. blog. Mr. Bracken is also the author of the "Enemies Foreign And Domestic" trilogy of novels, which is, surprisingly, self-published, and which absolutely does not simply scream "Turner Diaries fanfic." (Link includes excerpts. Oh boy.)

So anyway, as a very credible author of paranoid military thrillers, Mr. Bracken is certainly well-qualified to "give us the skinny" on how the coming disintegration of America may "go down," so that we can all be "locked and loaded" for it! Based on his extensive study of social trends, military tactics, and ideas pulled out of his ass, Mr. Bracken believes that the coming Troubles will be ignited when "a cascading economic crisis, even a temporary one, leads to millions of EBT (electronic benefit transfer) cards flashing nothing but zeroes" and/or the supermarkets stop accepting the worthless funds that are not backed up by gold or something. (The details of how the economy would collapse to this degree are not important, because he wants to move along to the rioting).

Then, once the minorities find that they can't get food with their food stamps, they will go on a looting rampage, like they do. Again, never mind that not quite half of food stamp recipients are white, or that 41% of families using the program also have some employment income -- those are minor distractions that get in the way of the fun tactical narrative about urban warfare that Mr. Bracken would like to focus on, thank you. Once The Blacks (Bracken prefers the military-thriller-sounding acronym "MUY" -- "Minority Urban Youths") have looted all the grocery and convenience stores and there's no more food, then "A single truck loaded with food or gasoline would be perceived to be a Fort Knox on wheels and subject to immediate attack" -- yes, you should now be thinking of Reginald Denny during the LA Riots! Also, Mr. Bracken would like you to know that he is Not Being Racist, Just Being A Realist Who Recognizes The Harsh Realities:

Some locales will divide upon religious or political lines, but they will not be the dominant factors contributing to conflict. In the American context, the divisions will primarily have an ethnic or racial context, largely because that makes it easy to sort out the sides at a safe distance. No need to check religious or political affiliation at a hundred yards when The Other is of a different color.

We Americans are all about doing things the easy way, so, sadly, visible racial and ethnic features will form the predominant lines of division.

See? He doesn't LIKE writing this stuff, but he has to take a cold hard look at reality, even though he shakes his head sadly at that reality. So THEN, the MUYs will "move their activities to the borders of their ethnic enclaves" and attack "major intersections and highway interchanges where non-MUY suburban commuters must make daily passage to and from what forms of employment still exist." (Again, no black people have jerbs, DUH). You just know that the following paragraph was written with a raging stiffy:

Some of those trapped in their cars will try to drive out of the area, inevitably knocking down MUY pedestrians and being trapped by even more outraged MUYs. The commuters will be dragged out of their cars and kicked or beaten to death. Other suburban commuters will try to shoot their way out of the lines of stopped cars, and they will meet the same grim fate once they run out of bullets and room to escape.

Who will save these poor white commuters? Another acronym will save them, or at least take revenge: the Suburban Armed Vigilantes, or SAVs! Heroic teams of combat veterans who "have acquired graduate-level educations in various aspects of urban warfare," will take up arms against the MUY mobs! (Mr. Bracken appears to think that America's combat veterans are all white, somehow.) And they will be better-armed, because while the mobs will have a motley mix of knives, pistols, and AK-47s, the combat vets will have AR-15-based semiautomatic rifles with optical scopes. And hunting rifles! They will deal death from a distance! A few paragraphs of gun porn later, Bracken treats us to a "Sniper Ambush Scenario" in which radio-equipped sniper teams drive their pickups to an area overlooking a likely Urban Chokepoint and shoot them some MUYs!

The result is a turkey shoot. One magazine of thirty aimed shots per rifle is expended in under a minute, a coded cease-fire is called on the walkie-talkies, and the trucks drive away at the speed limit. The canvas covering the truck beds contains the shooters’ spent brass. If the trucks are attacked from medium or close range, the canvas can be thrown back and the two snipers with their semi-automatic rifles or carbines will add their firepower to that of the driver and spotter.

Back at the intersection, complete panic breaks out among the rioters as a great number of bullets have landed in human flesh. Over a score have been killed outright, and many more scream in pain for medical attention they will not receive in time. The sniper ambush stops the flash mob cold in its tracks as the uninjured flee in terror, leaving their erstwhile comrades back on the ground bleeding. The commuters trapped in their vehicles may have an opportunity to escape.

Hah! Panicky MUYs won't even help their screaming bleeding friends in the face of superior firepower!!!1! Bracken goes on: there will be a corrupt government crackdown on the SAViors, a big ol' civil war that lasts for years, and then eventually an uneasy truce as everyone retreats to ethnic enclaves separated by high concrete "Peace Walls," just like Northern Ireland! (Why is this man not already in charge of our urban planning?) Oh, or maybe we'll fall into a centuries-long "New Dark Ages;" that could happen too. Bracken ends his jeremiad with appropriate solemnity:

Most of us wish we could turn back the calendar to Norman Rockwell’s America. But we cannot, for that America is water long over the dam and gone from our sight, if not from our memories. John Adams said, “Our Constitution was made only for a moral and religious people. It is wholly inadequate to the government of any other.” If that is true, judging by current and even accelerating cultural shifts, we might already have passed the point of no return.

The prudent American will trim his sails accordingly.

Again, he is not advocating anything. Just urging "us" (non-MUYs of course) to be ready, is all. Apparently, the simple expedient of adequately funding nutritional assistance programs is NOT a reasonable option.