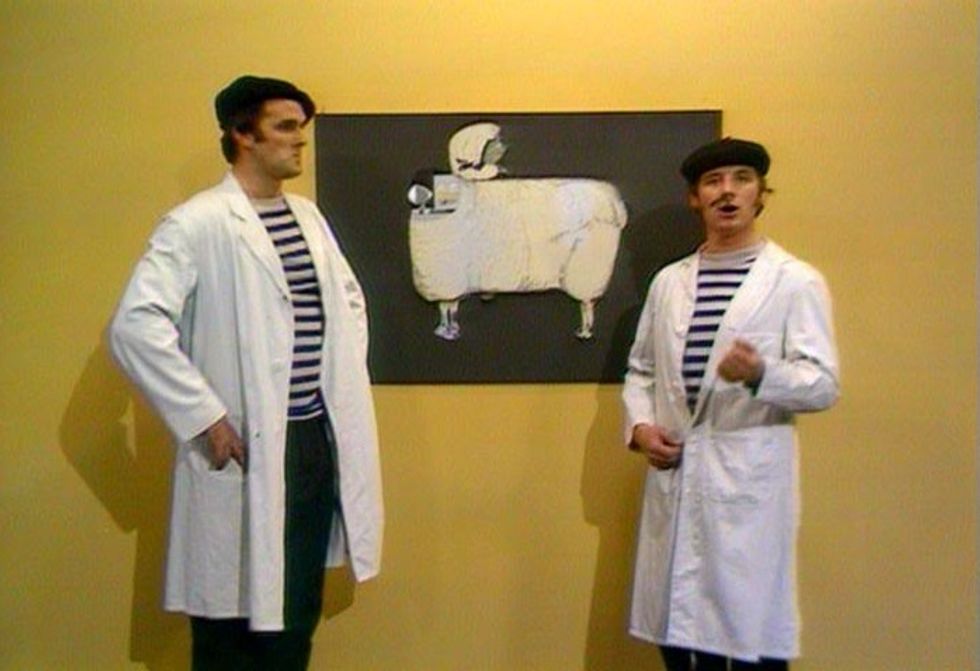 With just a day to go before France's presidential election on Sunday, hackers posted to the internet a huge mess of documents hacked from the campaign of centrist (or scary banker neoliberal, oh noes!) candidate Emmanuel Macron. The Macron campaign said the documents, posted to media sharing site Pastebin, included thousands of emails and other internal campaign documents, plus a lot of completely fake documents intended to make the campaign look bad.

The data dump was timed to come just before the mandatory cut-off of campaigning under French law, leaving the Macron campaign only enough time to release a brief statement condemning the maneuver before it was required to go silent; French media are also not allowed to report on the campaign during the day before polls open:

Article L49 of the electoral code states it is illegal to “broadcast to the public by any means of electronic communication anything that could be considered electoral propaganda” or for anyone to “bring to public attention any new element of electoral argument at a time when the target has no possibility to provide a useful response before the end of the election campaign”.

That's a pretty neat trick! Unleash the ratfucking just in time for the ratfuckees to have little time to respond. Very lulzy! We'll take a wild guess France may rethink that 24-hour news blackout law, which was intended to allow voters to reflect on their choices without a lot of campaign noise, but this time shut down the channels that could debunk the ratfucking.

This is how your conspiracy sausage is made.

Pre-election polling showed Macron with a huge lead over fascist-lite candidate Marine LePen, so the dump of hacked/faked documents is unlikely to significantly affect the election outcome; like other dirty tricks during the campaign, including good old fake news stories spread by 4chan morons, it seems instead intended to delegitimize Macron. The French paper Le Monde says the first documents were actually relayed through 4chan and on English-language Twitter accounts belonging to Trump fluffers. Yes, we're paraphrasing.

The actual hacking, according to the statement by Macron's En Marche! campaign, appeared to have taken place several weeks ago, and hit computer accounts belonging to the campaign itself and top staffers.

“Coming in the final hours of the campaign, this operation clearly amounts to democratic destabilisation as was seen in the United States,” it said, adding that En Marche! had “consistently been targeted by such initiatives” throughout the campaign.

It said “many false documents” had been added to genuine stolen documents on social media “in order to sow doubt and disinformation” as part of an operation “clearly intended to harm the movement”.

The authentic documents were all lawful, however, and “reflected the normal functioning of an election campaign”, the statement said. Their publication “does not alarm us as to the prospect of any questions being raised about their legality”.

Despite the campaigning blackout, a top official with Le Pen's Front National party, Florian Philippot, asked on the Twitter machine -- in the best "Just Asking" tradition -- "Will the Macronleaks reveal anything that investigative journalism has deliberately killed?" Heck, he may even know a few things himself, if only he were allowed to say them, don't you know.

And surprise, surprise, the hack of Macron's campaign is probably linked to Russian intelligence, according to cybersecurity experts:

Vitali Kremez, director of research with New York-based cyber intelligence firm Flashpoint, told Reuters his review indicates that APT 28, a group tied to the GRU, the Russian military intelligence directorate, was behind the leak. He cited similarities with U.S. election hacks that have been previously attributed to that group.

"APT 28" is another name for the hacking group also called "Fancy Bear," which remains our favorite factoid of the Russian election hacking story.

So far, it doesn't appear anything scandalous is included in the leaked documents, but as we learned from Russia's hacking of the Clinton campaign, you don't need a lot of actual facts to set off the looneybirds. But with the document dump coming within a day of the start of voting, we're not sure even the most creative conspiracy fans have enough time to spin tiny threads in the emails into amazing stories of scandal. But even if they don't get rolling until the votes are in, we're sure the troll army will find something, like accusing Macron of leading a shadowy group of deviants who meet in a pizzeria's basement to drink the wrong wines with everything, or perhaps a scandalous rumor that Macron hates Jerry Lewis. Also, has Macron ever coughed in public? Why is he denying his Parkinsons symptoms?

We'll keep you updated as this story develops, particularly if we find out LePen has a foreign policy adviser named Michel LeFlynn.

Yr Wonkette is supported by reader donations. Please hit the "Donate" clicky below.