Fuck You Paul Ryan, The Pope Hates You And You're Going To Hell 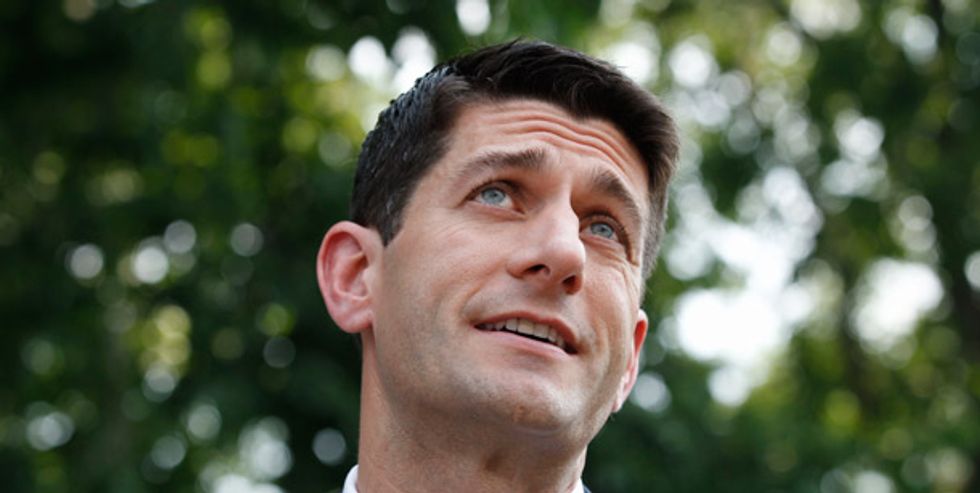 It's a good look for telling people to eat cake

Now that he's fulfilled his dream of passing a Big Fat Tax Cut For Rich Fuckwads, Paul Ryan is dragging his horrible granny-starving ass back to Wisconsin, where he can retire and not especially worry about his former colleagues going on to slash Social Security and Medicare, since mysteriously we just don't have the revenue for that stuff anymore. He's accomplished his life's work, like a salmon that has already spawned, so now it's just a matter of waiting for the bears to come. But before Paul Ryan disappears behind the door of his survival vault, insulated against the screams of the dying (same goes for a job at the American Enterprise Institute), let's take a look back at some of Paul Ryan's especially terrible moments.

Paul Ryan HateLoves Children The Most

Who could ever forget the time Paul Ryan stole a child from the book An Invisible Thread and plopped the poor kid down into a supply-sider speech about how the government shouldn't feed poor people? In the book, a hungry homeless boy asks his benefactor to please buy food, make lunch, and put it in a brown paper bag to take to school, instead of giving the kid money to buy his own meals, because "when I see kids come to school with their lunch in a paper bag, that means someone cares about them."

In Ryan's version, the kid doesn't want food hardly at all -- what the kid wants is a parent's love, not government cheese. The food isn't even the point. And to prove that liberals actually hate poor people, he explained that liberals those bastards, want poor people to have food:

“What they’re offering people,” Ryan homilizes, and he is talking about liberals, “is a full stomach and an empty soul.”

We Are Still Trying To Make 'Dishwatergate' Happen

There was also that time in October 2012 when Mitt Romney's veep candidate and also Paul Ryan -- same guy, if you can believe that! -- made a big show of going to a homeless shelter in Youngstown, Ohio, that had already finished serving breakfast for the day. But he wanted to be photographed Helping the Disadvantaged and highlighting the wonderful efforts of volunteers, so the bastard charged into the kitchen to wash some already-clean dishes with his family. And on his way out, Ryan even mumbled something about being glad to meet some homeless dude whom he didn't even punch in the face!

Unfortunately, the president of the local St. Vincent De Paul Society complained to WaPo that Ryan "did nothing. He just came in here to get his picture taken at the dining hall." So to show their Christian love for the least of their brothers, Republican Catholics vowed to withhold donations to the Youngstown St. Vincent de Paul, and also flooded the phone lines with nasty calls. Hey, somebody should tell Laura Ingraham about that!

Paul Ryan Grew A Beard Once, So That Happened

Yes, really. And some wingnut lady got all heart-fluttery about it. Just wait til he has a beard, shuffles around in a nasty old bathrobe, and takes to wearing Kleenex boxes on his feet for slippers, like Howard Hughes!

The most truly memorable feature of Paul Ryan's political ideology was his unstinting dedication to the proposition that the poor must be punished for being poor, and the rich must be rewarded for their virtue. Not for nothing did Charlie Pierce dub Ryan the "Zombie-Eyed Granny Starver." At least Ryan learned his lesson from the Romney campaign, and "apologized" for slurring poor people who get government benefits, especially the white ones. But soon he was back to normal. Just last spring we learned that, as a young frat bro at Kappa Delta Let Poor People Die, Ryan already dreamed of slashing Medicaid. As the point man on the Republican plan to strangle Obamacare, Ryan made it abundantly clear he had no idea what "insurance" even is.

We face a great precipice. And Paul Ryan is urging us forward.

And while he couldn't quite manage to kill Obamacare, because he sucks, Paul Ryan finally birthed -- like some ungodly eldritch beast on Hell's Stygian shore -- the one actual legislative "win" of Donald Trump's presidency, the Big Fat Tax Cuts For Rich Fuckwads Act of 2017. It was an awful nightmare of destruction that will make America an objectively worse place, and Paul Ryan couldn't be prouder.

Fuck you forever Paul Ryan, we hope you step barefoot on a Lego block in the middle of the night. And that it's one of those little one-stud fuckers that's all pointy and shit. And after that, maybe you could bark your shin on the coffee table really bad, and fall on your bottom, right in a puddle of cat sick that you didn't even know was there.

Yr Wonkette is supported by reader donations. Please click here to send us money. We love you as much as we do not love Paul Goddamn Ryan.