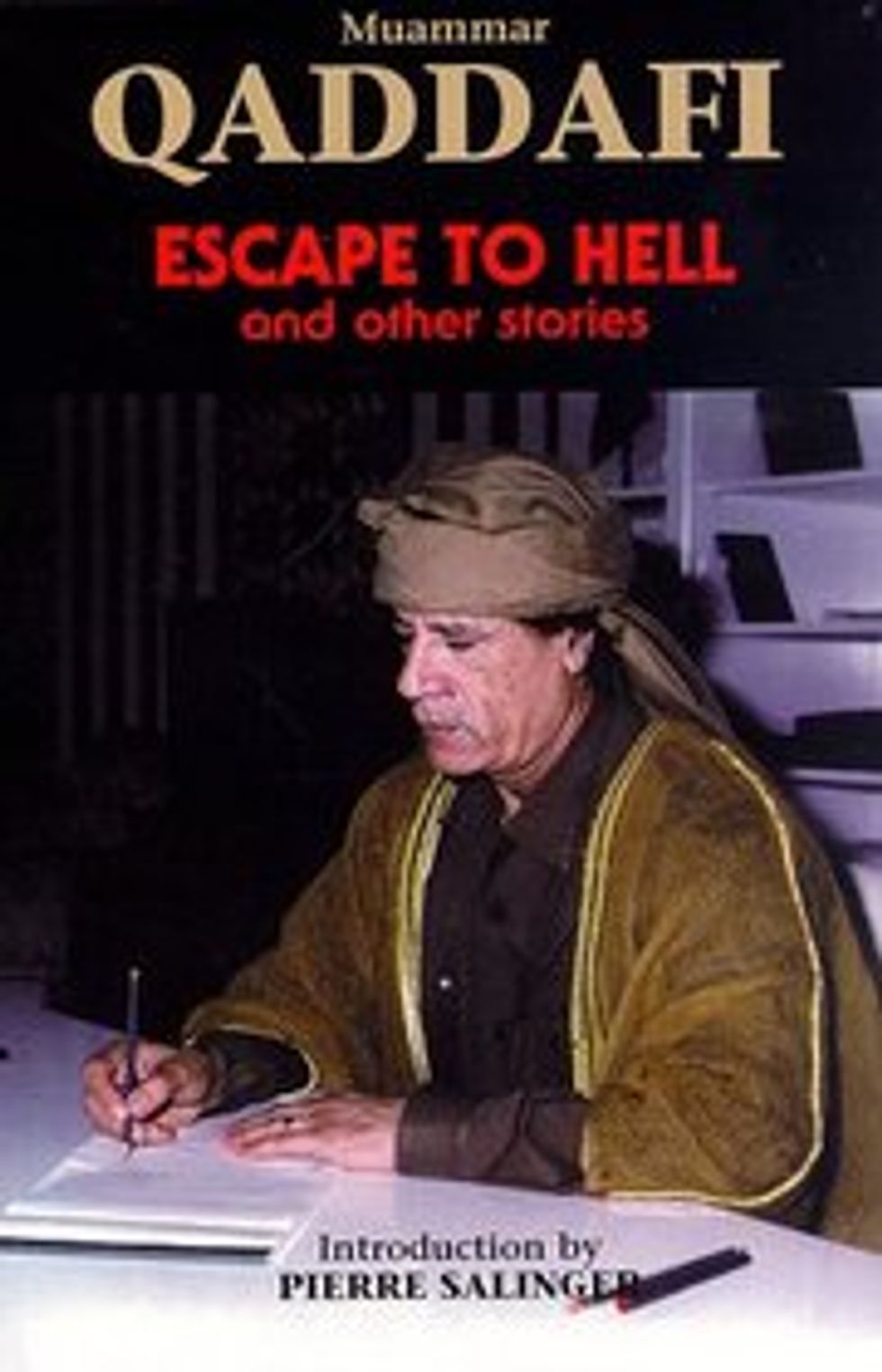 It would be a shame if the Brit-Frog-Yank bombs raining down on Libya right now destroyed any libraries or bookstores. Not because books are valuable or important (they aren’t; the Internet proves that, scientifically) but because “short story” collections written by one of humankind’s more outlandish dictators are curiosities worth preserving (unlike “books” in general). It’s one thing to blow up Gaddafi’s tanks and artillery; it’s quite another to incinerate copies of the Colonel’s collection of “stories,” Escape to Hell. Because God, what insights.

Many dictators seem to fancy themselves writers of one sort or another. Mao Zedong banned all kinds of poetry except patriotic hymns about grain production, but he made an exception for himself and his entire adult life wrote academic imitations of classical Chinese poetry. Stalin, while not much a writer himself, took a serious interest in Russia’s best writers (by killing them). Saddam Hussein wrote trashy romance novels and flowery poetry; that actually seems to be how he was spending most of his time when the U.S. invaded in ’03. He continued to write in prison, even after he was sentenced to death. Kim Jong-il has apparently written books about his theories of film.

Colonel Gaddafi’s preferred form is what this Guardian review calls "rambling prose feuilletons." The feuilleton was a proto-blog post form popular among newspaper readers in Weimar Germany and the former Austro-Hungarian Empire in the '20s-'30s, and in America too, because back then eccentric billionaires occasionally paid good writers to write whatever they wanted.  Wide-ranging columns or essays about whatever, basically, filtered through the writer's experience (taking a walk around town, running into a crippled prostitute in a bar late at night, passing out in a steam bath, etc.).

ANYWAY, this is exactly what Gaddafi does in Escape to Hell. These aren’t stories at all, but stream-of-consciousness rants against cities, Islamic fundamentalism (Muammar hates it too!), and the loneliness of the astronaut life. He celebrates the Bedouin lifestyle of tents on the open dunes; he accuses city life of leading to kidney theft and other crimes (this is pretty much true, right?); he tells a fable about an astronaut who realizes he doesn’t understand life on Earth and kills himself (this one is called "The Astronaut’s Suicide"). In one piece, "Stop Fasting When You See the New Moon," Gaddafi reveals a strange regard for 1991 chart-topper General Norman Schwarzkopf.

He also tells us a bit about his career as a teevee journalist:

The fact that Colonel Gaddafi writes stories and essays at all brings up all kinds of questions. For example:

Does Gaddafi write longhand, perhaps in one of his tents, surrounded by lethal virgin bodyguards? Or does he bang this stuff out on a computer plugged into an oil well, or maybe even a Soviet-made typewriter?

Given his day job he probably DICTATED the whole thing, HI-OHHHHH!!!

We apologize. Moving on: if you enjoy surreal, unfocused, unedited essays about politics and life, Escape to Hell is for you.

It’s a pitiful thing that pretty soon Gaddafi might not even have a job. For reasons no one can quite explain (Nicolas Sarkozy was fed up with Carla strumming her guitar and singing English poetry, in her underwear, all day? Barack Obama decided 2.5 wars at a time wasn’t enough? David Cameron, uhhhh…um…well, at least he consulted Hogwarts or whatever it's called). What will the colonel DO when he gets unseated by the rebels and their Western allies?

You should probably email Commanding Editor Ken Layne and ask him to hire Gaddafi as a Wonkette writer. Then again, that would mean he’d have to hire an Arabic translator as well, and really, do those even exist?

Escape to Hell and Other Stories by Muammar Gaddafi, Blake Publishing, 288 pages, $24.39

If your favorite dictator has written a work of literature and you want to see it reviewed on Wonkette, e-mail greer.mansfield@gmail.com and we can totally figure this out.