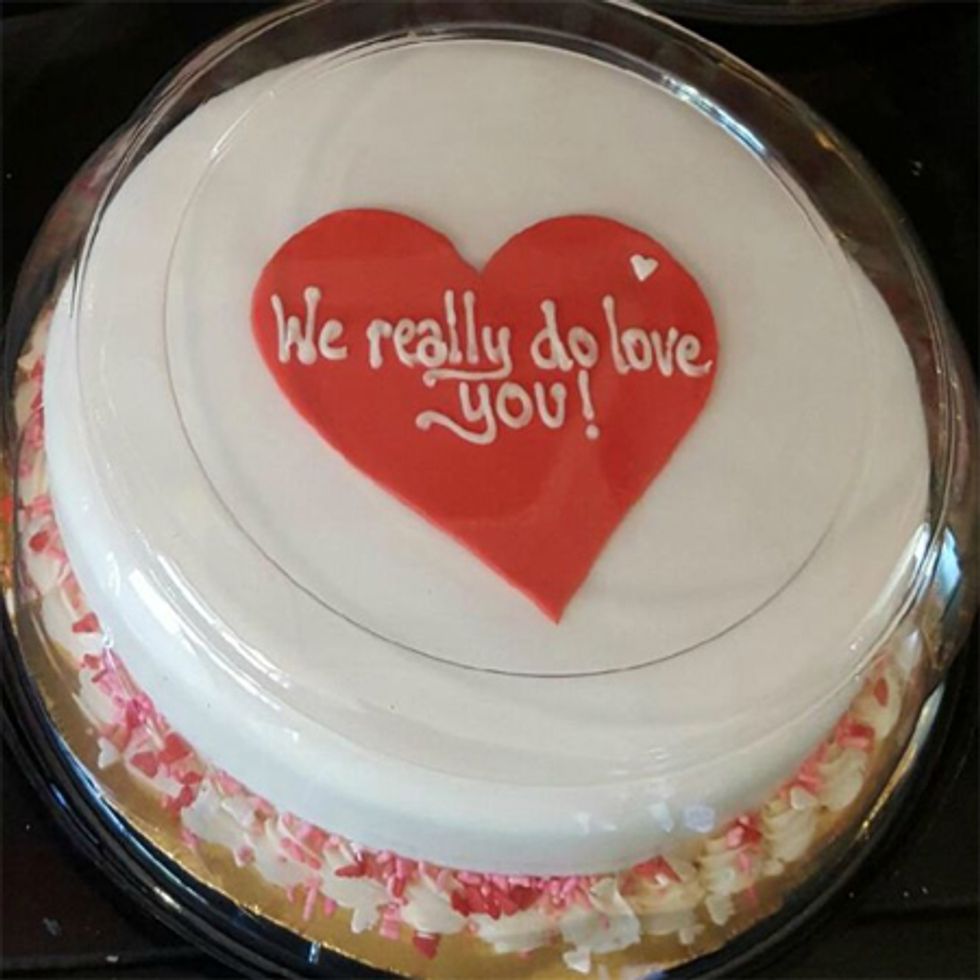 It's a beautiful gesture of love, accompanied by a really bad movie

You probably remember the sad story of Aaron and Melissa Klein, the Oregon bakers who refused to bake a penis cake for a lesbian wedding a couple of years back, then were forced to close their bakery by the Free Market, and were eventually told to pay $135,000 in damages to the couple for breaking the state's anti-discrimination laws (way to create a martyr, there, Oregon). All because they didn't want to compromise their God-given right to refuse to put flour, sugar, and eggs in a bowl for people who do sex things in a non-God-approved manner! Happily, the Kleins are somehow getting by -- helped by roughly a half-million dollars in donations from fellow bigots -- and last week sent out a bunch of cakes to ten LGBT organizations to let them know that the Kleins don't hate gays -- they love them and don't want them to go to Hell. Look at this beautiful cake o'love!

The Love is a Lie

Oh, but they didn't only send out cakes to the ten LGBT advocacy groups. They also sent along DVD copies of a Jesus-says-quit-it-with-the-gay-stuff movie called Audacity, which is all about why Christians cannot be silent when it comes to warning gay people, constantly, that they're headed for Hell, and that it's really churlish of gays to consider that some kind of "discrimination" instead of the beautiful act of love that it is. Indeed, as the movie's poster makes perfectly clear, gay people expecting to be left alone by Christians is actually a form of censorship:

The love that dare not speak its name is no match for the love that will not ever shut the fuck up, ever, not once

Melissa Klein told the Heritage Foundation exactly how much she loves the gays:

“I’m not asking anybody out there to change their beliefs and believe the way I do,” Melissa said. “I’m just saying they want to live their life freely and I also do, too.”

Which is why she's sending out cakes with a DVD that tells people that they'd better change their beliefs and believe the way she does, or they'll roast forever in the ovens of Hell, without ever getting any frosting. The Kleins sent out the cakes and DVDs after meeting with the movie's producer, New Zealander fundamentalist goofball Ray "Banana" Comfort. Why, a cynic might even be inclined to think that the whole project had less to do with sending a powerful message of Christ's love than it does with publicizing Comfort's seriously stupid movie. Which, yes, Yr Doktor Zoom will almost certainly feel compelled to review. Talk about persecution!

Comfort explained to the Charisma News website why the Kleins shouldn't be silenced and persecuted simply for ignoring public accommodation laws they don't like:

The filmmaker and best-selling author used an analogy to help explain how the Kleins and other Christian business owners feel.

"I'd like to ask Melissa's accusers: Would they bake a cake for a wedding where lion meat would be served at the reception? I think most animal-lovers wouldn't do it, not because they hated the couple, but because it would be condoning something that compromised their deeply held convictions. They simply believe that eating lion meat is morally wrong. Christians love gay people, but to lend support to a same-sex wedding is to compromise deeply held convictions."

Way to get right on top of a trending news story from a month ago, Ray! Were we proprietors of the Cakes We Like Bakery, we're pretty sure we'd limit our conversation to cake-related subjects, like whether the happy couple likes ganache. At most, maybe we'd make a follow-up call to confirm they still want the couple on the top to look exactly like Josh and Anna Duggar. How's this for audacious: It simply wouldn't occur to us to pry into other details of the wedding. Not only would we not fret about the rest of the menu, we also wouldn't ask if the groom's tux was made by child laborers in a Bangladeshi sweatshop (of course it was), whether the readings at the wedding would include excerpts from Twilight, or whether the couple wiped their asses with paper products made by Koch Industries subsidiaries. None of our business, which would, in this scenario, be cakes and cakes alone.

Oh, and now that their ordeal has left the Kleins about a half-million bucks richer -- roughly $100K from a fundraiser that GoFundMe or Satan shut down, plus another $400K and counting from another crowdsourcing site that will apparently run forever -- have they knuckled under to the tyranny of the state and actually ponied up the $135,000 damage award that Oregon ordered them to pay the couple they denied service? Why would they go and do that? They've been ruined by all this persecution, and a mere surplus of $350K certainly is no reason to actually comply with the order.

Besides, now that Ted Cruz has featured them in a campaign ad about all the persecuted Christians in America, they should expect even more donations. Maybe they'll even be able to send out more cakes and DVDs to LGBT groups, to spread their important message of love and publicity. Perhaps, if the money keeps rolling in, the Kleins can personally shove their faces in the windows of some LGBT groups' offices and say "Jesus LOOOOOOOVES You!"