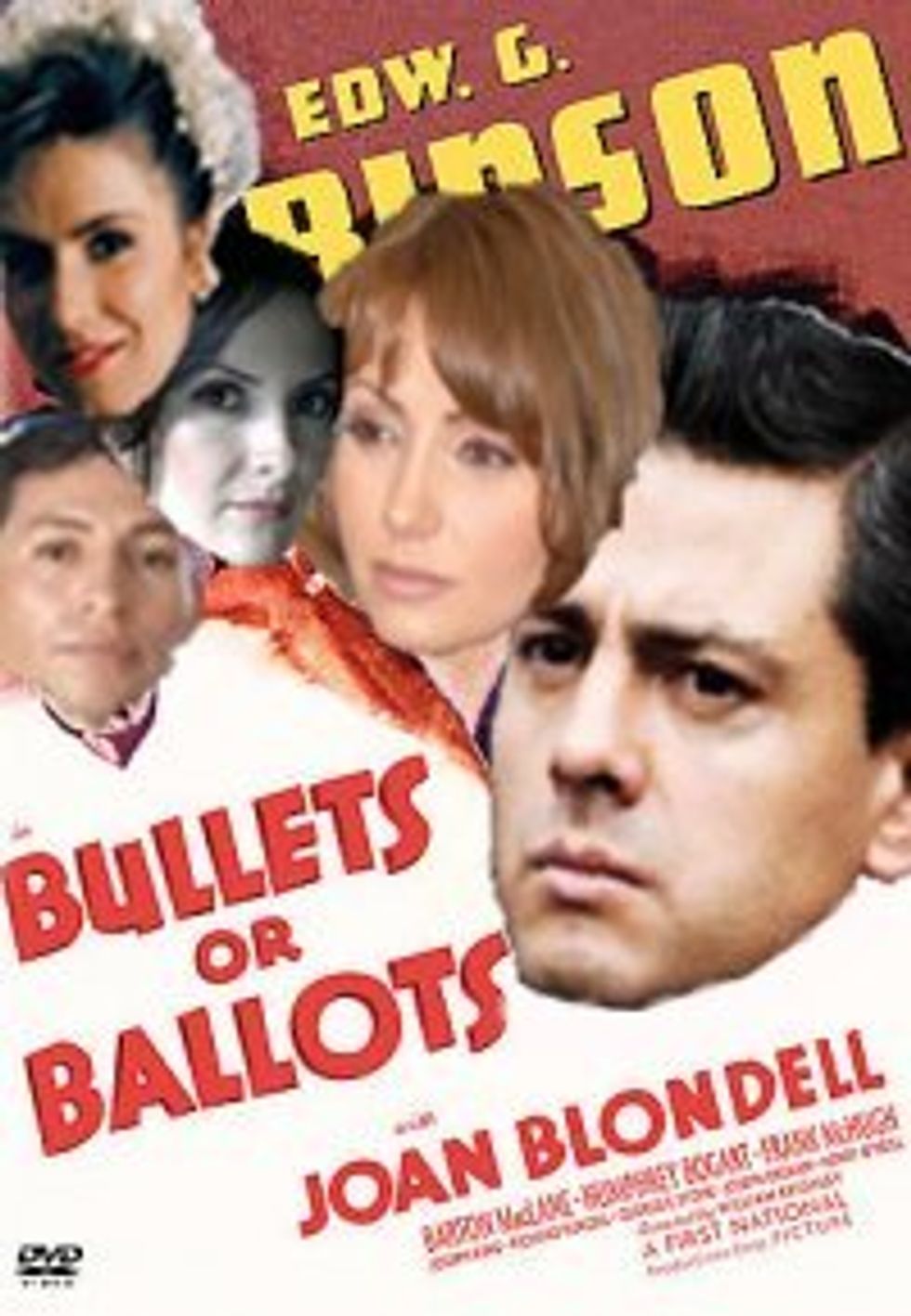 The more we learn about Mexican president-elect Enrique Peña Nieto, the scarier things get. Behind the Pompadour and circumstance, there lurks a dark and nasty side to the pretty-boy president-to-be.

Peña Nieto, during what he calls a "difficult time of crisis" in his first marriage to Monica Pretelini, cheated on his wife with two different women and had two children outside of his marriage. He was forced to admit this because one of his ex baby mamas (the other child died and its mother is still unknown), Maritza Diaz Hernandez, won't shut up on Twitter and Facebook. According to Maritza Diaz Hernandez, Peña Nieto tried to convince her to go and live in the US for six months and not return until after the election on July 1st. But when she refused, he got his best buddies in the Mexican press to give him some TeeVee time so he could 'splain his infidelities and preempt any bad press he might get from her revelations. At least he didn't have her killed. Yet.

The voting public didn't blink. Peña Nieto continued to be the adored and favored candidate, despite his little peccadilloes. It's the old "boys will be boys" syndrome, especially in Mexico, where it's expected and understood that rich and powerful men can and should do these things, to prove their virility. In fact, Ashleymadison.com, the dating website for married people, proudly put Peña Nieto on a billboard in Mexico City, saying, "Unfaithful to his family. Faithful and committed to his country." Ashley Madison's representative said, "No one would have found out about Peña Nieto's extramarital affair, if he had employed Ashely Madison's services."

But it seems that Peña Nieto's dalliances have not been limited to the ladies.

On May 12, 2007, Peña Nieto's deceased wife's bodyguards were murdered while accompanying Peña Nieto's three children, their maternal grandparents and aunt in Veracruz. Only the truck of the bodyguards was targeted; the family was unhurt. Estrada Negrete attests that these were the same bodyguards who would come and pick him up, in the same truck, for his assignations with Peña Nieto.

On May 17, 2007, just four months after the death of Peña Nieto's wife, Estrada Negrete participated in an LGBT event, posing in a red dress. The photo of him in a dress made it into the papers and since then, Estrada Negrete's life (as well as the lives of his family and the mothers of the school children who supported him) has been in grave danger. Estrada Negrete says this was the end of his relationship with Peña Nieto, since he had always been warned by Peña Nieto that there would be dire consequences if he came out of the closet.  Estrada Negrete lost his job, was arrested twice for minor charges, tortured and gang-raped in jail, had death threats written on the walls of his school and inside his home and finally someone tried to kill him with a plastic bag over his head. Left for dead on the street, luckily the Red Cross saved him. In a wheelchair he escaped to the United States in 2010 with his political asylum papers in hand. The Inter-American Commission on Human Rights filed a precautionary measure in Mexico to protect Estrada Negrete and his family and eventually was able to get the Mexican government to pay Estrada Negrete's teacher's back-pay. He lives in San Diego now, still fearing for his life but denouncing Peña Nieto and telling his story any chance he gets.

Adding to the mystery, on the day of Peña Nieto's wife's death, the announcements were all over the place. First, the governor's own spokesperson announced that she had died from an overdose of anti-depressants (other reports said sleeping pills), then that she was brain dead, then finally, the doctor who had been treating her for two years made an announcement that she had been having seizures and that she had suffered, this time, from a fatal one, which caused cardiac arrhythmia and in turn respiratory arrest, from which she died. No wonder Peña Nieto was so confused in a May 2010 TV interview with respected Univisión journalist Jorge Ramos, when Ramos asked Peña Nieto how his wife had died. He couldn't answer. He babbled on and on like he did at the Guadalajara book fair when asked what books he'd read that influenced his life. Ramos had to remind him that his wife died of an epileptic seizure. We think that Peña Nieto should have said in Guadalajara that the book that most influenced him was, If I Did It, by OJ Simpson.

Of course, all the bad things happened when he was just a tyke (in his thirties). Now he's a man (in his forties). And president. So we're sure he's learned his lesson, right? Well, all is not well in the soap-opera fairy tale of Peña Nieto and Angelica Rivera, his soap-opera star wife. On March 13 of this year, Angelica Rivera was admitted to a hospital, bruised and beaten. Mexican radio station Radio Formula confirmed that Rivera was hospitalized for two days in March after she "fell from the stairs." On May 29, Mexican actress Laura Zapata (Tony Mottola's sister-in-law) tweeted that Angelica Rivera was severely beaten by Peña Nieto and hospitalized again. This time, no media outlets confirmed Angelica's stay in the hospital, because according to Laura Zapata, the attending physicians were told not to say a word.

If Peña Nieto's past is any indication of what the next six years of his presidency will be like, we better start popping the popcorn now. And maybe take a second look at our romantic Mexico weekend getaway plans. Surely there's a safer place to go, like Syria.

Muchasisimas gracias to Wonkette reader RevJuanMessycan, for invaluable insight and assistance with research and translation.