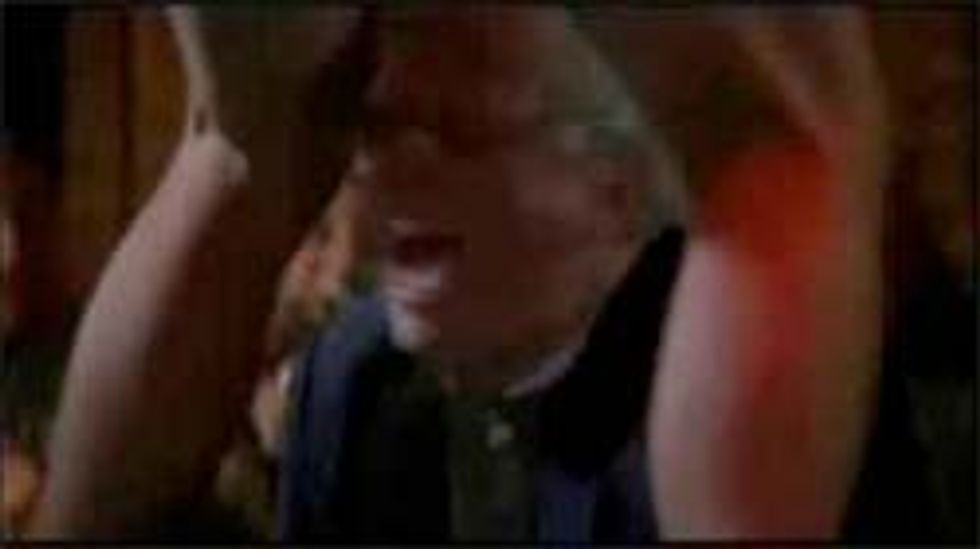 We know that it's not easy being a gay Republican! We can ignore the fact that the Republican Party, as a policy, would rather that gays not exist, or that, if they do exist, their emotional attachments not be given any recognition by any level of government whatsoever; people will do some crazy stuff for lower taxes! No, the real sad thing about being gay in the Republican Party is that you'd have to spend all your time with people utterly lacking in any sense of whimsy or theatricality, whose idea of a funny joke is a picture of Barack Obama with a bone through his nose and whose idea of drag is dressing up as Patrick Henry. Well, Los Angeles's gay Republicans are tired of fitting in with this gaggle of squares, and will be "out and proud" this pride weekend by dipping their balls into the mouths of various politicians.

OK, not quite really! But the LA Log Cabin Republicans will be holding a "Tea Bag Toss" at Christopher Street West, in which flamboyant partying gays will be given the opportunity to win prizes by throwing tea bags into the open mouths of depictions of Jerry Brown, Nancy Pelosi, or ... Sarah Palin?

[LA Log Cabin Republican President] Schmidt said including Palin was an attempt to be nonpartisan and he noted that she raised the sales tax while mayor of Wasilla, Alaska.

Oh, God, Sarah Palin raised taxes! Why did it take the gays to make this clear to the American people? BURN THE LIBERAL AT THE STAKE!

Anyway, we are all for gay Republicans cheerfully embracing the alternate meaning of teabagging that outrages teabaggers so, but are saddened that the teabags are going into people's mouths. Anyone who saw John Waters's Pecker knows that actual teabagging involves getting balls rubbed on one's forehead:

John Waters says that the balls-in-the-mouth definition is a Britishism, so we should shun it as we do their filthy oil! We don't expect straight people to know these things, but really, we had higher hopes for LA's gays, even the Republican ones. (Thanks to hero tipster "Bruiser Spaeth" for the link.) [LAT]