Gay Satanists Pull A Romney All Over Fred Phelps's Mom 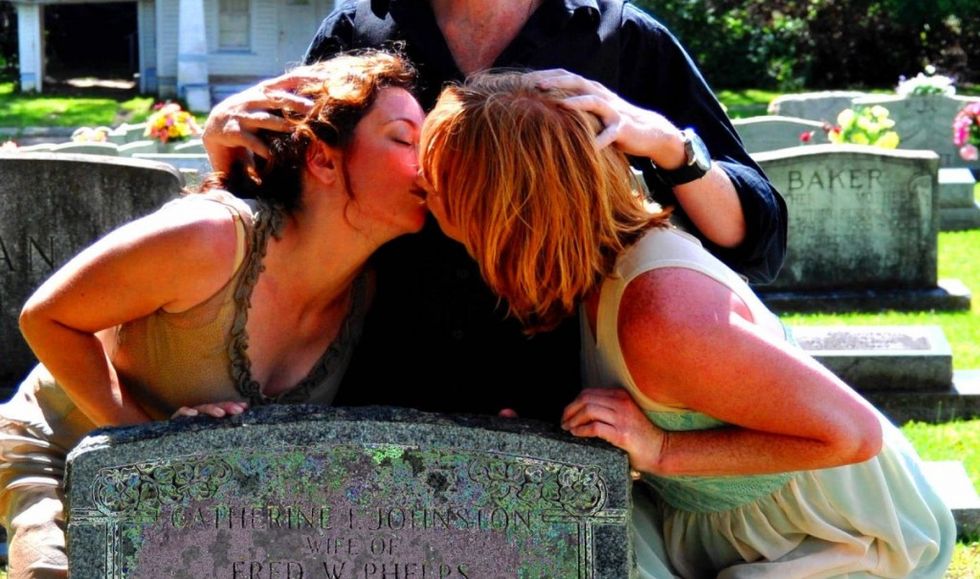 Do you see these pretty ladies kissing, on the grave of Fred Phelps's mom? Well, BOOM! Now she is gay, in the afterlife.

In addition to now being gay for eternity, Fred Phelps's mom now receives "female pleasure" every time you same-sex it up, on her grave.

Let us let the Satanists explain it, in their helpful Splainer "How To Perform Your Own Pink Mass":

Catherine Idalette Johnston is buried in Magnolia Cemetery, Meridian, MS. [section 11] Other same sex couples are invited to respectfully and tastefully express their mutual affection at Ms. Johnston’s gravesite. After a Pink Mass has been performed, every time a same sex couple kisses over the gravesite, the now-gay deceased is said to be pleasured in the afterlife.

Send your photos to info@thesatanictemple.com.

In addition to turning Fred Phelps's mom gay, just like LDS baptized Barack Obama's mom Mormon, post-mortem, the Satanists are performing other acts of civic responsibility as well! For instance, they are trying to clean up New York's disgusting highways as part of the "Adopt New York's Disgusting Highways" program, and they could use your help. So send the Satanists all your bones, for gayness, and the environment, today!