Gee Does It Seem Like Elizabeth Warren Knows More About Banks Than This Bank Lobbyist Does? 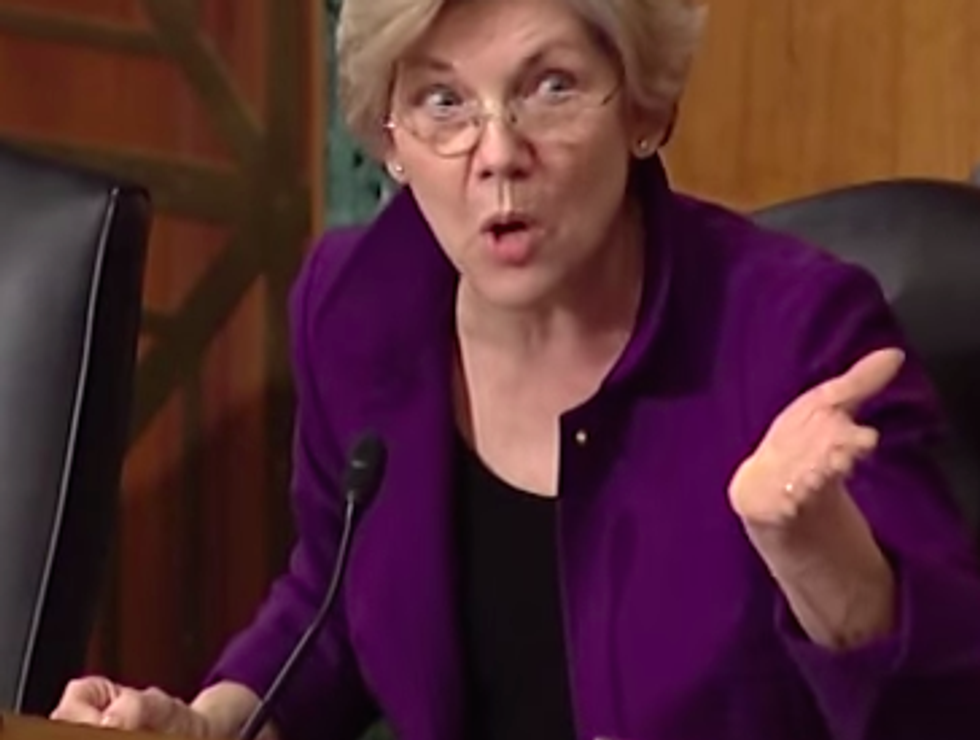 Sen. Elizabeth Warren has been so busy yelling, in her polite schoolmarm voice, of course, at ALL the bad guys -- Big Pharma and anti-vaxxers and her Senate colleagues on the other side of the aisle who think they work for Citibank (they do not) -- that it's nice to see her get back to her roots of yelling at those som'bitch banker types who tried to bankrupt America.

At a Senate Banking Committee hearing this week on regulatory relief for community banks and credit unions, Warren did that thing she does with one of America's top banking lobbyists, Chairman-elect of the American Bankers Association R. Daniel Blanton. He testified to the committee that little itty bitty community banks are suffering oh so bad under Big Government's latest bank-crushing business-murdering regulations, and gosh, if Congress doesn't pass some regulatory relief, these little neighborhood banks will collapse under the weight of all those burdensome "rules" and "laws," poor things. It's a tragic tale of woe, which Elizabeth Warren is not buying at all.

We’ve heard a lot today about how smaller banks are being smothered by unnecessary regulation, supposedly because of Dodd-Frank rules, like the new mortgage rules that went into effect in the first quarter of 2014.

Now, I’ve been looking for some hard data to support that claim. According to the latest report from the FDIC, the banking industry as a whole posted earnings of nearly $40 billion in the third quarter of 2014. That was a 7.3 percent increase relative to the third quarter of 2013. In other words, the banking industry did substantially better after the mortgage rules took effect in January of 2014.

So, Mr. Blanton, if, as you claim, community banks were particularly hard hit by Dodd-Frank’s new rules, why are they making more money since the rules went into effect and doing better than the big banks?

Sure, Mr. Blanton has an answer to that. "Well, I don’t really think there’s necessarily a direct correlation," he says, "between the mortgage rule passing and the profits of a bank."

Nope! That would be the wrong answer, sir.

"I thought that was exactly what your testimony was, as I read it," Warren politely scoffs. "And that is that the rules were tangling up the community banks so that the community banks couldn’t do business, and yet their profitability seems to suggest they’re doing better than ever, after the regulations went into effect."

Well, there again I don’t think it's because of the regulations that banks are doing better. I mean, it is tangling up our process to do mortgages, it’s making it much more difficult, it’s costing us quite a lot. Your statistics on the profits of our industry are right. We’ve done very well. But if you go back and average over the last 10 years, it has been a very difficult process, and just now we’re beginning to get some efficiencies and come back into the market and be successful, and we see these as constraints for us to where we’re having a hard time continuing to have that momentum.

Does Sen. Warren buy that explanation? What do you think?

Well, you know, I appreciate that. But like I said, the numbers show you’re really doing pretty well after these regulations. We know that all of the big bank lobbyists love to come into our offices and talk about how community banks are being crushed and they need our help, but a lot of the times, the legal changes that they’re asking for aren’t really about helping community banks.

Then Warren explains back to Mr. Bank Lobbyist everything that's wrong with a bill he specifically asked for in his testimony, "in the name of community bank regulatory relief." And how the big bank lobbyists like, ahem, Mr. Blanton, come to Congress begging for relief that does not actually help the little community banks at all, but gosh, it sure does help the big banks who practically broke our entire economy. And ACTUALLY, Mr. Bank Lobbyist, community banks are doing just fine under these new rules -- better than ever, in fact! So put away that tiny violin, pal, and stop pretending that deregulation is what the banking industry needs because NOPE and NUH UH.

If we really want to help the community banks, let’s start by getting rid of the $85 billion a year too-big-to-fail subsidy that we give to the biggest banks, year after year. Small banks aren’t getting that. Or let’s start by holding big bank executives accountable for committing fraud, like we do with small bank executives for committing fraud. Those are the kinds of changes that would help level the playing field for our community banks.

And BOOM, that is why we are loving Elizabeth Warren again today and every day forever.