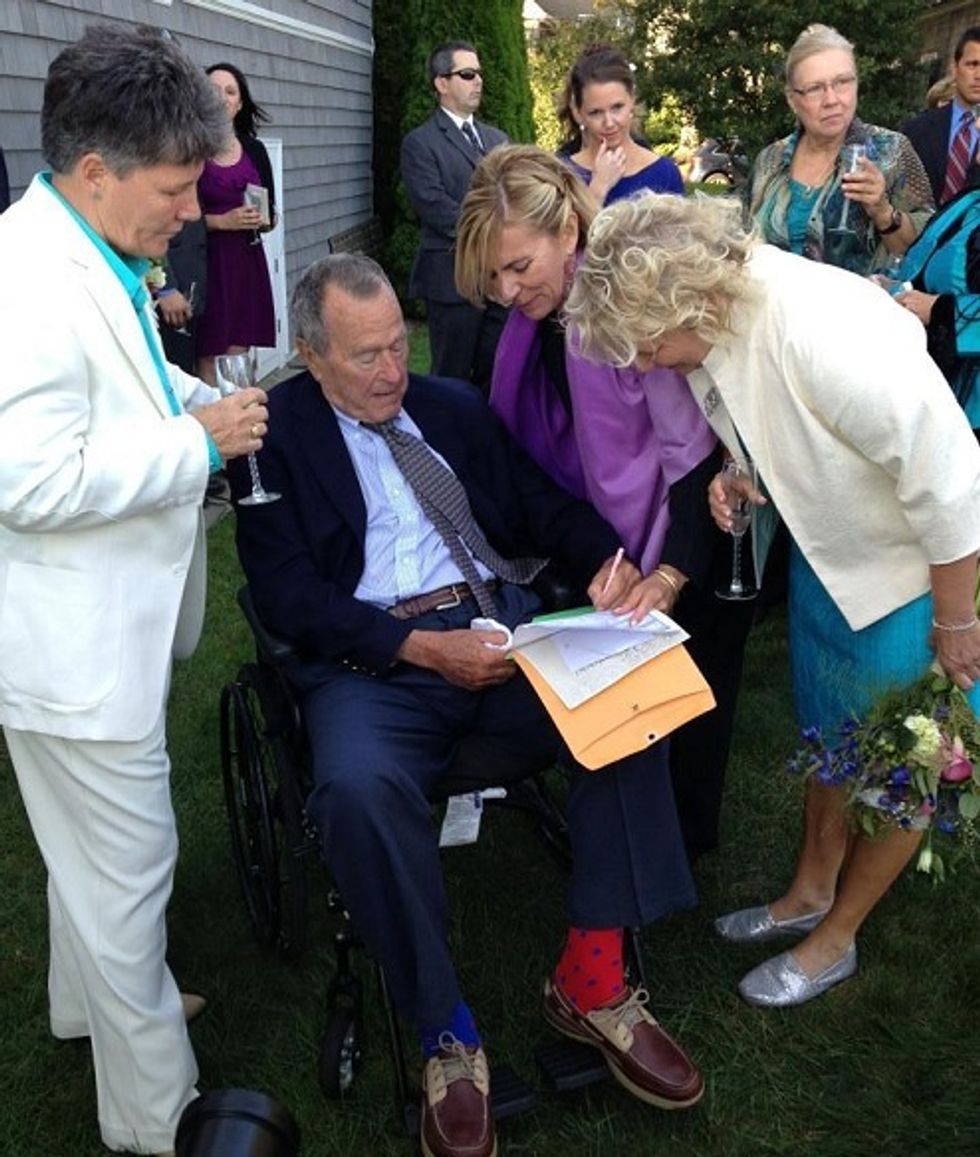 Poppy and his lesbian pals

WE KNEW IT! And also, WE CALLED IT, SORTA! Before we get to patting ourselves on the bottom for Knowing Things, let's get right to the very important news, that George H. W. Bush, former Republican president of America, is voting for Hillary Clinton, the wife of the dude what BEAT HIM FOR PRESIDENT. Guess some grudges are worth holding on to and others aren't! Poppy's all "Good game in 1992, Clintons!" but can't bring himself to say "It's OK that you are a living person" to Donald Trump, and that is why he is voting for Hillary:

Bush, 92, had intended to stay silent on the White House race between Clinton and Donald Trump, a sign in and of itself of his distaste for the GOP nominee. But his preference for the wife of his own successor, President Bill Clinton, nonetheless became known to a wider audience thanks to Kathleen Hartington Kennedy Townsend, the former Maryland lieutenant governor and daughter of the late Robert F. Kennedy.

On Monday, Townsend posted a picture on her Facebook page shaking hands next to the former president and this caption: "The President told me he’s voting for Hillary!!”

SHHHHHHH, KATHLEEN, IT WAS SUPPOSED TO BE A SECRET! But Townsend told Politico that yeah, Poppy is totally #InTheTank and #ImWithHer, and Poppy's spokesman neither confirmed nor denied it. You hear that, Trump? DID NOT DENY IT.

[wonkbar]<a href="http://wonkette.com/605110/is-george-w-bush-in-the-tank-for-crooked-hillary-clinton-we-are-just-asking"></a>[/wonkbar]Anyway, like we said, WE KNOWED this was going to happen. Barbara Bush, wife of Poppy, has said it's "unbelievable" to her that any woman would consider voting for Trump. Laura Bush has said things like "the next president, whoever he OR SHE might be," which is probably her way of saying IT'S GIRL TIME, IT'S GIRL TIME, I'M ABOUT TO VOTE FOR A GIRL NOW, and we're pretty sure she's not talking about that paste-eating goon Jill Stein. So we pretty much knew Hillz had the lady side of the Bush family locked up.

[wonkbar]<a href="http://wonkette.com/586522/george-w-bush-wanted-to-gay-marry-some-ladies-because-he-is-a-filthy-liberal-now"></a>[/wonkbar]And we were PRETTY SURE Jeb is voting for Hillary, because good God, the man has at least one shred of dignity left after that primary. And also, Jeb Bush is a well-known Hispanic voter, and we know how Donald Trump feels about the 'Spanics.

Oh, and remember in August, when George W. Bush, the younger, dumber ex-preznit named "Bush," did a fundraiser for Rob Portman, and though he didn't mention Trump by name, he took a giant ex-presidential piss all over everything Donald Trump stands for? There was also that time we learned that Bush The Younger really wanted to perform the lesbian wedding Daddy and Mama served as witnesses for, which told us what big liberal Subaru lesbians both former presidents really are, at heart. Of course they're #WithHer!

Oh, and remember how precisely ZERO members of the Bush family showed up at Trump's Republican Convention, probably because they were appalled in a very dignified, white people, Kennebunkport kind of way, and also because Bar likely threatened to dutch oven them with farts at the next Bush family Thanksgiving, if they showed up?

Plus, there are approximately one million former Bush officials who have gone on record saying they're supporting Hillary. Indeed, Politico points out that pretty much the only major Bush era official who's come out for Donald Trump is Dan Quayle, which makes sense because he's the kind of uneducated voter Trump loves very much.

So, in summary, and in conclusion, all the Bushes are voting for the Benghazi Emails lady, only stupid or bad people are voting for Donald Trump, and the only question left is when the entire Bush clan will appear in a Hillary campaign commercial. Cat's out of the bag, y'all, it's time to step it the fuck up, FOR THE AMERICA YOU LOVE.