George W. Bush Is Being Very Unkind To Donald Trump! 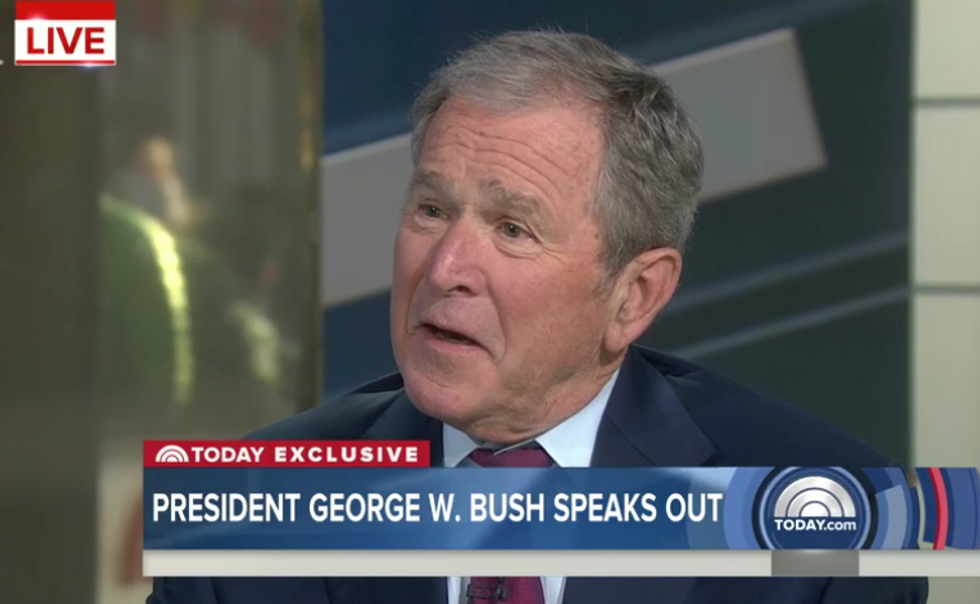 How and why are we feeling affection for this man?

Oh no, that guy we used to think was the worst president who ever lived, back when we were young and innocent, did an interview on the "Today" program, and he was unkind to Dear Leader Trump! Yes, George W. Bush, whose presidency looks downright brilliant compared to Donald Trump's, very obviously thinks Trump is a dumb twat, but he's too nice to say it that way. Instead he said things like this:

I consider the media to be indispensable to democracy. We need an independent media to hold people like me to account. I mean, power can be very addictive, and it can be corrosive, and it's important for the media to call to account people who abuse their power, whether it be here or elsewhere.

One of the things I spent a lot of time doing was trying to convince [a] person like Vladimir Putin, for example, to accept the notion of a free press. It’s kind of hard to tell others to have an independent free press when we’re not willing to have one ourselves.

SHOTS FIRED! This came mere days after Press Secretary Sean Spicer decided he didn't feel like doing a White House press briefing where mean "FAKE NEWS!" journalists could ask him hard questions about Trump's Russia scandal, and instead decided to have a little "gaggle" circle jerk in his office with Breitbart and Alex Jones or something. Totally normal!

As far as other nice things the former president said about how the thing squatting in the Oval Office is a real fuckup, Dubya said he's not sure whether we need a special prosecutor to investigate Trump's connections with Russia, but he'd be cool with it. For some reason Bush has faith in GOP Sen. Richard Burr, head of the Senate Select Committee on Intelligence, and that he'll get to the bottom of things with his investigation. (He should not have faith in Richard Burr.) The former president says we definitely "need answers" about just how far up Trump's ass Vladimir Putin's arm is, though, so that's good.

On Trump's Muslim ban, Dubya said, "It's very important for all of us to recognize one of our great strengths is for people to be able to worship they way they want to, or not worship at all" and also "I am for an immigration policy that is welcoming and upholds the law." MORE SHOTS FIRED!

Finally, Matt Lauer asked Dubya what he thought of Donald Trump crying about "American carnage" during his inauguration, and Dubya laughed, because Dubya might be A Idiot, but at least he's not as dumb as Donald Trump.

Anyway, Bush has some book to sell, full of paintings he did all by himself, and that is why he was on "Today." If one Bush interview isn't enough and you need more, you are weird, but here is another segment where he's interviewed by his daughter Jenna and Kathie Lee Gifford. He makes jokes about choking on pretzels and about Jenna getting arrested for having a fake ID, because LOL he ain't give a fuck.

WE give a fuck AND we're ad-free! Help us stay that way. For Merica!