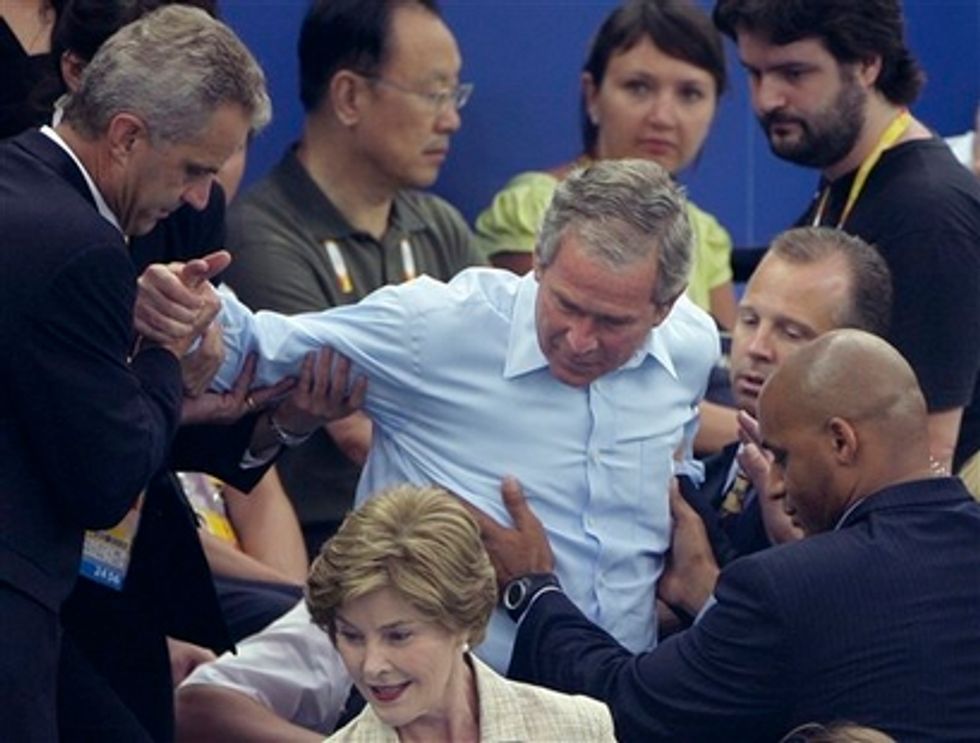 Isn't it great to have our previous president back in the news these days? How about this one: Helifted passages of his book out of other people's books and news articles? Yes, he did! Or rather, whoever was putting together his book did. Hey, c'mon, why would Bush want to remember stuff himself? It's much easier to copy and paste together other accounts of his life, switch a few words around, and call it a day. In fact, pages 48-164 probably seem so odd because they were lifted directly from the screenplay of W.: And then I turned to Rumsfeld and said, "Rummy, INT. H.W.'s KENNEBUNKPORT OFFICE - DAY. BUSH sits down." Oh, and he sort of let a guy on death row die despite needing a stay for a DNA check that it seems would have exonerated him. Cool!

The Huffington Post has a lot of these "lifted passages." Here's one:

The Bush White House challenged the accuracy of Bob Woordward’s account of the administration’s march toward war when he turned critical, but Bush relied heavily on those texts.

From Decision Points, p. 145: "I began my first Cabinet meeting since the terrorist attacks. As I stepped into the room, the team broke out in sustained applause. I was surprised, and I choked up at their heartfelt support. The tears flowed for the second time in two days."

From Woodward’s Bush at War, p. 65: "The entire Cabinet, meeting at the White House for the first time since the terrorist attacks, stood and applauded when President Bush entered the room. Caught by surprise, Bush choked up for a moment, the second time in two days he had lost his composure in front of others."

Hey, if these people already wrote books about him, what's the big deal? Are you really asking him to remember his own life and/or all the human beings he ordered dead? He can't do that. This is a man who laughs anew at SpongeBob SquarePants every morning even though he has seen every episode at least 10 times.

And then there's this:

Claude Jones always claimed that he wasn’t the man who walked into an East Texas liquor store in 1989 and shot the owner. He professed his innocence right up until the moment he was strapped to a gurney in the Texas execution chamber and put to death on Dec. 7, 2000. His murder conviction was based on a single piece of forensic evidence recovered from the crime scene—a strand of hair—that prosecutors claimed belonged to Jones.

But DNA tests completed this week at the request of the Observer and the New York-based Innocence Project show the hair didn’t belong to Jones after all. The day before his death in December 2000, Jones asked for a stay of execution so the strand of hair could be submitted for DNA testing. He was denied by then-Gov. George W. Bush.