George W. Bush Wishes Bush Tax Cuts Were Named After His Father, Not Him 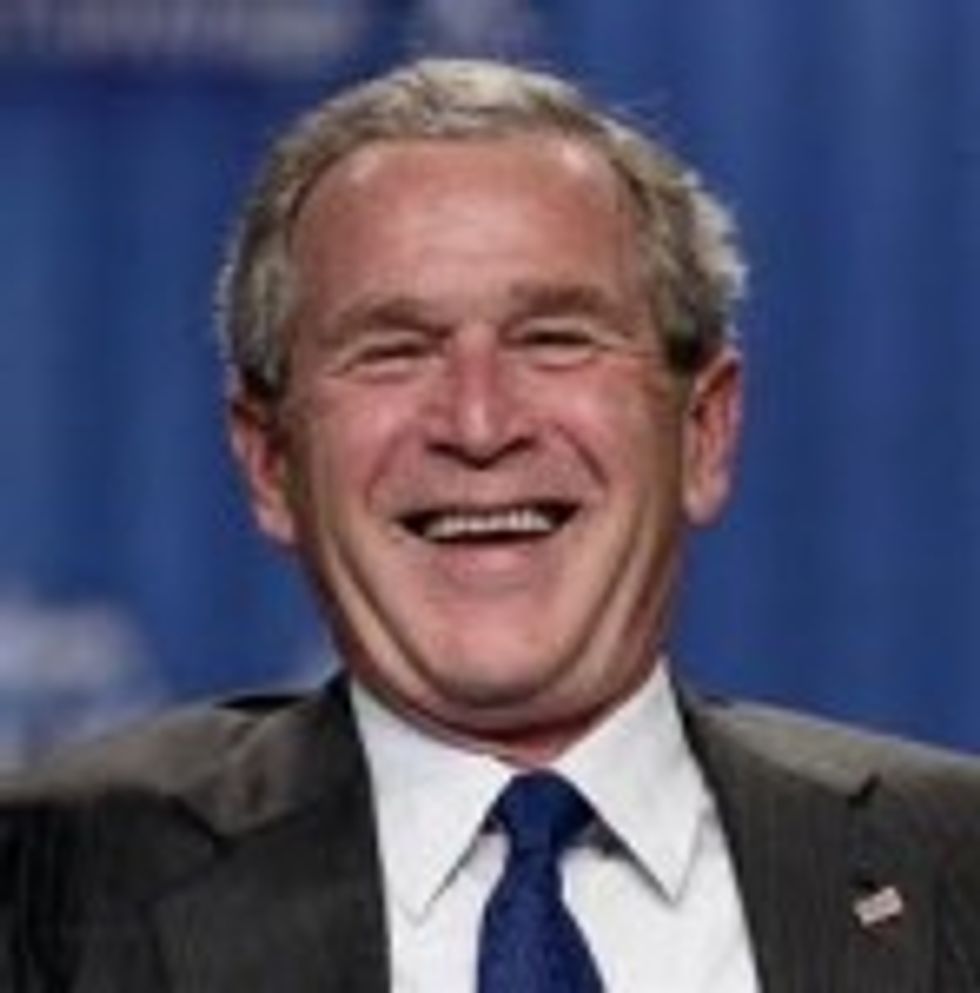 Former President and world-wide champion rodeo clown George W. Bush said Tuesday he wishes his name weren't so firmly attached to one of his administration's signature pieces of legislation known as the"Bush Tax Cuts." He recently made his feelings known at the New York Historical Society. But why is the former president having such a change of heart about his name on the cuts? Has he realized the damage the cuts have done to the middle class? Has been made aware that they favor the rich? Is he embarrassed at his hindsight review of his eight years? No, it is because nobody likes him and this makes him feel sorry for himself.

"I wish they weren't called the Bush tax cuts. If they were called someone else's tax cuts, they'd be less likely to be raised.”

Bush also stated, "If you raise taxes on these so-called rich, you're really raising taxes on the job creators," because that is a thing that all Republicans are now contractually obligated to repeat. Bush made sense once it was realized he was referring to the ‘so-called rich’ and not the ‘totally for sure rich.’ Due to a slight oversight, against the Republicans' wishes, even the ‘totally for sure rich’ get to enjoy piggy-backing off of the hard working, down-to-earth ‘so-called rich.’ Bush wrapped up his ‘Can you believe people still listen to my shit?’ tour by saying, "And if the goal is to create private sector growth, you have to recognize that the best way is to leave capital in the treasuries of the job creators." Most sane people think Bush is as transparent as the nightgown he got Jeff Gannon for Christmas.

Bush wasn’t entirely full of shit. He did also mention that, "I don't believe it's in the interest of our country to undermine our president and I don't intend to do so," which was a nice gesture while he was in New York speaking out against all of Obama’s economic policies. So, yes actually he was totally full of shit. Bush clearly disagrees with Obama proposals to allow the tax cuts to expire on households earning more than $250,000. Our current president wishes to enact the Buffett rule, which would require wealthy people like Warren Buffett to pay a higher percentage of their income in federal taxes than middle-class households because class warfare. Bush was heavily in favor of this until someone told him it was not about cutting in line at a buffet. Now, Bush claims he doesn’t care who cuts in line.

President Obama will be speaking about the ‘Buffet Rule’ in Florida, where the majority of people believe it is indeed rude to cut in line at a buffet but they totally do it anyway because they are outlaws. Mr. Obama’s biggest challenge in Florida will be clarifying the difference between Warren Buffett, Jimmy Buffett and an all you can eat buffet. Some people have claimed to have seen Jimmy Buffett cut in line at a buffet which has caused a great deal of confusion requiring government intervention in the form of a visit from Obama himself.

Citizen Bush is coming out with a book on economics (by his "institute") in the near future. It has contributions from 21 economists, five Nobel Prize winners and a cookie. Mr. Bush commented, "It's got to be a staggering thing for some of the cynics. I publish a book, and now the Bush Institute is publishing a book. They didn't think I could read, much less write a book," hahahaha this guy with the funny, but yes he is right. We are still sure he cannot read, and that is not funny, it is sad. [CNN]