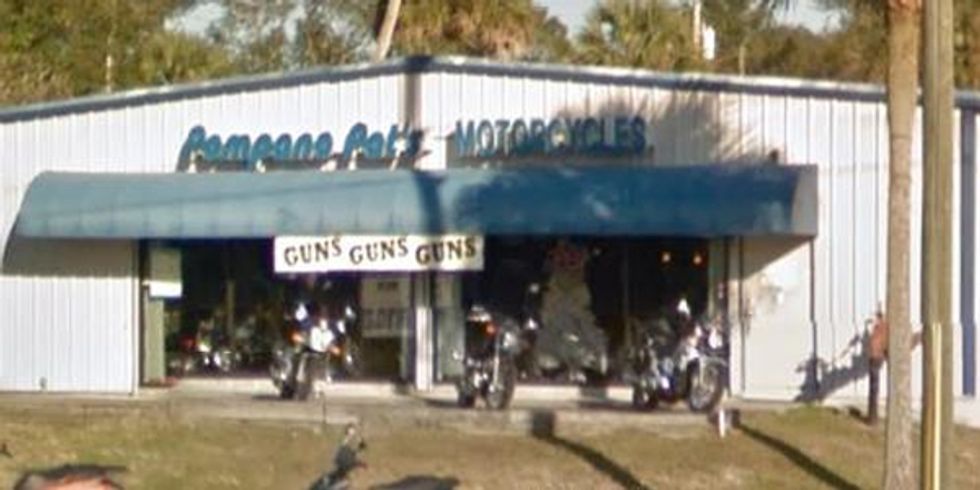 So here's the latest in the epic wanderings of George "Killer But Not A Murderer" Zimmerman: He got a great gigplaying Night Watchman for "Pompano Pat's," a motorcycle-and-guns shop in DeLand, Florida, the very same gun shop that made some headlines last year when owner Pat Johnson offered Zimmerman a free gun just days after he was acquitted of killing 17-year-old Trayvon Martin. And just to make things interesting, it's not an actual job, but more of a hobby or something -- Pat's was robbed earlier this month, and then Zimmerman just sort of showed up to sit around outside the store at night, keeping an eye on the place.

Johnson said that Zimmerman, on his own accord, has been spotted outside the store since the robbery earlier this month. The thieves stole rifles worth up to $5,000 and two mini-bikes, according to Johnson.

"I didn't OK it. I didn't know about it. I didn't authorize it. I didn't pay for it," Johnson said. "He had just watched Facebook and the news and just took it upon himself to come up here and sit."

Isn't that nice of him? It's almost as if he likes fantasizing about being a hero who stops crime, and lord knows nothing bad could come of that. It's not known whether Zimmerman was armed, because that's nobody's goddamned business.

Police stopped to see why Zimmerman was parked behind the store Sunday night, and when they found out that he was there with the owner's permission, though not as a paid guard, they left him alone. Here's the slightly creepy video from WKMG 6, which informs us that the police seemed rather star-struck with Zimmerman, and he even showed them one of his Famous Art Prints.

Johnson also told the TV station that Zimmerman's going to have to find a new pastime: "I sent him a text message telling him not to come back to the store anymore," Johnson said.

And that's the latest in the saga of George Zimmerman, the Ziggy of acquitted child-killers. Will he never win?