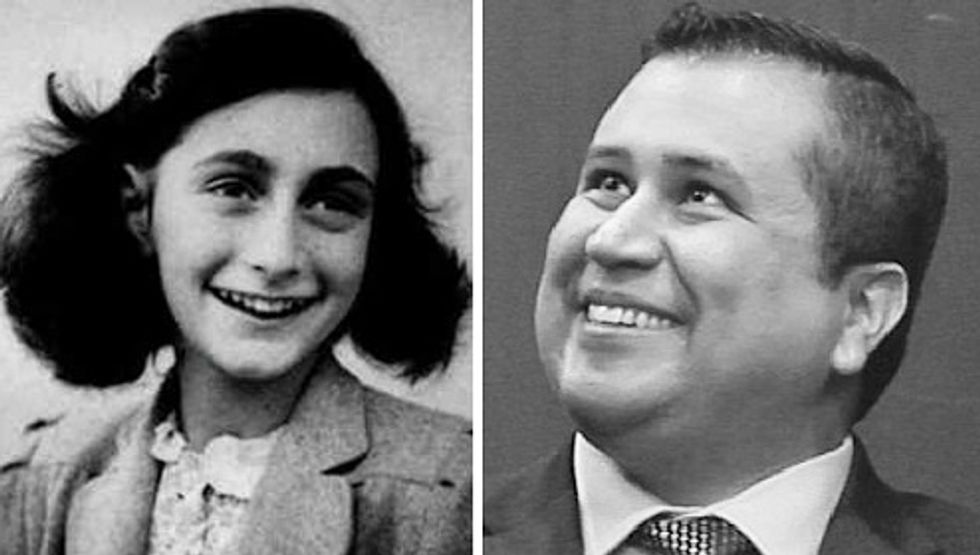 These days George Zimmerman is taking a cue fromall those people comparing themselves to Gandhi, andMandela, andRosaParks. Almost (actually, not "almost") to a man, those people were in fact fighting for the opposite of what Gandhi, and Mandela, and Rosa Parks were fighting for! (It was pretty funny, except for how it was dumb.) Realizing he could live (quite nicely) in Opposite Land, Zimmerman has reframed himself not as a person who victimizes anyone weaker in his path -- a teenage boy (at least when Zimmy has a gun), a woman (at least when Zimmy has a gun), another woman (at least when Zimmy has a gun....) -- but as the ultimate victim. Poor George, everyone is always out to get him. And that is why he is just like Anne Frank.

Do you not know Anne Frank, perhaps you were homeschooled? She was the young Belieber trapped in a (surprisingly spacious!) attic with Shelley Winters and Ed Wynn while the Nazis did mean things like tell the Von Trapps they had to sing in the talent show. She had a diary, which was full of preternaturally wise insights into mortality, humanity, goodness and evil. Then she was murdered, because humanity sucks.

Which of Anne's precocious insights into mortality, humanity, goodness and evil, has our old pal Zimmy chosen to highlight?

So, like we said before, or maybe we just thought it: George Zimmerman is a master manipulator who turns on tears on a dime and gets away with victimizing others every time. But he will probably succeed in recasting himself as poor, victimized Anne Frank, which makes those of us oppressing him ... yeah, you guessed it! Hitler!

But what if ... what if ... George Zimmerman had never read the Diary of Anne Frank, and then he did, and the simple, girlish -- Pollyannaish even -- sweet and beautiful words started to seep into his corroded soul, and he began to think about his actions for the first time in his life? And he began to mourn, truly, for what he had done and the person he was, and determined to live as a fully human man instead of a broken stunted shard of aggression? And he became ... oh, how should we put it ... someone good at heart? Do we believe in redemption? And true, deep repentance? Or are we those crabbed, stunted unforgiving folks who would cut someone off from humanity with no chance of rehabilitation (usually we call those stunted folks "conservatives")? We're Catholic (yes, and Jewish), so we believe in redemption, that if anyone is truly sorry, then we must forgive. (This is also why we take stupid boyfriends back the 92nd time.)

Haha, we are just kidding, it's Zimmerman, the manipulative sociopathic piece of shit, and they can never feel remorse, and too when we were thinking that stuff before, honestly, we were high.