Georgia ACLU Director Quits Job To Be A Transphobe, Wingnuts Declare Selves Absolved Of All Bigotry 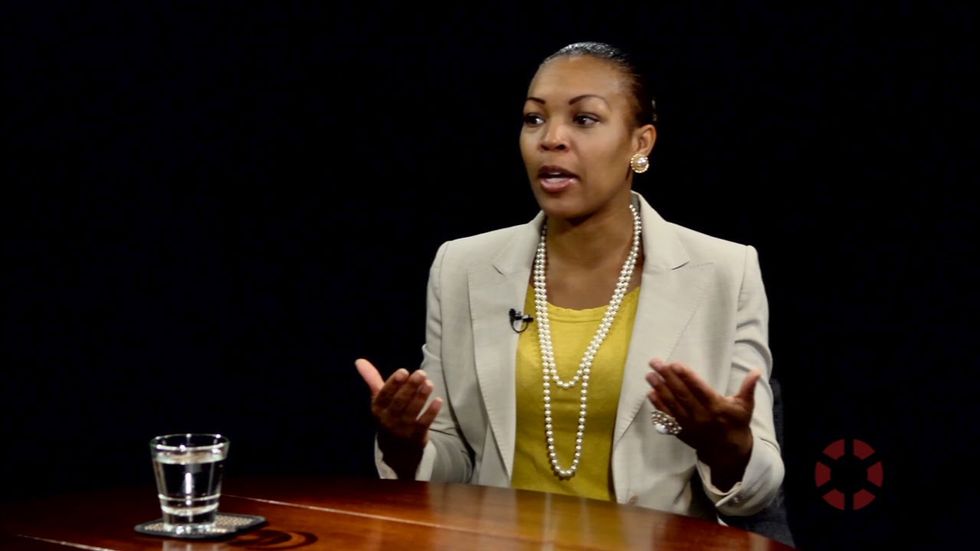 Maya Dillard Smith, the interim director of the Georgia chapter of the ACLU, resigned this week over the group's support of the rights of trans people to use the right bathroom.

Why? Well, in a statement provided to Atlanta Progressive News, Smith explains:

“I have shared my personal experience of having taken my elementary school age daughters into a women’s restroom when shortly after three transgender young adults over six feet with deep voices entered... My children were visibly frightened, concerned about their safety and left asking lots of questions for which I, like many parents, was ill-prepared to answer.”

Naturally, throughout this week, conservative sites like Breitbart, LifeSite News, and The Blaze have been breathlessly reporting this news. Because if a black female ACLU director agrees with them that trans people are scary perverts hell bent on watching them pee, then obviously they are absolved of all their bigot sins, and are in the clear. HOORAY!

You know what is never actually a good argument for anything? Saying you just don't know how to explain something to your kids. You know how you explain things to a kid? By explaining it to them! It's actually not that hard, and I think it's probably a lot easier to explain trans people than it is to explain why the sky is blue. Children are actually a lot better at processing and adjusting to new information in that way than adults are, because the whole world is new information to them and they are constantly having to do that.

Back in the '80s (and unfortunately still for some), it was "How could we possibly explain GAY PEOPLE to our children?" You know how my mom told me my uncle was gay? She told me my uncle was gay. You know how she told me what being gay was? I actually do not, because I feel like it came around the same time she told me what being straight was. Am I dead now? Nope. I am also relatively sure that she had an easier time explaining this to me than trying to explain mimes to me.

As for being scared or upset? Kids are scared of things all the time! I was terrified of the banshee from Darby O'Gill and The Little People and Large Marge from PeeWee's Big Adventure. I once burst into inconsolable tears because we drove past a stable and I was suddenly convinced I was a foundling and my real parents were horses. It's your job, as a parent, to help them to not be scared or upset about things.

One of Dillard Smith's primary concerns is that no one has spent enough time really explaining the whole transgender thing to her, and answering her questions about it. She had questions! And there was no room for robust debate! Which is weird, because I assume she has the same internet the rest of us do, and there is certainly a lot of good information out there about this! The fun part of that is that it doesn't require annoying people who are probably a little tired of explaining these things and "debating" with people.

Thus, she created the website Finding Middle Ground: A Safe Space To Discuss Civil Rights For All, which as of right now is just this video, featuring a young girl asking questions that could be Googled quite easily by her parents, were they willing to spend 15 minutes or so.

Interestingly, as part of her work with the ACLU, Dillard Smith has fought for the right of the Ku Klux Klan to adopt a highway, on the grounds that the government doesn't have the right to regulate freedom of speech like that. As much as I despise the KKK, I have to agree. And while seeing a sign on a road saying it was adopted by the KKK would be unnerving, while the KKK might be a difficult thing to explain to your kids, as abhorrent as they are, they still have rights. The KKK has committed real crimes against people, and I think most of us would find it more upsetting and, honestly, threatening, to see a Grand Dragon in full regalia, than to see a trans person minding their own business and going to the bathroom. But our laws are not designed to prevent people from ever seeing things that might upset them.

Hopefully, Dillard will use her time off to figure out how to use the Google machine and learn as much about trans rights as she can, and figuring out how to talk to her own children about stuff.