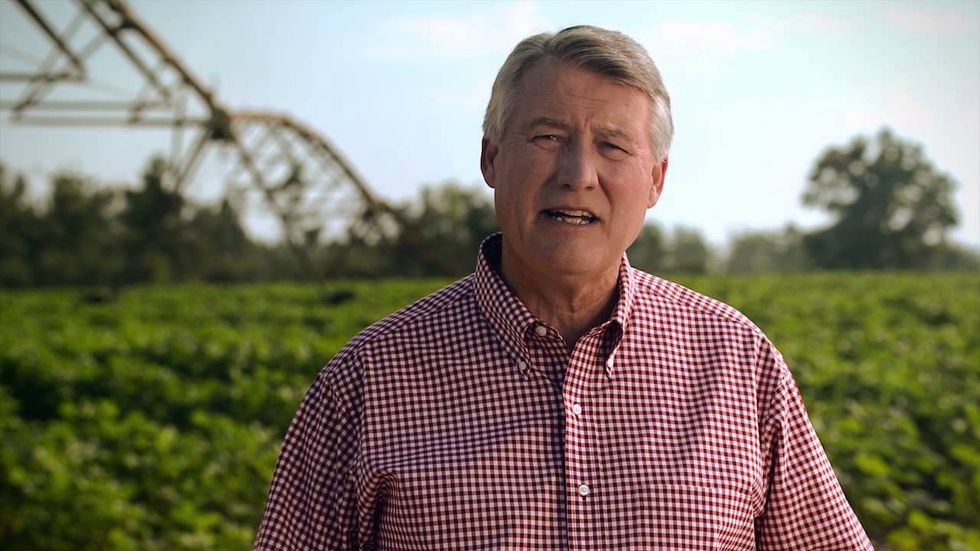 Last month, Georgia Congressman Rick W. Allen stood up during the House Republican Conference, prior to a floor vote on an amendment to an Energy-Water bill that would prevent government contractors from discriminating against LGBT employees, and read a bible verse about how gay people are evil and deserve death! Out loud, in front of people, like that is not a completely evil thing to do.

For this reason God gave them up to dishonorable passions. For their women exchanged natural relations for those that are contrary to nature; and the men likewise gave up natural relations with women and were consumed with passion for one another, men committing shameless acts with men and receiving in themselves the due penalty for their error.

And since they did not see fit to acknowledge God, God gave them up to a debased mind to do what ought not to be done.They were filled with all manner of unrighteousness, evil, covetousness, malice. They are full of envy, murder, strife, deceit, maliciousness. They are gossips, slanderers, haters of God, insolent, haughty, boastful, inventors of evil, disobedient to parents, foolish, faithless, heartless, ruthless. Though they know God's righteous decree that those who practice such things deserve to die, they not only do them but give approval to those who practice them.

For I testify unto every man that heareth the words of the prophecy of this book, If any man shall add unto these things, God shall add unto him the plagues that are written in this book:

Well, after the Orlando shooting, Rep. Allen said in an interview, "My wife and I, our prayers are with those family and friends ... The members of Congress who represent that district are just devastated.” Naturally, he did not acknowledge that the victims in this shooting were LGBT people, whose death he had just prayed for a few weeks ago.

When asked if he would like to perhaps take those prayers back, Rep. Allen did not back down, and says he stands by his decision to read those passages.

Allen, asked whether he felt the need to make any clarifying statements about his reading of the verses in light of the Orlando tragedy, said, “Well, I’m imperfect. And I consider that we are all imperfect and we all fall short of the glory of God, which is why we need a savior, by the way."

He said that he read the verse because he believes a nation founded on Judeo-Christian values needs to come together, and he does not condemn anyone. “I just simply shared that, in what’s supposed to be a private setting with fellow members of my conference, just like I would in a Bible study,” he said.

The Romans passage that he read discusses what types of penalties the Bible says should be applied to those who are not heterosexual.

Asked if he stands by his decision to read the verse, Allen said, "Yes. I read a scripture from Romans and that’s what I did."

OH, he's imperfect. He doesn't condemn anyone (except gay people, to death). He was just casually reading a Bible passage, about God killing gay people. And then some guy showed up at a gay nightclub and did just that! But he's praying for those people and their families.

How does that even work? How do you hold those two thoughts in your head at the same time? How do you go around reading Bible passages about how gay people should be killed, and then offer your sincerest condolences and thoughts and prayers when it actually happens? And how do you not say you are sorry? How do you not feel just a little bit like an asshole? I'm not religious, so I don't pray, but if I wished for someone's death and then they died I would feel like the worst person on earth, nevermind "imperfect."

I would almost respect him more if he came right out and said "No! This is fantastic! I've been hoping something like this would happen!" rather than offer his empty thoughts and prayers.

Think about this for a second! This guy is, he claims, deeply religious. He very likely believes that God is going to send all the people who died in that club straight to hell. But he believes he will go to heaven and be rewarded. What on earth is the point of a religion that rewards people for being cruel and punishes them for being themselves, and for loving someone? I'm not one of those atheists that's gonna tell a Christian they're doing Christianity wrong, but I will say that his particular interpretation of that religion teaches the wrong lessons altogether.