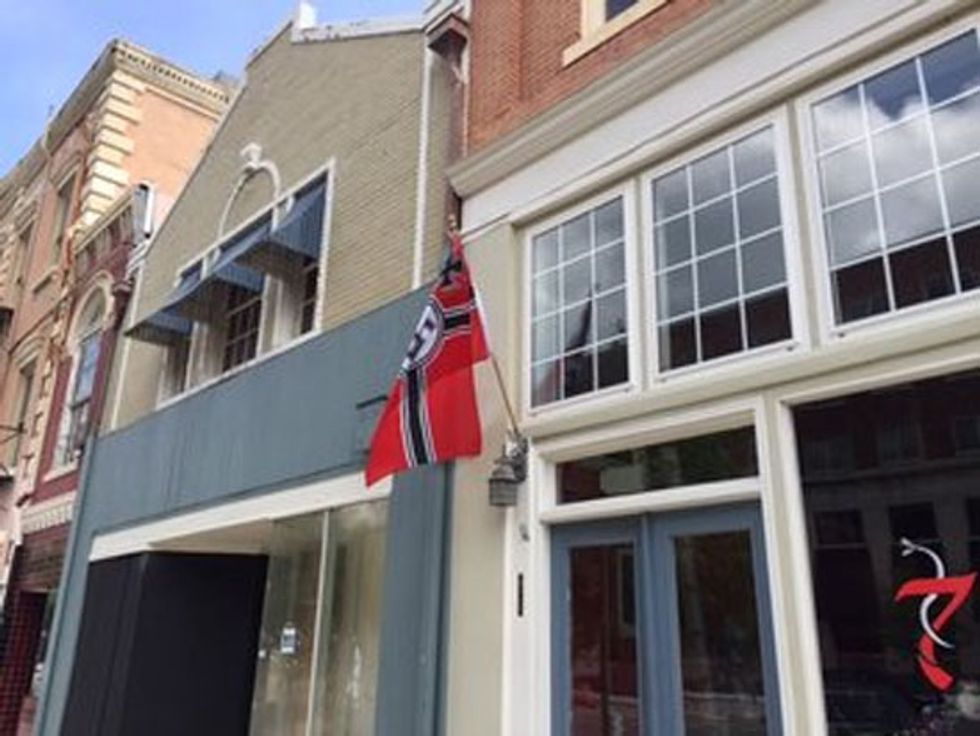 Why be so hung up on symbols? Or for that matter, hang up symbols?

A Macon, Georgia art gallery owner who had been flying a Confederate flag outside his business took the thing down Monday and replaced it with a WW II Nazi military flag, complete with swastika. Ah, but this is no mere gratuitous display of redneck defiance! Anthony Harris, owner of Seven on Second gallery, is either boldly challenging conventional assumptions about semiotic signification (no doubt in a Bakhtinian spirit of playful transgression or jouissance), or just being kind of a jerk.

Harris explained to Macon teevee station WXGA that symbols are only as powerful as you allow them to be, and that's why he's replaced the Confederate flag with the flag of the Kriegsmarine, the Nazi-era German navy:

Yr. Wonkette would note that, as of this date, we know of no one who has been killed because they were waving around a Confederate flag, but there was this one guy in June who was awfully intent on killing some people, and who also made a point of posing with a Confederate flag as a symbol of his impotent rage at his chosen racial enemies. He even wrote a manifesto about it, which is a bit like an artist's catalogue description of the bloody performance piece he presented in Charleston. We're thinking that maybe Harris may be just a little confused about the significance of Confederate symbolism in this whole "killing" thing. On the other hand, there was definitely a water bottle thrown at a pickup truck carrying the Confederate flag, so that's kind of like killing, or at least a semiotic Eco of it, maybe?

RawStory says that on the gallery's Facebook page -- which has since become "unavailable" -- Harris posted a whole bunch of pictures of himself with customers who bought Confederate flags, although who knows, maybe it was all just hipster irony:

Harris also reportedly posted photos of himself and customers posing in front of a flag with a black Celtic cross, another symbol beloved of the White Pride crowd, with the explanation:

This was last week’s flag at SEVEN -- The Celtic Cross, which has been co-opted by a skinhead group. No one complained an iota about this one. Two words: Media Propaganda.

Presumably this wasn't the version of the Celtic Cross used by Stormfront, with the "White Pride World Wide" slogan on it. Hey, it's just a symbol. Don't believe the hype. It doesn't appear that Harris has applied his iconoclastic approach to other mere symbols, like perhaps stomping on some consecrated communion hosts, wiping his tush with Old Glory, or immersing a crucifix in a jar of pee -- as far as we can tell, he just likes waving around symbols that happen to be associated with white supremacist groups.

You know, we're starting to think maybe this guy isn't a postmodernist at all. He might just be an asshole.