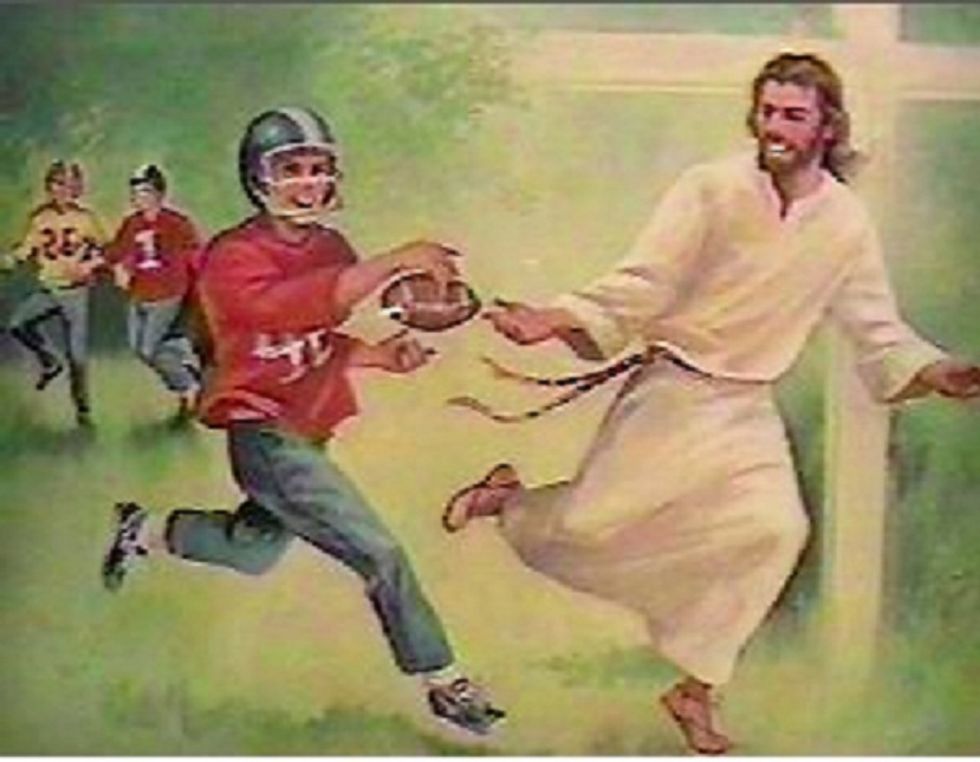 Residents of Villa Rica, Georgia, are astonished that anyone could have a problem with a group baptism of football players on school grounds before a recent F'ball practice. Because they love America, and Jebus, and F'ball -- which is why it made perfect sense to have the minister of First Baptist Church of Villa Rica kick off the season with some full-immersion baptizing on the football field, just like Jesus told us to do in the Constitution's Fourth Commandment: "Thou shalt keep holy the Lord's Day and watch F'Ball with the DirecTV Sunday Ticket." The practice came to light when the church posted a video to the YouTubes explaining how in this Georgia town, the atheistic ACLU holds no sway:

"We had the privilege of baptizing a bunch of football players and a coach on the field of Villa Rica High School! We did this right before practice! Take a look and see how God is STILL in our schools!" the caption with the video reads.

The video had been removed from the church's YouTube account by Tuesday, as the church apparently gave some thought to Matthew 6:5 and perhaps the Book Of Hourly Legal Fees.Atlanta TV station WXIA has the deets:

After a parent complained, the Freedom From Religion Foundation contacted Carroll County schools to advise them that the ceremony was a clearly unconstitutional religious ceremony on school property, and asked the school district to investigate and make sure it didn't happen again. FFRF spokeswoman Annie Laurie Gaylor told the TV station:

I can’t remember another case like this ... It’s really misusing the authority of the coach to promote his personal religious agenda.

[At the start of the video], they call it a step of obedience, and then the camera pans to the students ... It’s forcing them to undergo a religious ritual to be accepted on a team. How are they going to cross their coach? They have no choice. It’s proselytizing, it’s coercive, and it’s not legal in our schools

But ... but ... everybody WANTS to do it, and since when is America a place where one complaining parent can ruin Jesus F'ball for the whole community?

Pastor Kevin Williams, who opposes separation of church and F'ball, confirmed to the Associated Press that he had baptized 18 students and one coach on Aug. 17, but he's pretty certain that no establishment clause lines were crossed, because while the mass dunkings were held on school grounds, they were outside school hours, before the official start of F'ball practice, and completely voluntary.

Besides, getting baptized has obviously been good for the team, Williams explained:

"They're 0-2 this year, but you'd think they're 15-0 and already won the state championship. That's how they're acting," Williams said.

The school's only involvement was that the field is on school property, and "last time we checked, we the taxpayers paid for that field," the pastor added.

Oh, well hey, if it's owned by the taxpayers, that means it's NOT a government endorsement of religion, because majority Jesus rule and also apparently there are no spots at the First Baptist Church where people can go to get baptized. Also, too, since high school F'ball is itself a religion in the south, isn't mixing it with Christianity dangerously close to polytheism?

The school board issued a statement blandly stating that it is "currently looking into the specifics of this situation and will take appropriate steps to ensure all state and federal laws are followed." Presuming their lawyer is not A Idiot, that should be the end of the F'ball Baptisms, although there's always the chance that some brave students will follow a touchdown by grabbing a microphone and leading the crowd in the Lord's Prayer, which ought to be good for another five minutes on Fox News.