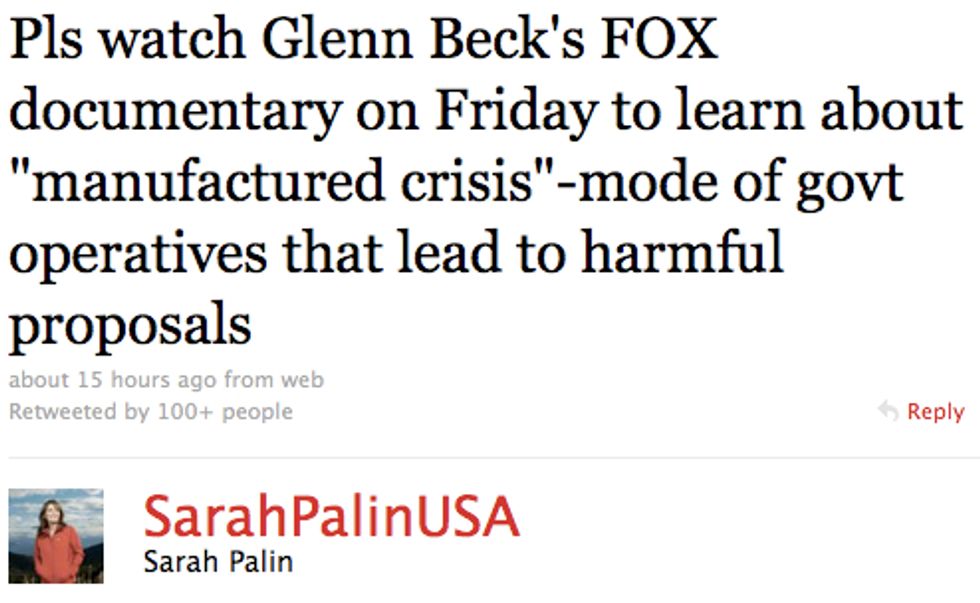 Hooray, a new television program will air on this day! Thanks for the heads-up, Sarah Palin on Twitter. We can't wait for what is certain to be a cool-headed analysis of government misinformation in the past and how things have changed. Glenn Beck, after all, is "the Errol Morris of our time." What's your new movie about, Glenn? And how did you arrive at thetitle, "THE REVOLUTIONARY HOLOCAUST"

A groundbreaking hour long special where Glenn Beck takes us back in time to examine the roots of socialism and communism and the evil that followed. We all know about the horrors of the holocaust where the pure evil Hitler inspired claimed the lives of millions of innocent people. But most do not know about the millions upon millions of lives lost in a different genocide of the Ukrainian people under the Stalin regime. This special also takes a look behind the iconic fashion symbol of Che Guevara showing that the myth doesn't tell the story of the man who was a blood thirsty killer. We meet a family who saw first hand what a monster the man was. They know the cost of communism and you will too when you hear their story, and who can forget about Mao Zedong? A leader responsible for 70-million deaths during his reign. All communist. All killers. We will show you things you've never seen but need to.

So... he re-made Pirates of the Caribbean 3 shot-for-shot? Nice try Glenn Beck. We all needed to see that, and so we did. LIKE FOUR YEARS AGO. DUH?

Thanks for helping the country, Glenn!