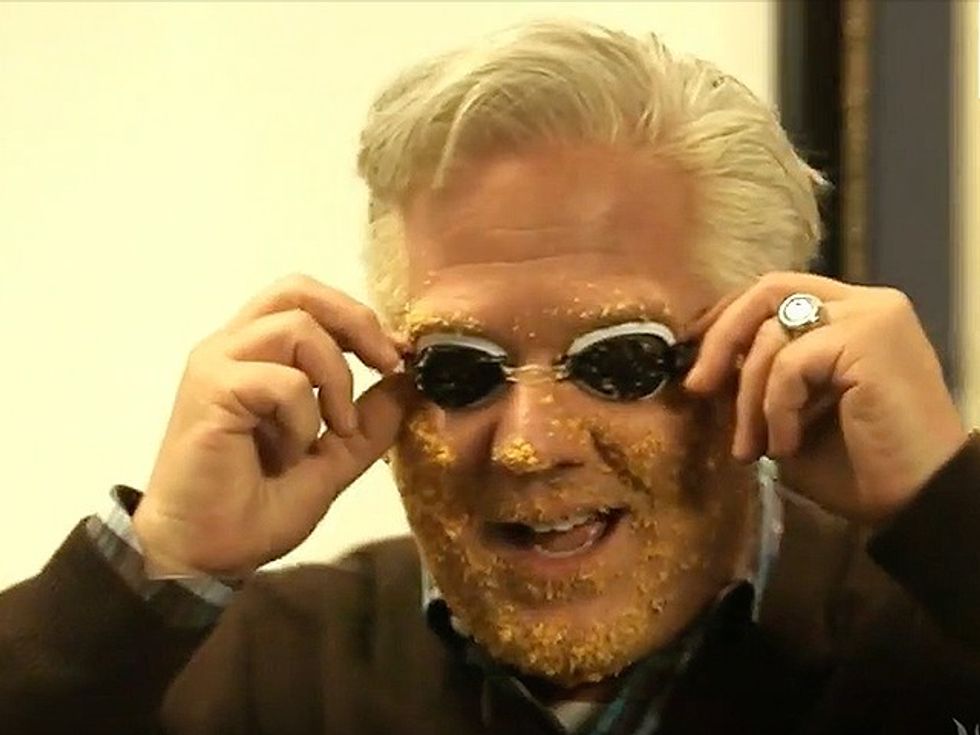 John Lewis, Glenn Beck is disappointed in you! On his internet teevee show today, Beck railed against the civil rights icon for having led House Democrats in a sit-in to demand a vote on gun control legislation.

Now, as we all know, Glenn Beck is a huge fan of Dr. Martin Luther King, Jr., with whom Lewis worked very closely. And who, by the way, died as a result of gun violence. Especially that one thing he said about how the best way to deal with racism is to pretend you are not complicit in it by saying you don't even see color. In fact, Beck once declared himself the NEW Martin Luther King, due to his tireless efforts to prevent gay people from getting married.

As far as John Lewis goes? Well, Beck says he thinks he's a hero for his participation in the civil rights movement!

But now, he says, while Lewis and others once fought for people to have rights, they are now sitting-in to take them away. Specifically the right for any person to have any kind of gun they want, with no regulation whatsoever! And that makes him a CLOWN. "He has become a clown," Beck said, "This has made these people, these civil rights leaders, into absolute clowns."

As a result of this, Glenn Beck is very sorry, but he must revoke Lewis's Civil Rights Leader Card, and bestow it upon himself and his viewers.

He will also, as it turns out, probably have to revoke Dr. King's Civil Rights Leader Card once he finds out about what he said after JFK was assassinated:

“By our readiness to allow arms to be purchased at will and fired at whim, by allowing our movie and television screens to teach our children that the hero is one who masters the art of shooting and the technique of killing, by allowing all these developments, we have created an atmosphere in which violence and hatred have become popular pastimes.”

Bummer! I guess Martin Luther King, Jr. ALSO hated "rights." Who is even left now? Basically just Glenn Beck and his viewers, which I guess means that black people across the country owe them a pretty big thank you right now!

Of course, outside of Glennbeckistan, merely fighting for "rights" does not a Civil Rights Leader make. Heck, those who opposed civil rights for black people in the 1960s absolutely believed they were fighting for their own rights. The "right" to not have to serve black people at their restaurants. "States rights." The "right" to keep their schools segregated. That did not make them Civil Rights Leaders, it made them assholes. Just like fighting against gun control, and for "gun rights" makes Glenn Beck an asshole.

Interestingly enough, by the by, Beck is not the only conservative to declare himself the new torch-bearer of Leftist ideals! On his podcast this week, Milo Yiannopoulos announced that conservatives like himself were the truly subversive and rebellious ones these days.

"None of my colleagues seem to understand this but those MAGA hats are doing for this generation what [Marilyn Manson album] Antichrist Superstar did for mine,” he explained.

“I have literally got more religious in the last four years since I have been on these college campuses reading about social justice warriors, feminists, Black Lives Matter, it’s pushed me to God, I’m serious, it really has.”

LOLOLOLOLOLOLOLOL. Oh Milo! You're a rebel and you'll never ever be any good. And Glenn Beck is a Civil Rights Leader, and I am Marie of Roumania.