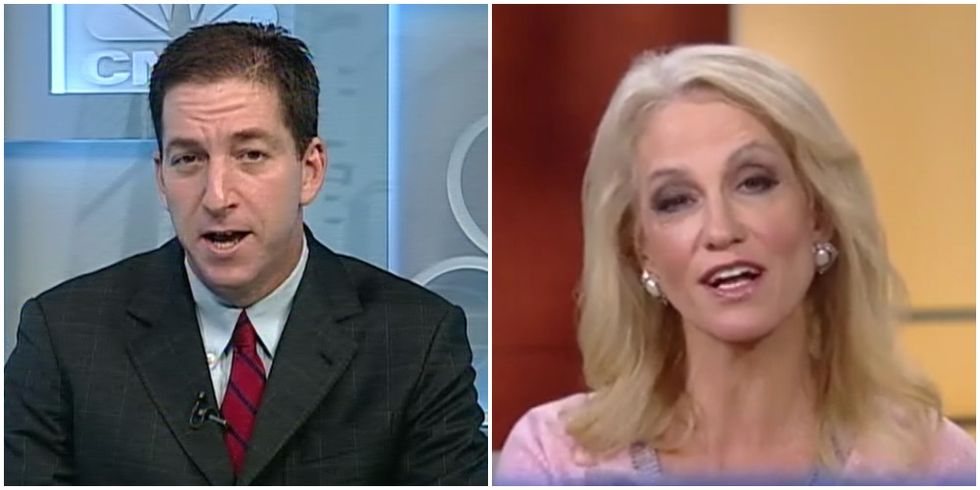 Glenn Greenwald and Kellyanne Conway, who ostensibly are not on the same side, but who are birds of a feather when it comes to soul-less hacks-manship, are not happy about the intelligence dossier on Donald Trump's mutually beneficial relationship with the Kremlin, which is also full of stories about Trump getting either peed on or at least catching some spray from the pee of Russian hookers, as he clapped his small hands together and his tiny boner peeked out of his ill-fitting suit pants, ALLEGEDLY.

Greewald and Conway are both like "UM AS IF" and saying things about how "PFFFFT this is fake, because the old spy who produced the intel didn't even sign his name or say who he got his information from." Let's remember that the guy who supplied this information is an old former MI6 guy, a person held in high esteem by the American intelligence community for producing good intelligence. Let's also remember that Old British Spy Guy is not the only source on this.

So, BEARING THAT IN MIND, the question, as we see it, is, are they both, in their own ways, actually part of the scandal, or are they, in fact, too fucking stupid to know what spies do for a living and how they work?

Here is what Glenn Greenwald had to say about it:

“An anonymous person, claiming to be an ex­British intel agent & working as a Dem oppo researcher, said anonymous people told him things,” wrote Glenn Greenwald, the journalist who was instrumental in publishing Edward Snowden’s leaks about government surveillance.

This, from the guy who thinks Julian Assange and Wikileaks do "vital" work, who acts totally lovey-dovey with Russia because of his boy Edward Snowden (despite how Putin is known for going after journalists and gays, both of which Greenwald is), and casts aspersions on anyone who would suggest that they leak things, sourced through actors whose names we do not know, for any but the noblest reasons.

Now, here's Kellyanne Conway, speaking to Seth Meyers, who is apparently one of our greatest journalists these days:

Without transcribing all of that (there's a lot going on today, kids, gonna need you to watch the videos, HEART YOU!), the key line from Kellyanne Conway is this:

Guess what hasn't happened, Seth? No one has sourced it. They are all unnamed, unspoken sources in the story. [...] Nothing has been confirmed.

NO, REALLY, DO THESE ASSHOLES NOT KNOW WHAT SPIES DO FOR A LIVING? The entire nature of spy-work is that people, often very covertly, cultivate sources, who Did Not Have The Conversation They Just Had, because if they actually had that conversation on the record, they probably would be killed dead by some government or another. Intelligence is an art, and it doesn't traffic in Christy told Jenna that Barbara was having a party but Heather is not invited, and here is the paper trail of birthday invitations that shows you with 100% certainty that it happened that way.

We think Glenn Greenwald and Kellyanne Conway know perfectly well what spies do, but are acting willfully stupid, because their allegiances are not to America. Conway's allegiance is to her bank account, and Greenwald's allegiance is to whatever the raccoons who live inside his brain are telling him to do that day.

Some perspective, from Paul Wood, Washington correspondent for the BBC:

The rumours or the allegations or whatever you want to call them have been circulating for a number of months now. I saw the report, compiled by the former British intelligence officer, back in October. [WONKETTE REPORTED ON IT NOVEMBER 1!] He is not, and this is the crucial thing, the only source for this. I was also told by a man I'll call a member of the US intelligence community back in August that he had been told, by the head of an East European intelligence service, that the Russians had kompromat or compromising material on Mr. Trump.

It's very, very difficult, of course, to talk to US intelligence people. They're breaking the law if they talk to you. But I did ask somebody with connections in the CIA to pass a message to them, and I got a message back that there was allegedly more than one tape, not just video, but audio as well, on more than one date, in more than one place, in both Moscow and St. Petersburg.

So no, the dossier isn't signed in pee by the MI6 guy or all his sources, because that's not how any of this works, but it's considered legit enough that the U.S. intelligence community is standing at attention, and so is much of Congress, from both parties.

We're just curious how much of this Greenwald and Conway already knew, considering his association with Wikileaks and her seat at Trump's feet. Maybe Conway has been kept in the cold, as she was brought in to replace Paul Manafort when he was pushed out of the Trump campaign (officially), on account of his ties with Russia.

Maybe the Trump team kept Conway clean, and she's really just an ignorant ass trying her damnedest to spin this. Or maybe she does know stuff, and she's just as much of a craven liar as her boss is.

As for Greenwald, meh, shut the fuck up.