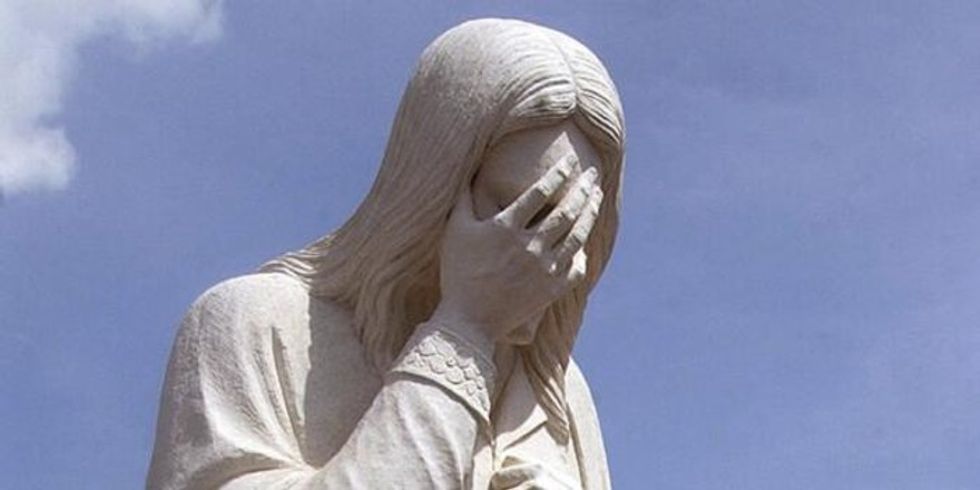 Father Forgive them, for these motherfuckers know not what they do.

America is still reeling from the racist violence in Charlottesville, a hurricane has thrashed Texas's coast to pieces, and there are wars and rumors of wars all across the world, so THANK JESUS CHRIST, PRINCE OF PEACE, that a bunch of the country's most prominent conservative evangelicals have come together to issue a bold proclamation called the Nashville Statement, a document that can concisely be summed up as, "Fuck those faggots, though, am I right?"

It's probably called the "Nashville Statement" because the signers huddled in the basement of some forgotten Cracker Barrel off the highway outside of Nashville and jotted down their hate words about the queers and the lezzies and the trans-sexicans. We are just fooling, it came out of the Council on Biblical Manhood and Womanhood meeting at the Southern Baptist Convention’s Ethics and Religious Liberty Commission conference (a VERY important meeting at a VERY important conference), which was held in Nashville.

Of course, it really shouldn't be called the "Nashville Statement," because that thriving, liberal Southern city ain't got time for NONE of this shit. Nashville Mayor Megan Barry tweeted her displeasure:

Anyway. This thing was signed by ALL THE ROCK STARS of the evangelical movement. A few you might recognize are James Dobson (founder of Focus on the Family), Tony Perkins (prez of the Family Research Council hate group), and Albert Mohler (prez of the Southern Baptist Theological Seminary). Oh, and Erick Erickson, the wingnut blogger! And David French from National Review!

If you were unfortunate enough to have been raised in the evangelical world, first of all, we're sorry about your therapy bills, but second, you might recognize names like John Piper, R.C. Sproul, J.I. Packer and Steve Gaines, the president of the Southern Baptist Convention and pastor of the Bellevue Baptist Church in Memphis. Prior to ascending on high to his current position, Gaines was perhaps best known for protecting child molesters in his church.

But none of that is important, because these are MEN OF GOD. And the occasional woman, on the rare occasion they let one in the room.

Forthwith, their proclamations about how Jesus Christ -- God's only son, who was crucified, dead and buried, and on the third day, rose again, defeating sin and death; who came to heal the sick, and who coined the phrase "let he among you without sin cast the first stone," because a bunch of fucking Pharisees were ANNOYING THE SHIT OUT OF HIM trying to make Him condemn a woman caught in the act of adultery -- is the original gay basher.

Articles 1 and 5 are about how God hates fags and God hates transgenders, respectively:

Article 6 is about how if you insist on being born with ambiguous genitals, we guess that's OK, so congratulations, intersex people, you are safe! (You are absolutely not safe with these people.)

Article 7 reminds us that God hates all the colors of the LGBT rainbow, in case you didn't get that in Articles 1 and 5:

Article 8 is made for the purpose of twisting the knife in the hearts of LGBT and questioning kids in the Church, scared and ashamed because they know who they're attracted to, and terrified God doesn't love them. Don't worry, though, kids! God can still love you, as long as you deny yourself human fulfillment and love and companionship and family and joy. Otherwise, you are so fucked:

If this statement were released a few years ago, there would have been a line in there about "HALLELUJAH PRAISE JESUS, for you fags can be cured of your insatiable obsession with dick if you just follow this Pray Away The Gay 12-step program," but the "ex-gay" industry kinda fell apart when all the one-time leaders of the movement were caught being gay naked with other gay nakeds, because their sexuality hadn't changed one bit. "Ex-gay" ministries and camps and finishing schools still exist, but they're gravely weakened these days. (FULL DISCLOSURE: Yr Wonkette, in a past life, had a hand in killing off that industry, through our work with Truth Wins Out, which was founded for that very purpose.)

Article 9 says your mom and dad and your greasy granny and your friends are all hellbound heathens too, if they love your sickening LGBT self:

Did they forget to mention that God hates transgender folk? Just in case, Article 13 is ON IT:

Jesus, what is wrong with these people? Even Pat Robertson's senile ass understands that transgender is a real thing.

And that's about it.

To any LGBT kids who see this and are hurt by it: Please know that you are good and wonderful and loved and that these assholes are 100 percent wrong. There are many, many churches out there (a growing number, in fact!) that aren't so filled with hate that they cling to bad interpretations of Scripture that do not remotely say God hates or condemns LGBT people. (Kids, those links go to good books, that you can buy!)

To the signatories of the Nashville Statement: You know that verse in Matthew that says, "Then I will tell them plainly, 'I never knew you. Away from me, you evildoers!'"? It's about you. So to go to hell and stub your big toes all the way there, please and thank you.

Wonkette salaries are fully paid by loving souls like you! If you love us, click below to fund us!