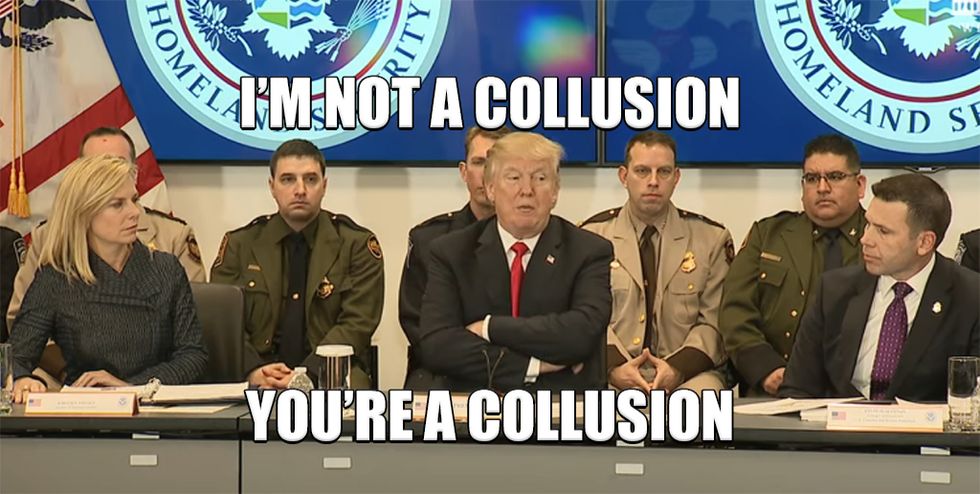 Morning Wonketariat! Here's some of the things we may be talking about today, but first, HEY LONG BEACH, CA! Come have beer and pizza with Editrix at Buono's Pizza at 250 W. Ocean Blvd. from 7-9 p.m. TONIGHT!

Over the weekend a number of Republicans started walking away from THE MEMO after seeing the Devin Nunes Story Time Spectacular was just another crappy spin-off of The Washington Apprentice.

Back in 2013, around the same time he started working hard for the rubles, "idiot" Carter Page wrote a letter to an academic journal boasting he was an "advisor" to the Kremlin -- two months after being warned by the FBI that he was talking to Russian spies.

A bunch of geeks have released reports detailing how "#ReleaseTheMemo" was started by "alt-right" wingnuts watching freshman Rep. Matt Gaetz lose his shit on teevee, then it got picked up and spammed by known Russian bots and disinformation agents.

In a new career low, somebody called Sebastian Gorka a traitor on on C-SPAN yesterday, forcing Gorka to dodge accusations that he's a racist tool of the Russian kleptocracy.

Senators John McCain and Chris Coons want to introduce a DACA bill that would create a pathway to citizenship for kids who've been in the US since 2013, while studying whether or not additional border security is needed. Also notable: It denies money for Trump's wall. [Archive]

The push to "You're Fired" federal workers deemed "not loyal" to the Trump administration was touted during Trump's SOTU address, but new data has found most fired federal workers are veterans with service related disabilities making less than $30,000 a year. I guess loyalty is more expensive than the price of freedom.

A number of Democratic senators are calling "bullshit" on the so-called "bloody nose" strategy being pushed by war hawks in Trump's White House, citing some nonsense about constitutional obligations and "congressional authority." PFFF, hippies.

Paul Ryan was lubing his crank with the tears of the poor and accidentally tweeted about a woman who saved $1.50 a week thanks to the Trump tax cuts (for the super rich).

One of the biggest DC lobbying firms forgave ex-con and former Congressman Michael Grimm's $421,788 debt. Grimm's spox (who is also an OG Trump spox) Michael Caputo noted that everything was totally legit, legal, and not at all sketchy. Then he threatened to throw everyone off the balcony and break them in half like a boy.

The Trump administration has pulled the nomination for Kathleen Hartnett White (AGAIN) to head the Council on Environmental Quality. Hartnett, a climate change denier, famously noted she was "not a scientist," causing the collective scientific community to scoff, "No shit."

A third party accounting firm concluded an internal audit on the Pentagon and found the Defense Logistics Agency lost more than $800 million Ameros, noting the Pentagon is so flush with cash that it can't keep track of where money goes. Maybe if we give them more money they can find the money they lost?

GOOD NEWS! After being forced to warn soldiers about the "dangers" of vaping synthetic cannabinoid (CBD) oil, military health officials are clarifying that nobody has died from getting super-duper stoned on CBD oil.

Once again SCOTUS is set to decide the outcome of elections due to the number of gerrymandering cases being sent up the legal food chain.

Republicans are starting to worry now that more than 80 Democrats have at least $250,000 in cash on hand for 2018 midterms, with 40 candidates outraising incumbent Republicans in the last quarter of 2017.

California's electoral politics are taking a hard left turn as candidates up and down the ballot test just how far they can go in the State of the Resistance.

Illinois Republicans are about to nominate an outspoken anti-Semite for the House after no other Republicans bothered to run in Illinois's 3rd Congressional District.

An Indiana man is suing to recover lost wages after he was forced to go to court for giving a state trooper the finger for driving like a pissed off teenager; and he's not alone.

ICE arrested a chemistry professor from Bangladesh in his front yard while taking his daughter to school. Apparently he's one of the "bad hombres" from Not America subverting our children with science.

A paramilitary Ukrainian nationalist group has been terrorizing people with their Nazi sympathies ahead of next year's presidential election, a charge the militants deny since they don't wear silly hats or arm bands.

Russia says that if the US implements any new sanctions the Kremlin will issue its own sanctions, with blackjack, and pee hookers, and Little Green Men.

As the IS/ISIL/Daesh/whatever are beaten into obscurity across the Middle East, they're burning oil fields and poisoning what fertile soil exists in the desert, creating environmental disasters that could last for years.

We're 100% ad-free and reader supported, so give us money for coffee and cold medicine!