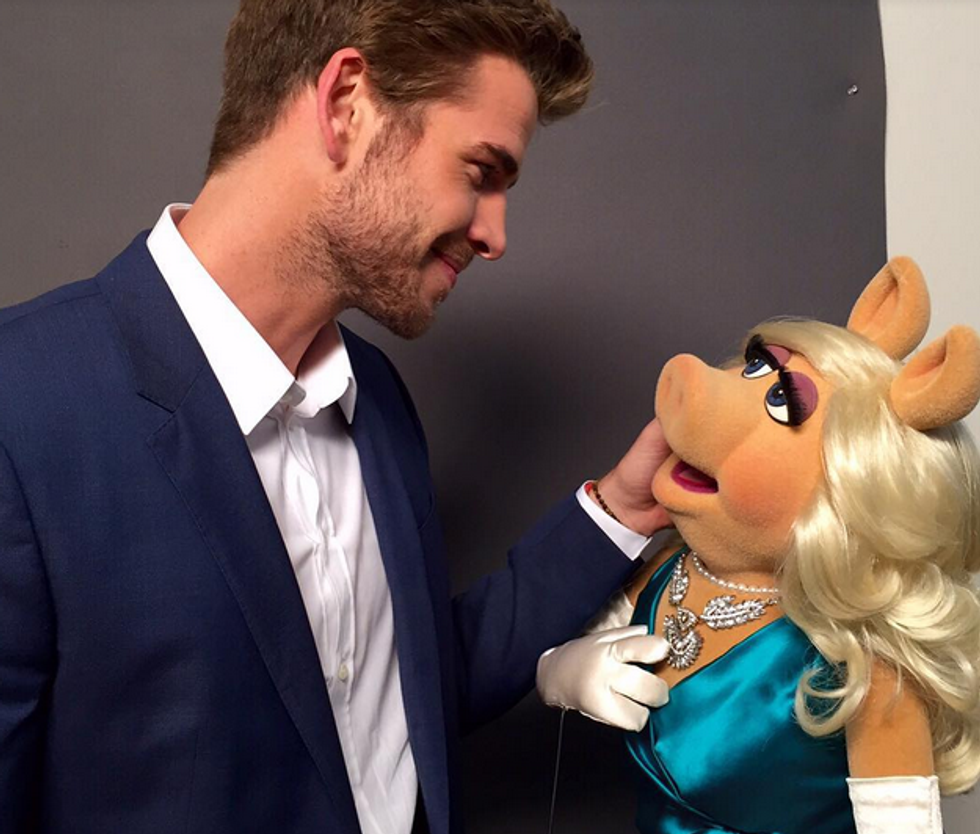 It's been a while since yr Wonkette has checked in with the "One Million Moms" group (77,000 Facebook fans and counting!), and its fearless leader, the halfwit Never-Nude Monica Cole. Hi, Monica!

This is Monica. She is professionally aggrieved.

If you don't remember, "One Million Moms" is the Girl Section of the American Family Association hate group, and it basically consists of Cole watching television and having a conniption every time something on TV reminds her of shame-sex and nipples. Like that "Lucifer" TV show, and Radio Shack ads, and Graham cracker ads. Oh and one time, the Moms got an angry thrill in their pants over the "bestiality" depicted in a GEICO ad featuring a talking pig.

What's Monica upset about this time? Pig-fucking again, of course. Because see, there is a new Muppets program, and it's being marketed as a more growned-up version of the old "Muppet Show," which was honestly pretty growned-up to begin with. Oh yeah, it was full of gags for the kiddies, but it was a pioneer in the art of hiding little jokes that go straight over the kids' heads, so the adults in the room aren't completely bored with having to watch dumb children's programming.

Anyway, Monica Cole, did you see a nipple on a Jim Henson puppet? Did it make you feel like Beelzebub was tugging at your britches? Did Miss Piggy get laid harder in the promo for the new show than you have any time in your entire life? Did the images of Miss Piggy getting jiggy lead you into temptation, instead of delivering you from evil?

"It's sort of an adult Muppet show," Kermit the Frog said during a promotional video for the show. One ad read, "Finally, a network TV show with full frontal nudity." Technically, the advertisement is correct – seeing how Kermit doesn't wear pants.

Monica went to her computer and writed down "frog penis" on her list of "Muppet Show complaints." Then she got a Devil chill and walked back to the couch and watched more of the promo:

The mature version of "The Muppets" will cover a range of topics from sex to drugs. Miss Piggy came out as a pro-choice feminist during an MSNBC interview. The puppet characters loved by kids in the 1970s and 1980s and beyond are now weighing in on abortion and promiscuity.

Yeah, well, Miss Piggy's got a reputation to uphold. She ain't got no time to chase around little frog-pig hybrid babies. Monica Cole might have time, but Miss Piggy is BUSY. (She probably doesn't have to worry about it anyway. Miss Piggy and Kermit broke up, and she has a new boyfriend, human man Josh Groban, so unless Miss Piggy's pulling some Kim Davis "I'm preggers with my last husband's litter of pig tadpoles!" shit, then she's in the clear. Don't worry about Kermit either. He has a new lady-pig named "Denise.")

Here's the promo for the new show. It looks fun, and yeah, definitely geared toward adults. Miss Piggy plays mouthy tonsil sex hockey with Topher Grace in it. Shield your eyes, One Million Moms!

Anyway, Cole needs to take a pill (but not a birth control pill, those are from Satan!) and chill out. This show is obviously being marketed to all those of us who are A CERTAIN AGE, who grew up on the Muppets. And if the kids watch it, meh, they won't get the grown-up jokes.

And as always, Cole and her "one million" friends are invited to remember that the world does not exist to cater to the needs and desires of whiny-ass fundamentalist Christian assholes who really aren't the target audience for "the arts" anyway. Turn the fuckin' TV off  and we dunno, get a job or something. Will your husbands allow that? Meh, not our problem.