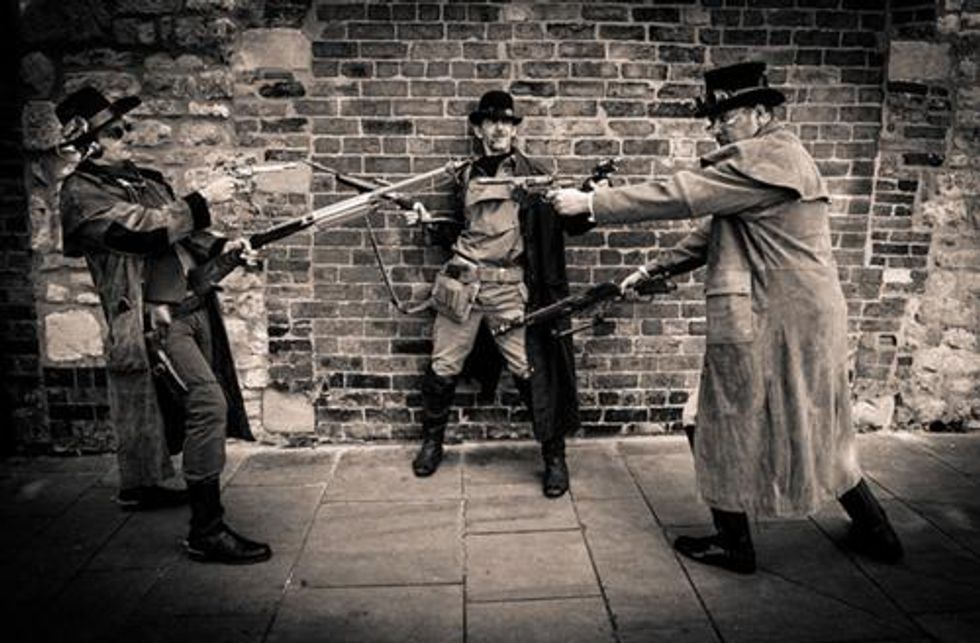 In a development thatno one could have predicted, the first day of Georgia's exciting new "Guns Everywhere" law was celebrated with an armed encounter between two open-carrying gentlemen in a convenience store. Happily, since An Armed Society Is A Polite Society, the incident didn't actually escalate to gunplay, proving that there's definitely nothing to worry about, ever.

The Valdosta Daily Times explained it was all just a little "misunderstanding," one of those things that just happens now and then, like accidentally reaching for the wrong shopping cart (which you can now shoot someone for if you believe he or she is going to attack you with your own shopping cart). What happened was that Responsible Gun Owner Ronald Williams, 62, was in the convenience store when a second Responsible Gun Owner, name not mentioned, came into the store. Both men had holstered shootin' irons on their hips. Williams, perhaps itching to know whether he was facing a Responsible Gun Owner or a Bad Guy With a Gun, then unholstered his gun and demanded that the second gentleman show him some identification and a permit for that there gun. It should be noted that Williams did not point his gun at the second man, because Polite Society.

The second man, who Knows His Rights, replied that he didn't have to show Williams no steenking permits or ID, left the store, and called the police, who came and arrested Williams and charged him with being a big pussy liberal who wants to take away our precious 2nd Amendment rights, or at least with disorderly conduct, because apparently drawing a gun inside a convenience store is still illegal in Georgia, if you can believe that!

Valdosta Police Chief Brian Childress explained that in this particular case, the Second Responsible Gun Owner was in the right, and that Mr. Williams had committed a bit of a Responsible Gun Owner faux pas, because Polite Society or not, the new gun law actually prohibits anyone from asking anyone to show a firearms permit. This especially applies to law enforcement, since any fool knows that being able to ask to see a permit is the first step on the road towards tyranny. If police think someone may be a Bad Guy, they have to wait until the gunsel actually aims at them or a civilian, and then hope that their fast draw is pretty good. You know, just like the Founders intended. It is unclear whether Mr. Williams is now a Bad Guy with a Gun, or a Good Guy With a Gun, but just a bit confused. We bet if the second gentleman had shot Williams just to be sure, he'd have had a pretty good 'stand your ground' defense, because that was probably scary! Remember, always shout "I am in fear for my life!" while shooting people. In any case, Chief Childress said that people should keep their powder dry and no go off half-cocked if they want to be straight shooters:

“This is an example of my concern with the new gun law that people will take the law into their own hands which we will not tolerate,” Childress said.

We look forward to further illuminating lessons on Armed Etiquette, and anticipate that apart from a few misfires here and there due to "misunderstandings," Georgia will soon be the most polite state in our great nation.

Follow Doktor Zoom on Twitter. He promises not to draw on you, but can't guarantee that he won't do a clumsy photoshop job.