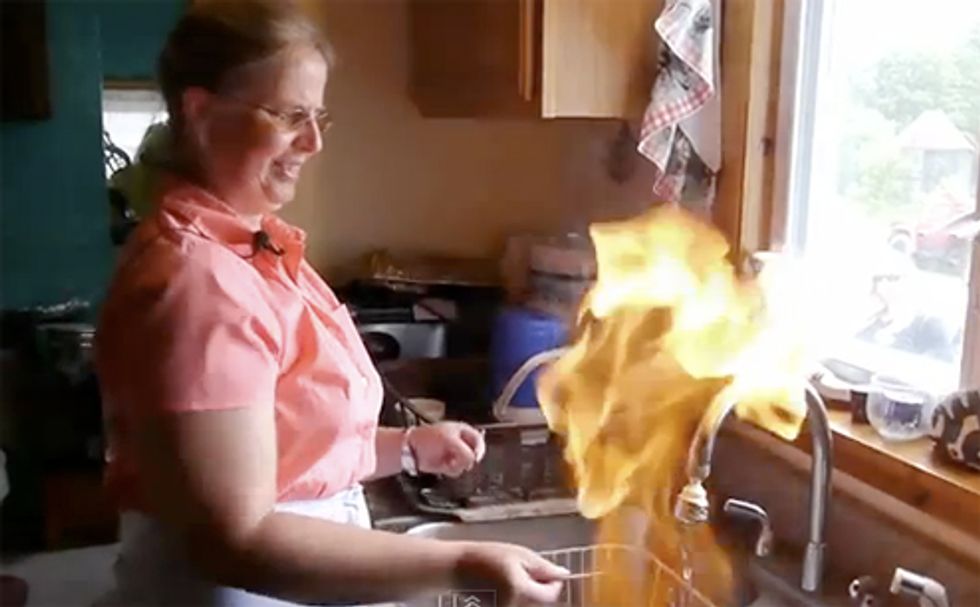 This story sponsored by a grant from the Patty Dumpling Fund for coverage of oil spills, fracking, and eew don't drink that fracking fluid you don't know what's in it!

Terrific news, corporate America! As the Wall Street Journal giddily announces, a new draft EPA study finds that hydraulic fracturing has had no "widespread, systemic impact on drinking water." Time to drill, baby drill! Except that the actual report is a lot more cautious and sciencey than that, noting that while the agency's review of scientific literature does find that there's no widespread contamination of drinking water, there are indeed instances where drinking water has been contaminated, although the "number of identified cases ... was small compared to the number of hydraulically fractured wells." The study, like any good science paper, also identified several potential problems with its own methods that suggest caution before we all announce, "Whoopee, even the EPA says fracking's harmless!" -- a phrase you should expect to hear on Fox News and in internet comments from now until forever.

The paper cautions that its finding of relatively few incidents of contamination "could reflect a rarity of effects on drinking water resources, but may also be due to other limiting factors," particularly "insufficient pre-and post-fracturing data on water resources" -- as Inside Climate News points out, a major shortcoming of the study is the EPA's reliance on oil and gas companies to provide data for what groundwater was like before fracking began:

For the study's findings to be definitive, the EPA needed prospective, or baseline, studies. Scientists consider prospective water studies essential because they provide chemical snapshots of water immediately before and after fracking and then for a year or two afterward. This would be the most reliable way to determine whether oil and gas development contaminates surface water and nearby aquifers, and the findings could highlight industry practices that protect water. In other studies that found toxic chemicals or hydrocarbons in water wells, the industry argued that the substances were present before oil and gas development began.

Unfortunately, the EPA had no way to compel the industry to provide that baseline data, and so they got bupkis. Or as the draft report puts it, the conclusions may be limited by "the inaccessibility of some information on hydraulic fracturing activities and potential impacts." We're not sue whether the oil companies may have also tried to buy the EPA off with free pizza, the way Chevron compensated locals when a Pennsylvania well exploded.

The study also identifies several potential concerns with fracking and the drinking water supply, including:

water withdrawals in times of, or in areas with, low water availability; spills of hydraulic fracturing fluids and produced water; fracturing directly into underground drinking water resources; below ground migration of liquids and gases; and inadequate treatment and discharge of water.

Also, it found that in southern and western Texas, the combination of "hydraulic fracturing water use, low water availability, drought, and reliance on declining ground water" could "potentially affect the quality of drinking water resources" in certain areas. The study also warned that poor well design or construction has, in some locations, resulted in localized contamination of water, citing the example of a well blowout in North Dakota and "movement of natural gas into local drinking water aquifers" in Ohio. Older wells that weren't built with fracking in mind may also be more subject to leak. Not that the industry would ever even think of pumping high-pressure fluid into potentially leaky wells, oh goodness no. Besides, flammable water is normal, according to some loony guy in Colorado.

It's also worth noting that the study focuses only on potential contamination of drinking water, and explicitly leaves out a whole range of other concerns about fracking, such as emissions of hydrocarbons and other chemicals into the air and the potential for causing earthquakes, or "worker health or safety." It also wishes to CAREFULLY remind us that it is "not a human health risk assessment" either. Most importantly, the report doesn't address the biggest problem with fracking: the more gas and oil we pump and use, the more CO2 we add to the atmosphere, increasing the greenhouse effect and global warming. So even if fracking can be carried out without too much risk of poisoning our aquifers, the end result of all the fossil fuels obtained by fracking will merely add to making the planet unlivable. Yay, we're not too likely to be poisoned but the Midwest is becoming a desert.

That's a bit of a downside, maybe.

WSJ article behind a paywall? Just google the title, "Fracking Has Had No ‘Widespread’ Impact on Drinking Water, EPA Finds" and you can read it in full.