Goodbye, Kevin Williamson! You Are Fired From The Atlantic Now! Goodbye! 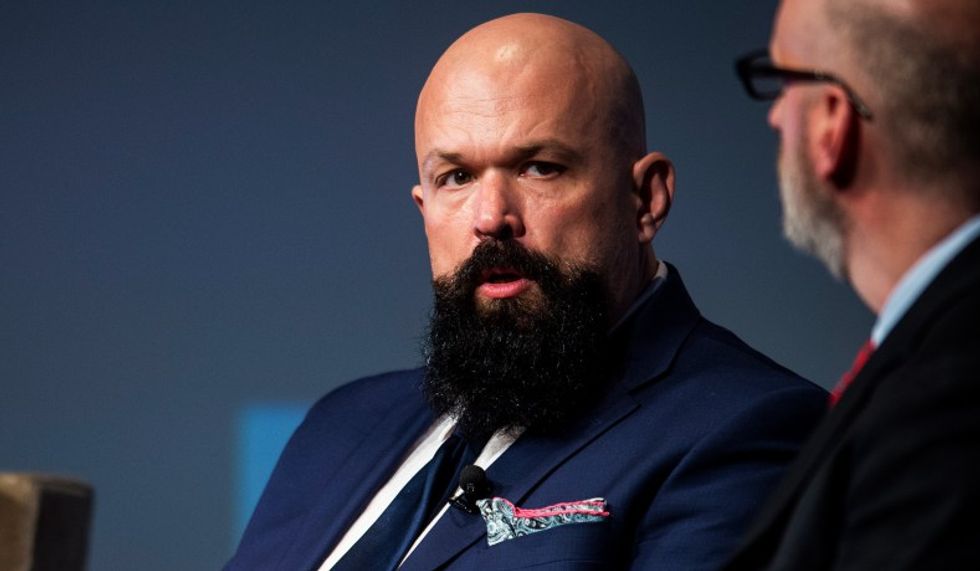 Last month, The Atlantic hired former National Review writer Kevin Williamson as an op-ed contributor. This caused quite a kerfuffle in Medialand, on account of how Williamson had once tweeted about how he would like to see people who have abortions get hanged:

Feminists across the internet shouted, "Hey, this is actually an extremely terrifying thing to say! Maybe don't hire this man as a professional opinion-haver!," while Atlantic EIC Jeffrey Goldberg was all "Whatever, it was ONE TWEET, it is NOT a big deal!" And then the New York Times's Bret Stephens wrote a whole essay all about how all the mean feminists were figuratively assassinating poor Kevin Williamson over ONE TWEET in which he was literally advocating murdering us over ONE ABORTION.

You know, because we all make mistakes. Sometimes you just slip and fall and accidentally tweet about how much you would enjoy seeing nearly a third of the women in this country hanged, which is a form of capital punishment we don't even do anymore. As Stephens points out, it wasn't like he wrote a whole book about it!

No, he didn't. He did, however, do whole a podcast on it. Whoops!

As it turns out, Williamson elaborated on this position in a 2014 episode of his National Review podcast, which was for real titled “Mad Dogs and Englishmen.”

KEVIN WILLIAMSON (CO-HOST): And someone challenged me on my views on abortion, saying, “If you really thought it was a crime you would support things like life in prison, no parole, for treating it as a homicide.” And I do support that, in fact, as I wrote, what I had in mind was hanging.

WILLIAMSON: My broader point here is, of course, that I am a -- as you know I’m kind of squishy on capital punishment in general -- but that I’m absolutely willing to see abortion treated like a regular homicide under the criminal code, sure.

Later in the podcast, Williamson explained that while he's not that into capital punishment, he figures if we're going to do it, we should go big or go home. With hanging:

But yeah, so when I was talking about, I would totally go with treating it like any other crime up to and including hanging -- which kind of, as I said, I’m kind of squishy about capital punishment in general, but I’ve got a soft spot for hanging as a form of capital punishment. I tend to think that things like lethal injection are a little too antiseptic.

Now, Williamson has (finally) been fired from The Atlantic, on account of how Jeffrey Goldberg suddenly realizes that this was not simply a one-time impulsive dalliance. In a memo to staffers, Goldberg wrote:

Late yesterday afternoon, information came to our attention that has caused us to reconsider this relationship. Specifically, the subject of one of Kevin’s most controversial tweets was also a centerpiece of a podcast discussion in which Kevin explained his views on the subject of the death penalty and abortion. The language he used in this podcast—and in my conversations with him in recent days—made it clear that the original tweet did, in fact, represent his carefully considered views. The tweet was not merely an impulsive, decontextualized, heat-of-the-moment post, as Kevin had explained it. Furthermore, the language used in the podcast was callous and violent. This runs contrary to The Atlantic’s tradition of respectful, well-reasoned debate, and to the values of our workplace.

Yeah. Um. We tried to tell you, Jeffrey. There's whimsy, and then there's "Hey! Let's hang 600,000 people a year!" and they are two very, very different things.

As glad as I am to see Williamson go, it's a little bit infuriating that saying this one time wasn't bad enough. We have all said things in anger, but even if this were an "impulsive, decontextualized, heat-of-the-moment post," the well you go to when you're angry matters. If you go right to the mass hangings well, that says something about you, as a human being. It's also not really a thing you say out loud, or on Twitter, unless you really, really believe it. It is a very severe thing. I knew that. Every other person who was furious about Williamson's hiring knew that.

Why was it so hard for Jeffrey Goldberg to see this? Did his inability to get pregnant himself impede his ability to understand why those of us who can might take a statement like this pretty seriously? Is empathy for this kind of thing really that difficult to come by?