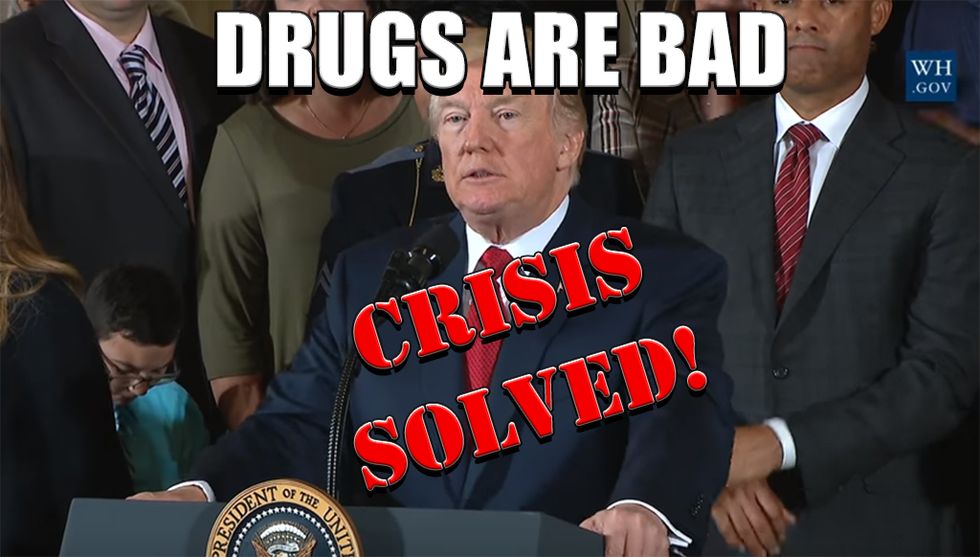 Happy Friday, Wonketariat! If you are a Los Angeles person, Rebecca hopes to see you TONIGHT at Red Lion Tavern in Silverlake, 7-9 p.m.! We have many so many spooky newses to tell you about! But first, have some SPOOOKY naked moles rats in a pumpkin!

Even though House Republicans squeaked their budget measure through, setting the stage for the Trump tax cuts (for the super rich only), dissent among the ranks runs deep as silver-tongued corporate lobbyists descend upon the Hill.

Even though we still don't have a financial report, Republicans are hoping to close Uncle Sam's coin purse in order to kill the Trump-Russia investigation.

You better believe the conspiracy cranks are going to go nuts when they find out that top Democrats didn't know who was funding THE DOSSIER.

The FBI has finally caved and will give the House Select Committee on Intelligence some info on THE DOSSIER, so it's only a matter of time before Trey Gowdy screams about that time Hillary Clinton peed on a uranium email in Benghazi.

Mitch McConnell is gearing up to steamroll judicial nominees, and they're using all sorts of dirty tricks to slut-shame Democrats into supporting crappy candidates, like letting Jeff Sessions throw temper tantrums.

The Twitterati is losing its hivemind after Trump decided to delay the release of a bunch of documents about the assassination of JFK. DEEP STATE!

On the next episode of the Washington Apprentice, the finalists for Fed Chairman will square off in an Oval Office showdown. We're crossing our fingers for a Klingon bat'leth battle.

How many days has Betsy DeVos been doling out hand jobs to private Jesus-freak and charter schools since becoming Trump's Secretary of Education? The correct answers is 326.

The Government Accountability Office is smelling something rotten in Trump's voter fraud commission, so they're opening an investigation due to its lack of transparency.

OF COURSE the Trump administration is going to dole out fat stacks of cash to Tea Party crazies that came under the microscope of the IRS during the Obama administration. Why wouldn't they apologize for investigating shady super rich mega donors dumping obscene amounts of cash into bullshit Super PACs.

People are bemoaning the lack of free speech in colleges, and now the hate mongers and conspiracy cranks are stumbling out of their secluded shanties to whine about being denied a debate on white nationalism.

You may be wondering where your congress critter stands on bump stocks, so here's an infographic to share with your friends.

Congress is going to vote on CHIP, but Republicans are dragging their feet; we can only assume they're not thinking about the children.

Shortly after a lawsuit was filed by Georgia election reform advocates seeking to axe the state's ancient and hackable voting system, computer server data was deleted by technicians at the Center for Elections Systems at Kennesaw State University, which is conveniently controlled by Georgia's secretary of state and Republican gubernatorial candidate, Brian Kemp. Now we'll never know if John Ossoff got screwed!

When a Chinese dissident living in exile was discovered to be a Mar-a-Lago member, Trump gave him a "Get Out Of Messican Jail Free" card -- now he's being attacked by Twitter bots hell bent on portraying him as a bad hombre.

Despite all the warnings, Twitter's privacy policy mandates the company delete user data to protect its users, and that's a big goddamn problem for ferreting out Russian trolls.

During the Montana special election between Rob Quist and Greg Gianforte, it was hard as hell to Google some quick answers about any candidate other than Greg Gianforte. HUH.

Trump is tweeting this morning about that multi-million dollar ad campaign calling for his impeachment. SAD.

Sebastian Gorka equated Hillary Clinton to the Rosenbergs, saying that she is guilty of treason, and suggested that she be given "the chair." We're confidant that this Eurotrash Mirror Spock in a bad Kissinger costume knows all about treason.

It's time to change the laws for congressional employees in sexual harassment complaints. There's no joke here; it's bullshit when victims are legally discouraged to come forward, forced to undergo counseling and evaluation.

GAME CHANGE, y'all! More women are coming forward to accuse Mark Halperin of sexual harassment, and his career is in a death spiral. Good.

Tucker Carlson had a REALLY bad show last night. First he ranted in defense of Mark Halperin, insisting the names of sexual assault accusers be made public, only to then have California Democratic Rep. Brad Sherman derail not only his Trump taxes segment, but his Killary nukes segment.

Ad-free is the way to be, but we need your help (and money) to stay that way!