GOP: Give Us Your Tired And Your Poor And Your Jesus-Lovers Only 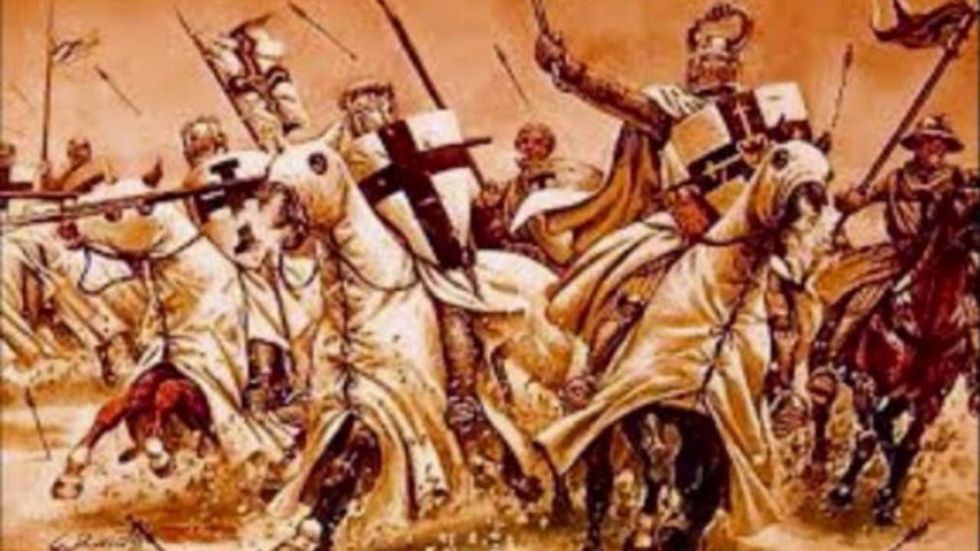 Don't you just hate religious radicals who think their god is the best god and everyone else should go away, convert, or die in a fire? They're always trying to wipe out the unbelievers, murder the heathens even in their places of worship, and scream incoherent nonsense in the name of their lord. The worst, right?

With million of Syrians -- about half of them children -- trying to escape the radicals in their own country, America's radicals have a nifty way to teach 'em the true meaning of American Exceptionalism: You are not welcome in America, except for if you love Jesus. Please "for example" us, Jeb Bush:

There are a lot of Christians in Syria that have no place now. They'll be either executed or imprisoned, either by Assad or by ISIS. I think we should focus our efforts, as it relates to the refugees, on Christians that are being slaughtered.

This isn't the first time Bush has said we should accept "every Christian Iraqi and every Christian Syrian" whose lives are threatened by "Islamic terrorism." But how can we tell which refugees are the Christian kind, and which are the faking secret ISIS wanna-destroy-America-with-their-radical-Islam kind?

Well, we do that all the time. It takes almost a year for a refugee to be processed into the United States.

Ah, so we are capable of screening refugees to ensure Jesus is just all right with them, but gosh dang it to heck if we can screen for the non-terrorist Muslim refugees. And of course none of them would ever pretend to be Christian to sneak into America, although you know how those crafty Muslims are, pretending to believe theirs is a religion of peace, when really they are just joshing us and coming to kill us all. Not that this is about religion, mind you:

This is not a question of religion. This is a political ideology that has co-opted a religion.

So to clarify Bush's position: The war on radical Islamic terrorism is not about religion, even though it's SUPER important to describe it as "Islamic" terrorism (ahem, HITLERY O'BUMMERTON), but we should concentrate on the Christians being slaughtered by a radical ideology because do we really care about Muslims being slaughtered? Is that why Jesus died for our sins and our Constitution? Nah.

Canadian Ted Cruz, who has unapologetically declared that he is running for president of the United States of Jesus and that only devout Christians are "fit to be commander-in-chief of this country," also doesn't want any dirty terrorist refugees stink-bombing his adopted country of America. Except for the Christian kind because everyone knows all Christians are harmless, by virtue of being Christian:

"There is no meaningful risk of Christians committing acts of terror. If there were a group of radical Christians pledging to murder anyone who had a different religious view than they, we would have a different national security situation," Cruz (R-Tex.) told reporters in a middle school gym here.

We'd like to invite the senator to spend a minute or two on the Google to read up on radical Christian Americans who have murdered doctors in the name of their religious beliefs. If he's got another minute to spare, he could review that study from July of this year that found white rightwing terrorists have been far deadlier than jihadists since 9/11. And if he happens to experience a flight delay while he's campaign-jetting around America, speaking about the horrible "persecution" of Christians bakers and florists who hate gaysexuals, he might want to check out the history of Christian terrorism and violence around the world.

He could start with the Crusades, if he were so inclined, or the Spanish Inquisition. There's always this more recent gem that has stuck in our brains since we first read it in high school:

New industries develop special skills, and the [Nazi] concentration camp industry was no exception. Adept Sonderkommandos learned to apply grappling hooks with skill to separate the bodies. Trained technicians learned to pry dead lips apart and deftly knock out gold-filled teeth. Talented barbers dexterously shaved the heads of dead women. Six days a week, the new elite worked in the concentration camps. On Sunday, they rested, went to church with their wives and children, and after church talked with horror about the eastern front where Russians were killing German soldiers, and commented on the barbarity of the Americans, who were dropping bombs on civilians.

Like Bush, Cruz has no way of determining which of the millions of Syrian refugees are Good Christians and which ones are just faking in order to jihad us in our own backyards, but he does know that anyone who admits to being Muslim is not welcome because that's crazy talk!

President Obama and Hillary Clinton’s idea that we should bring tens of thousands of Syrian Muslim refugees to America -- it is nothing less than lunacy.

We semi-agree. To speak of bringing tens of thousands of Syrians to America, when there are 4 million refugees and 12 million have fled their homes, is lunacy. We should be talking about much bigger numbers, for reasons we spelled out in our Official Wonkette Editorial Policy on Syrian Refugees.

We do not believe for a second, however, that any of the Republicans who are now demanding America close its borders to refugees -- except maybe the Good Christian Kind, but fuck those other ones -- will bother to do any reading at all. Not about the difference between ISIS and Al Qaeda, or Iraq and Afghanistan, or terrorists and Muslims, or, god forbid, the First Amendment of the United States Constitution. So as per usual, we invite them to simply fuck themselves instead.