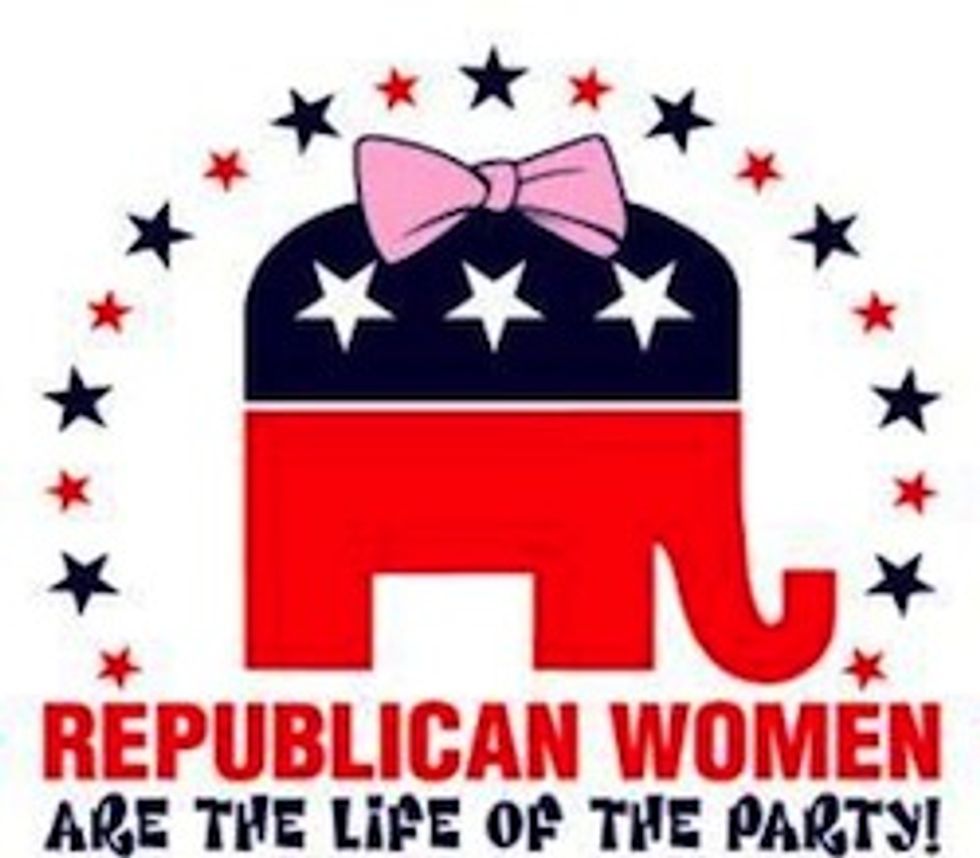 So since it's a day that ends in "y," Republicans have a shinier newer plan to make the ladies like them. It's basically like the eleventeen trillion other shiny new plans they've come up with since 2012 to make the ladies like them, and it'll probably work just as well. As in, not at all. But give Republicans their due: Just because a shiny new plan doesn't work the first time or the second time or the fortieth time -- like repealing Obamacare, say, or preemptively impeaching President Hillary Clinton for that time she Benghazi'd freedom -- doesn't mean they're just going to give up. Hell no, they are not cut-and-run defeatocrats. They are Republicans, and they will use their Republican sticktoitiveness to make a failed idea fail a THOUSAND times if they have to. So here's the new plan:

Surrounded in a room full of 400 people, primarily young women, Ayotte gave the keynote address at the launch party of RightNOW Women PAC on Tuesday night.

The new political action committee is the brainchild of former George W. Bush aide Marlene Colucci, formed to address what she sees as a dire disconnect between the Republican Party and female voters.

Ooooh. Scary. Democrats are definitely going to have nightmares about this. What could be more terrifying than Republicans launching a PAC to tell broads, "No, seriously, come on, bitches, love us"? Especially when it is being promoted by that lady Republican Kelly Ayotte, who is a LADY, plucked from senatorial obscurity to play the role of Joe Lieberman in the most ew-grossest Republican ménage à trois with John McCain and Lindsey Graham once Lieberman retired to spend more time staring at himself in the mirror.

Naturally, this shinier newer plan has the ringing endorsement of feminist hero John Boehner, who thinks it's a swell idea for the girls to try to get some other girls to wear their fashionable elephant pins because he can sometimes do a little bit of remedial math and acknowledged that more voters is better than not more voters.

“No one would ever believe that there would be this big of a crowd for a young women Republican event,” Boehner said Tuesday night. “My job is to grow the party, not, like some, to shrink the party, so to see all of you here tonight at this kickoff event warms my heart.”

Wait wait wait, his job isn't "like some" to "shrink the party"? Who's he talkin' bout Willis? Is it Ted Cruz? It's probably Ted Cruz, right? Or just "the entire Tea Party"? We will go with that. Yes, yes, we are also shocked to learn Boehner has a heart, since we thought it was just a tiny shriveled raisin that pumped nicotine and booze through his orange veins, but this is a new day for the Republican Party, and they are totally serious about pretending to be totally serious about reaching out to all those voters who hate them. And hey, they might even dig up a lady Republican to run for president, just to make you dumb broads happy.

The group is focusing heavily on 2014 but already has eyes open for a Republican woman to run for the presidential nomination in 2016.

That is a mighty fine plan, since we all so thoroughly enjoyed that time Michele Bachmann tried to be the first lady president. It worked so well for her. And by that, we mean it worked so well for those of us who make a living from making jokes about all the endlessly humorous dumb shit that stumbled out of her mouth while she was running on a platform of embracing the spirit of John Wayne Gacy and banning vaccines so they don't turn you instantly retarded.

So who will the lucky lady be? Perhaps New Mexico Gov. Susana Martinez, who is a lady Republican, and a governor of a state, and has managed thus far to not embarrass herself too badly. Although if Republicans want a lady governor, we humbly suggest Arizona's Jan Brewer, who was an awesome Republican until she went back on her meds and decided she did not hate Obamacare after all and Santa is all the colors of the rainbow like Benetton. If the GOP wants to get super creative, we hear Victoria Jackson is pondering public service, and she already has the perfect platform to edumacate her fellow Mericans "on Common Core, Agenda 21, the Muslim Brotherhood, and the urgency of getting involved in the political process, putting integrity back into office and halting the encroaching communism." Seems like a shoo-in!

Please consider these very serious candidates what we found for you, Republicans, while we go wrap ourselves in our blankies, sucking our thumbs as we try to recover from the "nightmare" of your latest plan to convince chicks that they should definitely vote for the party that would like to take all of their rights away from them for their own good. We'll be sure not to wear our nighties, though, so we don't get spousal raped, which we hear is a thing you don't think is actually a thing anyway.