GOP Ladies Cool With Letting Menfolk Do All The Presidenting, Thanks 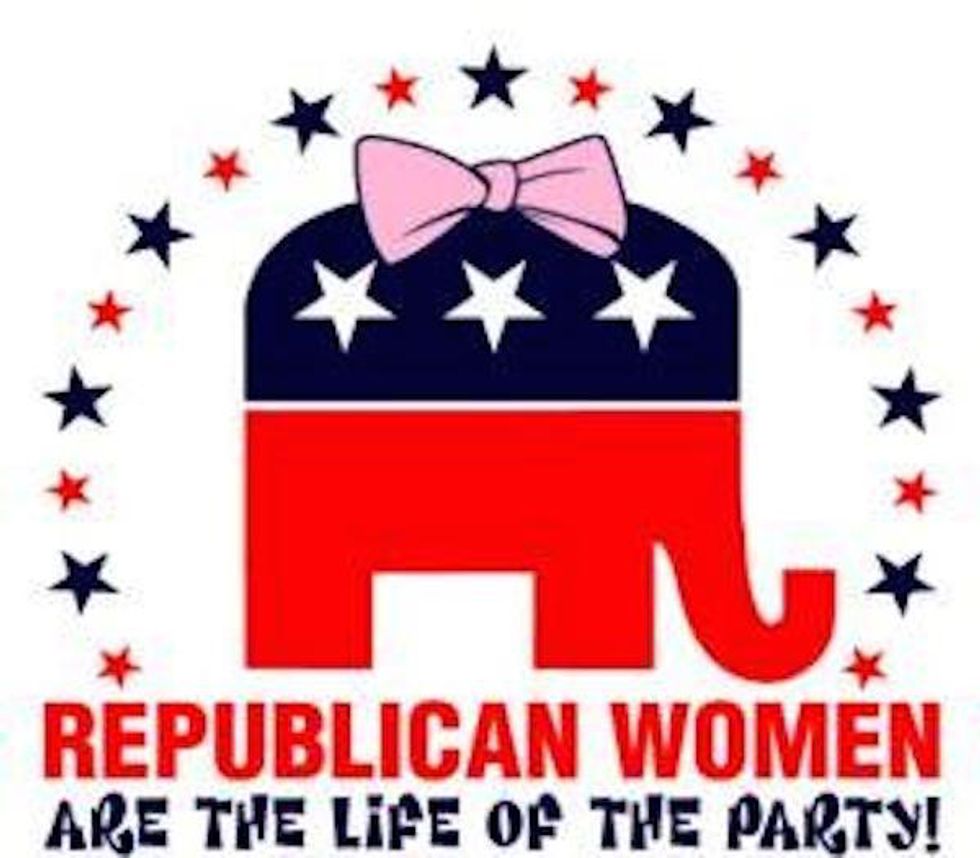 We all know the GOP is the real party of, by, and for chicks because they have told us SO many times. But that doesn't mean they care about how Chick-Americans are doing in these American United States. Or whether Chick-Americans ever obtain anything laughably approaching equality in the workplace or our government or anywhere else, really. Come ON. It's one thing to have campaign ads that show pictures of Republican women being Republican -- and women! -- but it's something else entirely to care about whether those pretty ladies ever hold any actual power.

A Pew Research Center study found some super interesting facts about how we really feel about women in leadership, and you'll be shocked and amazed to learn, among other verrrrry interesting facts, that Republicans, even the lady kind, really do not give a damn:

But this seems like bad news for, oh, say, Republican lady and professional failure at everything Carly Fiorina, who has been begging the Republican Party to beg her to "Run Carly Run." She's even started hiring campaign staff, just in case that ever happens. (Spoiler: It will not happen.)

Bad news too for Tennessee Rep. Marsha Blackburn. She's sort of the blond Michele Bachmann of the House (oh, Michele, how we miss you already), in that she also loves to hate 'bortions and 'Bama and buttsex and whatever other evil liberal plots are lurking in her inbox from ScaryShitYourUncleFoundOnTheInterweb@aol.com. In 2014, she issued a non-denial denial about rumors that she might consider running in 2016, which everyone knows is the first step toward launching a run. She also insisted, reportedly with a straight face, "It is Republicans that have led the fight for women’s equality." No, she did not provide evidence for that on account of how there isn't any.

Not great news for the original Bachmann (see above re: oh how we miss you!), who retired from Congress to give America super cheap gas, sure, but that doesn't mean she is not willing to run again in 2016, since it went so well for her the last time. Or at least willing to Just Asking Questions about why the media doesn't speculate about her for a change, huh?

“The only thing that the media has speculated on is that it’s going to be various men that are running … They haven’t speculated, for instance, that I’m going to run. What if I decide to run? And there’s a chance I could run.”

Yeah, media, what if? Well, as we learned from Bachmann herself when she ran in 2012, she "grew up with three brothers and no sisters. That’s the best preparation for politics that any girl can have." So no, there was no gender bias against her of any sort. "I don’t feel in any way that I’m discriminated against." But then, huh, after her 15 minutes of leading the GOP primary pack was over, she had to at least wonder if gender -- as in, gosh, Republicans aren't very fond of uppity ladies who try to be in charge of things -- played some sort of role, just maybe.

We'd suggest that the complete lack of interest by Republican women in seeing a woman in the White House is bad news also too for the Mama Grizzly who once claimed that she was carrying on Hillary Clinton's legacy of glass ceiling shattering, what with being picked by John McCain pretty much exclusively for being a chick, qualifications or skills or knowledge or even a beginner's understanding of the English language be damned. (Yes, that is a fact). But despite her endless teases that maybe she will feel obligated, by God and Country And The Internet, to seek office again one day, we know Palin never met a challenge she wasn't up to, like serving an entire term as governor or completing a bus tour.

Is it any wonder the maybe sort of would-be GOP lady contenders for the 2016 presidential race aren't exactly having to fight off the grassroots masses of their base who think it's time for a woman already, damnit? Maybe sisterhood is only powerful in the Democratic Party. [contextly_sidebar id="cxivdvSCQXBl7iYx9DYFOqyxXY99xe6Q"]

Here's another fun tidbit from the Pew report:

Americans are less doubtful when it comes to politics: 73% expect to see a female president in their lifetime.

So most Americans figure eh, it'll probably happen. But Republicans really don't care if it does. Whatever. The feminists killed the patriarchy anyway, so that's all behind us now, thank god. We're not just post-racial; we're post-patriarchal too. That's why there are so many women in elected office.

As the 114th Congress gets underway, a record number of women (104) will be serving in the House and Senate. Today women make up 19% of the Congress, about double the share from 20 years ago.

And some of them are even Republicans!

We assume the reason only 20 percent of GOP ladies have any desire to see one of their own shatter that highest and hardest of glass ceilings is because they are as gender-blind as they are color-blind. At least, the menfolk in their party keep telling them that's the case, so who are they to argue?

Hmm, well, maybe Republican women are only willing to admit they haven't fully achieved equality just yet when they're whispering on the phone to a pollster, so long as their husband isn't around to overhear it. Or maybe they can't quite connect the dots between More Ladies In Power and Better Life For Ladies. Or maybe it's just idiot Democrats who are under the impression that there's any connection at all.

For now, though, we can at least enjoy Republicans insisting they are the ones who care about women. In theory and campaign ads, anyway, if not in actual positions of power.