GOP Loves Troops So Much, Will Cut Troops' Housing Allowances 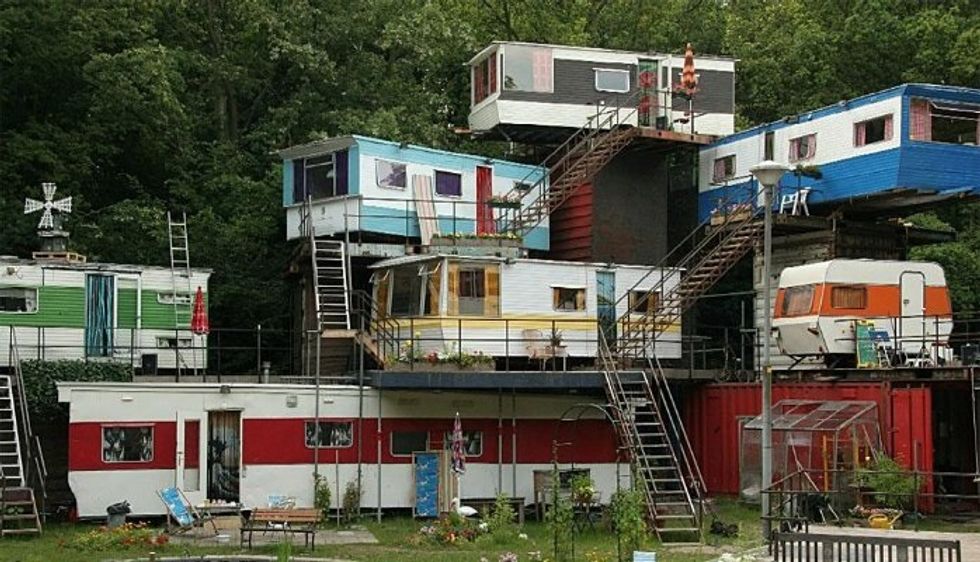 Not actual off-base housing. YOU find a funny image for "military housing allowances"!

Excellent news, America! The Senate is finally ready to do something about wasteful military spending, so shut your liberal yaps about cuts to schools and food programs and roads and shit; Republicans have got this: They love the troops so much they're fixing to cut the troops' housing allowances. What, you thought they might cancel the shitty F-35 fighter jet that costs billions and can't fight as well as current planes? Pfft. We need that thing and the defense jobs it generates. Instead, the Senate is poised to make some cuts that will save about as much money as cracking down on office staff pilfering paper clips, but will also make life just a little bit harder for The Troops, who are clearly living it up too much. Aaand it just might pass, because it's a teensy little change tucked into the annual Defense budget, and who has time to read every little bit of that?

Think Progress explains how things work now and what the proposed change would do:

Currently, armed service members who live off-base in the United States receive a flat-rate stipend called the Basic Allowance for Housing (BAH), which is calculated based on their family status, rank, and cost of living by zip code. If they find housing for less than the allotted benefit or live with a working spouse or roommate, how they use the extra money is up to them.

The housing benefit is meant to help service members cope with frequent required moves, which also often mean that the military paycheck is the only one coming in, as many spouses are forced to sacrifice their own careers.

But the Senate version of the National Defense Authorization Act (NDAA) includes a provision that would trim this extra money from service members.

Well, gosh, if some of The Troops are being overpaid for their rent, then doesn't it make sense to eliminate waste and fraud and abuse? After all, says a report accompanying the bill, it used to be, back in the 1990s, that service members had to pay up to 22 percent of their wages for housing. But now, thanks to the stipend system, there are some service members pocketing more money than they actually pay for rent. So under the proposed change, instead of getting a monthly allowance, service members would be reimbursed for whatever costs less: a set amount for their Zip code, or the actual cost of their rent and utilities. That'll teach those high-living military families to stop whooping it up with all their extra cash! The report doesn't actually provide an estimate for how much the savings would be, or how much it would cost to process the individualized reimbursements instead of simply paying out a set amount each month. It would probably be free!

Advocates for military families are against the cuts, arguing

that the stipend -- and the flexibility it currently affords — is an important part of compensation for service members and military families, and helps fill the gaps left by basic pay and benefit shortfalls.

For example, a sergeant in the Army, either with 4 years of military experience or having come in at an elevated rank due to an associates or bachelor’s degree, earns a little over $31,000 a year from basic pay. At that rate, finding a deal on housing and pocketing a few extra hundred dollars a month can make a real difference, particularly if they have dependents.

The Defense Department isn't so hot on the idea either, and in a report submitted to the Senate predicted the cuts could hurt recruitment and retention of service members, and would "unfairly [penalize] dual military families and troops with roommates":

“While potential savings could be achieved ... providing a degraded compensation package to one member, solely because of that member’s status of being married to another member, and co-location, stands in direct conflict with the principle that a member is paid regular military compensation in exchange for his or her service,” the report states.

So while the most expensive chunks of the military machine keep going up in price, the Senate is happy to nickel-and-dime The Troops -- they LOVE the troops, just like they love Lamp -- wherever possible. Beyond the proposed changes to the system for compensating off-base housing, Congress has already taken the budget axe to military salaries and benefits:

[Basic Allowance for Housing] rates are scheduled to drop to 97 percent of expected area housing costs in 2017, and the proposed Senate pay raise for troops next year is below private sector wage estimates for the fourth year in a row.

Hahaha, silly soldiers, sailors and airmen. If you want to make a living wage, you should go out and work in private industry, especially if you can sell stuff other than your service to the Defense Department.

Oh, yeah, and thanks for your service. Maybe the NFL can schedule a flyover at a football game to show how much America supports you.